One of the first saber-toothed cats 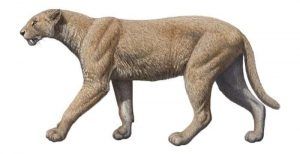 The Machairodus was a genus of prehistoric mammals that inhabited our planet not long ago (compared to the dinosaurs), during the Cenozoic Era, specifically during the Neogene period (about 12 million to 200 thousand years ago approximately). It is classified within the group of the feline mammals.

This genus would have been from the ancestors to the current felines. What is really curious about this animal is that it had both primitive and advanced features. For example, the skull and the two protruding fangs that it had are found in both the cats of its time and the current ones.

If you are interested in finding out more about this specimen… Below you will find much more detailed information about the Machairodus. Do you dare to discover everything about this prehistoric cat?

What does the name Machairodus mean?

The first discovery of this cat was in 1832, by the German biologist JJ Kaup, based on fossil remains of some jaws, due to the characteristic elongated fangs decided to call it Machairodus.

Since then the term Machairodus, was used as a generic term in which other species known as “sabre teeth” were classified, for example the Sansanosmilus, Paramachairodus, Megantereon, of Homotherium among others.

Over time, more fossil remains were found, which helped to learn more about the physical characteristics of this genus. So the term Machairodus would be limited only to name the first specimen found by Kaup in 1832 the Machairodus aphanistus in North America.

One of the last findings was in 1991, when almost complete skeletons were found in the Battalion Hills. This skeleton showed that it was an animal with a size similar to the current lion. It had a long and strong neck and was short-tailed. It also had a fifth finger on its limbs. This specimen was described by Sotnikova in 1992 and was called M. laskerevi.

The differences between these species of the same genus were mostly evident in the size, position of the teeth, shape of the front legs and differed in the color pattern.

Where and when did the machairodus live?

This cat inhabited the Earth in the time between the upper Miocene and the middle Pleistocene; already about 11.6 million to 200 thousand years ago. It managed to expand and conquer many habitats and is believed to have lived in Europe, America, Asia and Africa. 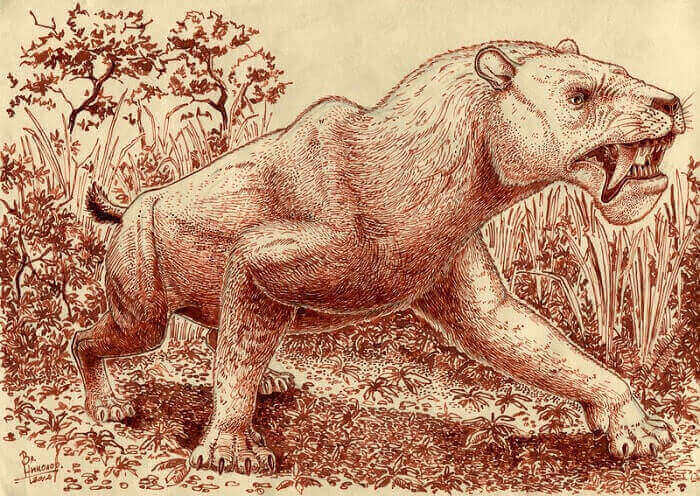 About its habitat it is believed that it was very diverse, it could inhabit plains with warm climate and also be present in colder climates. Without a doubt it was one of the animals that best adapted to the environment around it.

What did the machairodus eat?

It is evident that these big cats were exclusive carnivores. They fed mainly on other animals, becoming one of the most fearsome predators of their era.

They feed on local herbivores like the Hipparion or the Metridiochoerus. Some researchers even point out that it could feed on mammoth offspring. On the other hand it is also believed that it fed on carrion.

This big cat could reach heights of up to 1.3 meters, be 2.8 meters long and weigh about 350 kilograms.

Its skull was narrow, it had fascinating features since, according to researchers, it combined primitive and advanced features, it had a skull characteristic of the cats of its time (and current ones) with two protruding fangs, although not as big as those of other sabre-toothed cats, its lower canines were short and its incisors protruded a little.

It had a strong muscular neck and was relatively long, had a slender body and had a short tail. Its legs were robust which did not allow it to travel long distances. In fact, as far as its physical form was concerned, it had many similarities to many modern cats.

As for the lifestyle, many researchers compare it to that of today’s lion, speculating that it hunted in herds, thus ensuring success in hunting.

But the most accepted theory by the scientific community is that it had a solitary life and hunted by stalking its prey, hiding in the tall grass or near water sources, waiting for its opportunity, getting as close as possible to its prey, until it could attack them, knock them down and bite the neck of its prey with its powerful jaws.

The males were generally larger than the females. When one was on heat, several males sought her out to have a chance to reproduce so it is believed that she had strong fights with others of her own species.

Usually in its habitat, it had to compete with other carnivore species such as the Magericyon, so it follows that the Machairodus was a very territorial cat as are some of its current relatives.

Regarding the extinction of this feline, many researchers point out that it became extinct 200 thousand years ago, in one of the glaciations that our planet suffered at that time. This was characterized by low temperatures, dense snow and ice layers that covered large areas of land throughout the continents, which directly impacted the lives of many species.

These glaciations caused a drop in sea level, the tropical forests were shrinking, the vast green plains disappeared, this caused the death and extinction of a large number of animals among which were usually those that fed this great cat, which greatly reduced the possibilities of food that had. Added to the climate change of the time that surely affected them to a great extent as other species.

It should also be mentioned that at that time the ancestors of the current humans already existed and had a life of hunter and gatherer, so many of these cats were hunted, all in order to get their fur to make clothes and meat to feed.

Some curiosities about the Machairodus

The Machairodus is considered the ancestor of most of the “saber-toothed cats”, many researchers believe that the other breeds of these characteristic cats, such as the Smilodon and the Homotherium, descended from it.

Many times this species of cat is called “saber-toothed tiger“, but this denomination is wrong, since these are not tigers.