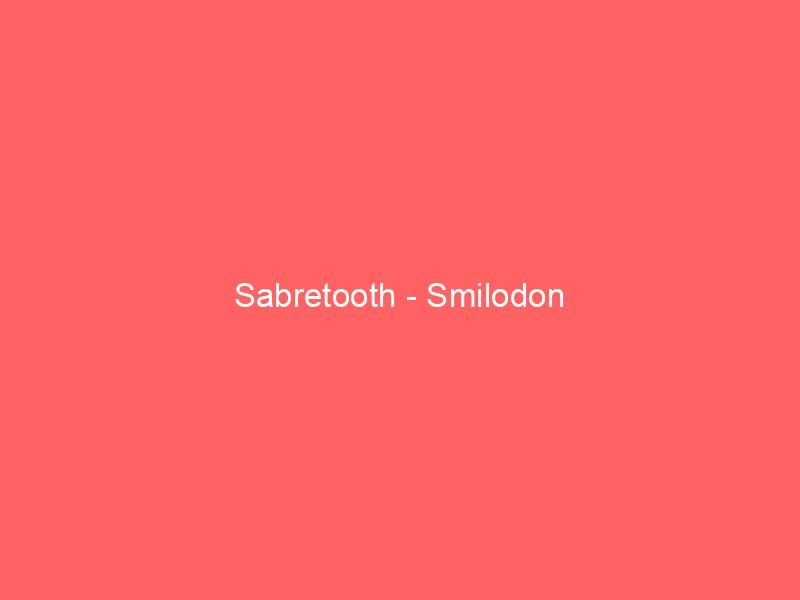 The sabre tooth is a large cat whose main feature is based on having huge canines whose size was on average about 17 cm and logically protruded from the sides of the mouth.

They are also known as “‘Tiger or Lion’ Sabre-tooth” but these terms are not entirely correct, although physically they resemble them.

In fact, one of the species of Smilodon, the Smilodon populator, was as big as our current Bengal tiger, but it was much more muscular and strong, and in terms of weight it was much bigger than our current tiger, weighing up to 400 kg.

Furthermore, we must take into account that within the Sabretooth family we find the subfamilies of: the Macairodontes, the Smilodon, the Nimrávidos, the Creodontos and the Tilacosmíldos.

These subfamilies have their own characteristics and lived at different times and places on the planet.

Without further ado, let’s get to know these huge toothed cats, whose extinction is still not very clear, as there are two hypotheses:

Taxonomy of the sabre tooth

Of the subfamilies we have named, we will focus on Smilodon and its species. More than anything not to make an endless post as well as confusing by mixing some species with others, dates and places.

Who and when was the Smilodon sabre tooth discovered

The Smiliodon populator sabre tooth was discovered in 1841 in caves near Lagoa Santa, a village in Brazil, by Danish naturist and palaeontologist Peter Wilhelm Lund, who travelled to Brazil several times, the first time to collect a collection of plants and insects.

He got to know the caves in question through his compatriot Peter Claussen, discovering the fossils of the sabre tooth and other species from the Ice Age.

Joseph Leidy in 1869 discovered Smilodon fatalis. This species of sabre tooth was somewhat smaller than that of Smilodon Populator; it weighed about 200 kg and was a little over a meter high.

The sabre tooth Smilodon gracilis was discovered in 1880 by Edward Drinker Cope. It is the oldest of all the Smilodon species and also the smallest as it weighed a maximum of 100 kg.

Rancho la Brea is made up of a large number of tar lakes that are currently located within Hankock Park in California and is also the place where the largest number of fossils of different species from the Ice Age have been found, with more than 10,000 species of animals, including birds, mammals, reptiles, etc.

Here too, is where more Smilodon fossils have been found and where in fact the only Smilodon with a closed mouth has been found.

When they fell here, the animals could no longer get out because the tar is sticky and thick and prevents the movement of the animal, which is gradually swallowed until it disappears, like quicksand. Or you have someone to help you and save you the moment you fall or say goodbye, because the more you move, the faster you will bury yourself.

The Smilodon is the most popular prehistoric mammal, which is most often depicted in both documentaries and cartoons, such as the film Ice Age, for example.

The name Smilodon means “knife teeth”. In fact, its huge canines protruded from the sides of its mouth and could reach up to 17 cm in length, with a bite that was fatal in a matter of seconds.

What studies have shown is that it did not have a jaw strength superior to that of today’s lion and that they could not bite and hold a prey while it moved, but when it was really dangerous and deadly the Smilodon’s bite was when the prey was contained and immobilized on the ground.

It is in these situations that its canines perform their task, which was to tear the prey. The tusks, in addition to their curved anatomy, ended up in a pronounced point to easily penetrate their victim, these canines were sawn in its interior. So when it pulled them out of the body of its prey, they completely tore away everything in their path – skin, flesh, veins and arteries.

If, by any chance, the prey escaped once it had been bitten, it would bleed out in a matter of minutes and be easily recovered by the sabre tooth.

Another characteristic of the Sabretooth was its great musculature, especially that of the Smilodon populator, which was very robust and sturdy. It could weigh up to 400 kg, although its size, in terms of length and height, would be like our current Bengal Tiger. It is the “muscular” of the felines of all times.

Due to this great muscular complexion, long-distance running was far from being its strong point, and even less so when temperatures began to rise after the last glaciation.

Another reason why it is believed that he was not a great runner is because he had a short tail, which measured about 35 cm.

It is known that today’s cats have a long tail that helps them balance during the race.

Other notable characteristics of Smilodon are:

These qualities result in the Smilodon being more like a lynx than a lion or tiger.
I’m sure you understand why we said at the beginning that it’s not totally correct to call him a tiger or a lion, right?

Where and when the sabretooth lived.

The Smilodon sabre tooth lived in North and South America from the Pliocene to the Pleistocene. And one of the reasons why it is believed to have become extinct during this period was due to climate change.

However, there is also a theory that it suddenly ran out of anything to hunt, apart from the appearance of man who started hunting his own prey, leaving it without food. Because it does not seem that at any time man has hunted him directly. But the latter is yet to be confirmed.

What is known with certainty is that the Smilodon lived in the great plains of both North and South America, where there was a great abundance and variety of vegetation that served to feed the great herbivores on which this great sabre tooth fed.

Studies have shown that one of their main prey was the mammoth, so hunting was in groups and was based on ambushes, just as lionesses do today. In both cases they stalked their prey from the sides until they cornered the prey.

In the same way, it is clear that their attack would be based on holding and throwing the prey to the ground with their powerful and strong front legs and then biting its neck, preventing the arrival of air while breaking the jugular and tearing the main veins and arteries, making the animal bleed almost instantly.

Every day it seems to become clearer that the sabre tooth specialized in hunting large prey, such as bison, deer, elk, mammoth (which we have already mentioned), giant sloths, etc. And it was this specialization that also led to its extinction.

What is also clear to us after these studies is that the wear and tear on their fangs is not because they gnawed at the bones of their prey, but because of the number of times they hunted. They were the kings of hunting at the time.

The long tusks were held by both males and females, and even the size of the animal between the sexes was similar. This would make us think that by living in packs their behaviour would be similar to that of hyenas or wolves, for example. Although it is not known who would dominate the group, that is, it is not known if it would be a matriarchal pack as in the case of hyenas or if the strongest specimen would simply lead the group, regardless of its sex, as is the case with wolves.

Although studying the fossils found of groups, it has been concluded that the groups were dominated by one or two dominant males, which took care of the whole pack. Just as lions do today.

Thanks to these fossils it has also been possible to find out that they looked after each other and shared the food. This assumption was made when several Smilodon were discovered with broken bones that were healing, which if they had lived alone and independently would have died long before that bone began to weld.

And yes, even though they were the kings of the hunt, like all the animals of that time and ours, they also had enemies that attacked them such as the giant wolf, the bulldog bear, the short-faced bear, etc. Well, and perhaps man, although as we have already mentioned that is yet to be demonstrated.

As we have already mentioned, the sabre tooth is not the ancestor of lions or tigers, although they all come from the upper Oligocene, some 23 million years ago, when the Proailurus lived, which is the first known felid and whose size would be similar to the Iberian lynx.

Six million years after the appearance of the first superhunter, a division of the felidae of the Macairodontines occurs again, appearing the Promegantereon ogygia, which is like a leopard, and the Machairodus aphanistus, which is like a Siberian tiger

And from the subfamily of the Machairodontinae comes the Promegantereon which is the first of the Smilodontines, which will end up becoming the Smilodon, first it will be the Smilodon gracilis, then the Smilodon fatalis and finally the Smilodon populator, the biggest of all and the biggest king of the hunt in the Ice Age.