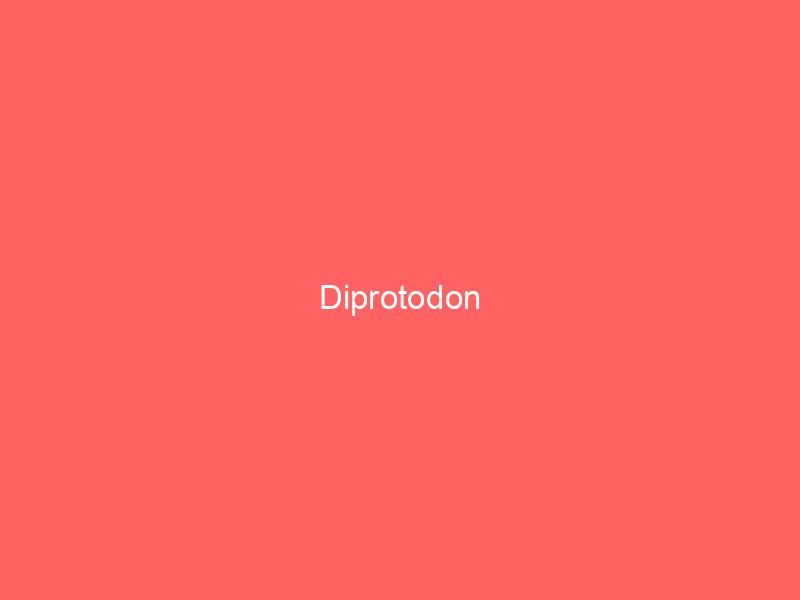 The Diprotodon was a genus of prehistoric mammals that inhabited our planet not long ago (in comparison to the dinosaurs), during the Cenozoic Era and more specifically during the Quaternary Period (approximately 42 thousand years ago). It has been classified within the marsupial mammals.

This genus would have had, relatively speaking, a large size. This ancient marsupial was about 3 meters long and 2 meters high. To understand us better, it would have been the size of a modern-day rhinoceros.

The Diprotodon would have been a herbivorous animal that moved in herds as a method of defence against predators. It was a very slow animal and moved very slowly, making it easy prey.

If you found this interesting, what you read… Don’t go! Here’s a lot more information on the Diprotodon. Stay and find out all about this Quaternary marsupial!

What does the name Diprotodon mean?

The meaning of the name Diprotodon is “Two Front Teeth” a name that comes from Latin and was coined, because of its two large front teeth.

The remains of this great mammal were first found in 1930. In Australia, more precisely in New South Wales, by explorer and surveyor Thomas Mitchell. Who later sent the remains to England for analysis and description.

This marsupial was described eight years later, more exactly in the year 1938 by the respected biologist and paleontologist Richard Owen, who named it Diprotodon.

Later, more was found by the explorer Ludwig Leichhardt, who found many remains in Australia, more precisely in the region of Darling Downs in the state of Queensland.

The biggest finding of fossil remains was in Callabonna Lake, where many of these mammals were trapped by the mud, in fact this lake in the Pleistocene was a dangerous trap for animals, because this river was rich in salts and other minerals, added to that at that time the climate was becoming drier and dried up the river, leaving then a big trail of wet mud that trapped most of the animals that tried to cross the river, among those our toothy friend.

As a result, many of the fossil remains found were very well preserved as far as their lower parts were concerned and the upper ones in some cases were more deteriorated. Along with these fossils, remains of Phascolonus, Protemnodon, Sthenurus were also found.

From the different findings over time, at least 8 species differences were achieved:

The last species found was in 1877 and was named by McCoy as Diprotodon bennettii Owen.

So in many cases only the first species described (D. optatum) is taken into account.

How and when did it live?

It lived about 42 billion years ago in the Pleistocene.

The natural habitat of these creatures was generally forests, savannahs and extensive green plains, which were always close to water sources such as lakes and swamps.

It is believed that the Diprotodon spent most of its time in the water, just as hippos do today.

It was an herbivore, usually feeding on trees, plants, grasses, shrubs, algae or aquatic plants. It is believed that it was capable of felling trees with the help of its two large incisors. And judging by its size, it’s thought that it had a big appetite.

These real animals were large and could reach a length of 3 meters, 2 meters in height and weigh about 2 tons. In addition, it had characteristic large teeth to which it owes its name. Its size is often compared to that of a modern-day rhinoceros.

This marsupial was plantigrade, i.e. it leaned on the soles of its legs to walk as bears or we humans do today, which made it easier for it to bear its enormous weight and stand on its two legs with ease.

It was covered by a large coat and was also provided with two large jaws, it is believed that it had a slow metabolism.

Its claws looked inwards like those of the uombats, and it also had a bag on its back in which they protected their young. The curious thing is that these bags were invested, their entrance was from the back, all in order to prevent the young from filling up with soil, as the Diprotodon used to dig for food.

It is believed that they lived in herds, a conclusion made by the already mentioned finding in the Cabamolla River where more than 100 specimens were found.

It was of a calm behavior, since it had a slow metabolism, reason why it moved with special patience and slowness. So it was an easy and juicy prey for many predators.

On the other hand it is believed that it used its teeth to cut off parts of the plant it wanted to eat or to cut down trees to feed on its foliage.

As for the natural predators of this marsupial, on many occasions it was the dinner of the so-called Marsupial Lion (Thylacoleo carnifex) and the Megalania prisca, it is even believed that many times it was attacked by the extinct Quinkana crocodile when it approached to drink water in some water source.

Theories of its extinction

With regard to the climate, it is believed that at the time the Diprotodon was living, Australia was undergoing significant changes in its habitat and ecosystem, moving from being a continent rich in vegetation and with many water sources to a more arid and dry environment.

That over time affected the survival of these large mammals.

It is true that dry habitats were nothing new to the Diprotodon, but the increase in arid areas, were diminishing the space in which it could live. This led to overpopulation in small green areas, which resulted in a lack of food.

So the youngest, oldest and most injured Diprotodon bore the brunt.

Added to these came to the area what would be the first humans, so many of these marsupials served as food. They represented an easy animal to hunt and also provided a large amount of food to feed many people and for a long period of time.

All of this was reducing the total population of Diprotodon.

Another of the human actions that endangered this species would have been agriculture. At that time the first humans used to burn large plains in order to fertilize the soil and plant edible vegetation for them.

The damage would be exactly in that many of these new plants were not edible for the Diprotodon and the ones they usually consumed took much longer to grow back, which reduced their food choices and therefore their survival.

It should be noted that despite these conditions, they alone were not capable of completely extinguishing the entire population of this great marsupial.

However, when they all came into play at the same time, they were undoubtedly devastating for the general population.

The first humans settled in Australia about 50,000 years ago, by which time the fauna began to change and the Diprotodon began to disappear. So many paleontologists agree that such a theory

Some interesting facts about the Diprotodon

This animal, is very characteristic of Australia, in fact many of his remains were found in that place, so in that country was paid tribute to that mammal.

Producing a series of silver coins called “Australian mega fauna”, in this coin you could see the Diprotodon on the back of the coin in a relaxed posture with a rich vegetation on its back.

Later, more coins were produced with other extinct animals that once inhabited such a beautiful Australian territory.