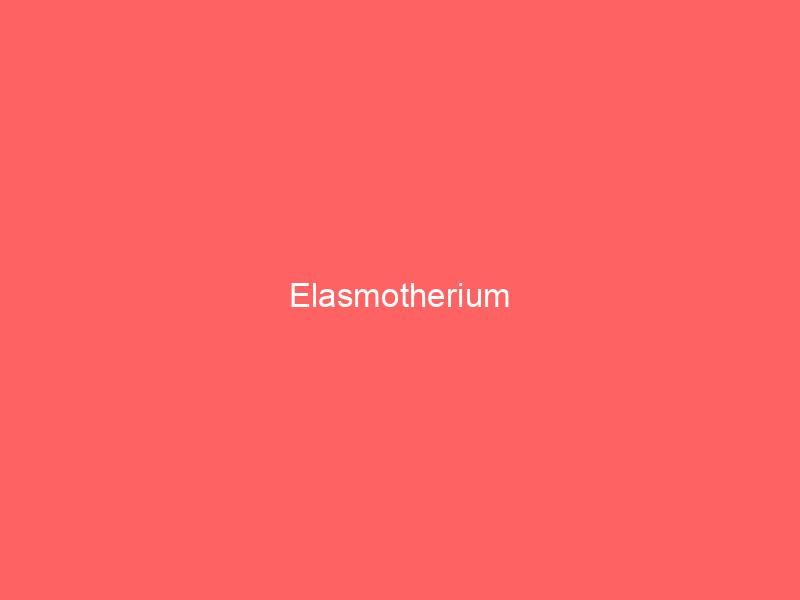 Elasmotherium is a genus of perissodactyl mammals of which three species have been found, representing a spectacular prehistoric animal also known as the Asian rhinoceros.

This magnificent mammal inhabited our planet until not so long ago, so much so that it even lived for a long time with the first human beings.

It developed its existence during what we know as the Cenozoic, although within this general classification, the Elasmotherium lived specifically during the Quaternary Period.

The most characteristic feature of the Elasmotherium was undoubtedly the great horn that it possessed, in fact it is believed that because of this this animal was the origin of the legend of the unicorn.

The main difference between this genus and today’s rhinoceroses is undoubtedly the size, for this very reason the specimen featured in this article is considered to be the largest rhinoceros in history.

Do you want to discover more about this extinct animal? Then read on to find out extensive and detailed information about the Elasmotherium.

Within the genus Elasmotherium we can find three different species, they are the following:

It is necessary to mention at this point the possibility that in the future new species of this genus will be found or on the contrary some will be discarded, that is why this information cannot be considered definitive, this will only be determined by possible new scientific findings.

For this reason, we will do our best to keep this section updated in case of future changes in the taxonomy of this animal.

Basic information about this prehistoric mammal

The Elasmotherium was undoubtedly a particularly fascinating specimen, which is why, despite our special dedication to dinosaurs, we believe that this extinct animal deserves an exception.

However, we must be very clear that this is not a dinosaur, but a prehistoric mammal that inhabited our planet a few thousand years ago.

Next we will show you some basic data that have been able to be known thanks to the scientific studies carried out and that will allow you to approach a little more to the appearance that this animal possessed.

So, let’s look at what the main features, characteristics and information about rhinos are.

The first thing that jumps out at the rhinos is their large size. In fact, they are currently one of the largest land mammals in the world, weighing up to a tonne in most species today.

The skin that covers its body is really thick, reaching up to 5 centimeters in thickness, which gives it protection.

The sizes of the brains of the rhinoceros family are relatively small in comparison to their enormous body, this small cranial size may exist in this form to make room for the enormous horn that protrudes from their nose.

Generally, the horns of different mammals are made up of a bony core. This is not the case with the rhino horn, which is composed solely of keratin, a structure that we humans also possess in our nails or hair.

With regard to their diet, they mostly feed on plant leaves. Even so, their hind intestine has the ability to ferment the food, allowing them to eat more fibrous vegetables if necessary.

In this approach to the Elasmotherium family, it is useful to take a moment to understand the etymology of the word rhinoceros, a word that comes from the ancient Greek and could be translated as nose horn.

Rhinoceroses are in danger of extinction

The rhino family in general is currently in a serious state of extinction. Humans are to blame for this, as apart from young rhinos, this animal has no predators that want to eat it.

Young rhinos can be hunted as prey by crocodiles, hyenas, wild dogs or big cats. However, adult rhinos are too large and robust to have any adult predators except for humans.

The main problem that rhinos face is human hunting, and that is that in recent years poaching of rhinos has increased.

Despite the efforts made by the authorities, it is estimated that only 3% of poachers are combated, while the rest continue to hunt these animals.

The problem is made worse by the fact that rhino poachers are underdeveloped South African countries.

The purpose of hunting these animals is to obtain their horn. Currently the biggest consumers of rhino horns are the Vietnamese. The rich Vietnamese like to turn the horn into powder and then inhale it as a sign of their status.

Not only because they have something unique, but also because of the aphrodisiac properties they are believed to have. There is also a popular belief that inhaling rhino horn is a way to fight cancer.

Many very drastic measures have been taken that do not achieve great results. The most effective solution that has been found is to remove the horns from these animals.

For this reason, in some areas they have started to tranquilize the rhinos and after removing their horns they are released again. However, some countries have taken more drastic decisions such as killing poachers who are seen during the act.

What has worked best is reassuring the rhinos and removing their horns to avoid the poachers.

All they want is a rhinoceros horn, since it can be sold on the Vietnamese black market for at least USD 250 000.

Several theories have emerged regarding the morphology of this animal. Some consider it as a trotting horse, others as a bison with its eyes pointing towards the ground and others suggested that they were immersed in a swamp like the hippopotamus.

Today, several of its characteristics have already been defined while many others have yet to be determined.

According to the samples that have been found of this genus, it is estimated that it would have reached up to four and a half meters in length. Nor would it have been short of height, as it would have had no less than an impressive height of two meters and even five meters as is the case of Elasmotherium caucasicum.

As befits its size, it also weighed in at around 4 tons. These estimates were made on the basis of isolated molars that significantly exceed those of other similar species.

The size of this genus equals and even exceeds that of the giant woolly mammoth. They were undoubtedly much bigger than today’s woolly rhinos.

Like contemporary Ceratomorphs, they also had horns. And like all of this family of animals, these horns were made of keratin.

What is striking is the absence of tusks, a very common characteristic among rhinoceroses but which this genus lacked.

However, the horn it had was so large that it is sometimes referred to as the giant unicorn.

The horn it possessed would have had several functions such as defense against predators, a sex appeal to court females, digging up dirt to find water and plants and also to sweep snow from the grass in the winter season.

It would have moved at a gallop, like today’s horses. This can be deduced from the great length of its legs, which are longer than those of other rhinoceroses.

In addition to this, they were quite muscular so it follows that they could have reached relatively high speeds for the heavy body they possessed.

The genus was named in 1808 by Johann Fischer von Waldheim, director of the Natural Museum of Moscow University. When he made this denomination it only had a lower jaw that was donated by Yekaterina Románovna Vorotsova-Dashkova.

The meaning of elasmos is layer, and it refers to the molar teeth and their formation in layers. The name of the species sibiricum refers to the area of Siberia, where the fragment mentioned above was found.

The life of Elasmotherium on planet earth

Now that we have a more general idea of what this animal looks like, we still need to talk about the length of time it was present on earth. That is why we will now go a little deeper into when and how the Elasmotherium lived on our planet.

The time range in which it lived goes from the end of the Pliocene to the beginning of the Pleistocene. Elasmotherium emerged 2.6 million years ago and became extinct about 29,000 years ago.

It is not really possible to attribute a particular area to this impressive prehistoric rhinoceros. The presence of this animal has been in several parts of the world, so it is considered that it could have been a common animal in its time.

The oldest known genus is from North America where it is deduced that this animal appeared. Then its presence spread to Asia, where remains have been found that date back to a little later than those in North America.

Their diet would have been varied, including grazing, mixed grazing and nomadic diets.

The enormous size that these animals had together with their imposing horn made them look like a very aggressive animal. Even so, despite what may be surprising, they were not predatory animals at all, but had a herbivorous diet.

Within all herbivorous animals there are two types or classes of these. On the one hand we have the large intestine fermenters and on the other hand those of the anterior intestine.

In the case of the foregut fermenters, the animal chooses the plants with the most nutrients and they are also ruminant animals. In contrast, the others do not usually choose plants with a high nutrient content, but simply ingest a large amount of food.

The specific case of Elasmotherium is more similar to the second option. It was most probably an herbivorous animal that moved from one region to another to eat tall grass.

This totally contradicts the normal position of its head, which would have had an angle where it could only reach the lowest levels of vegetation.

We hope you liked this entry with information about Elasmotherium. We invite you to use our comment box for any contribution, suggestion or doubt you may have regarding this incredible prehistoric animal. We will be happy to read your opinion!