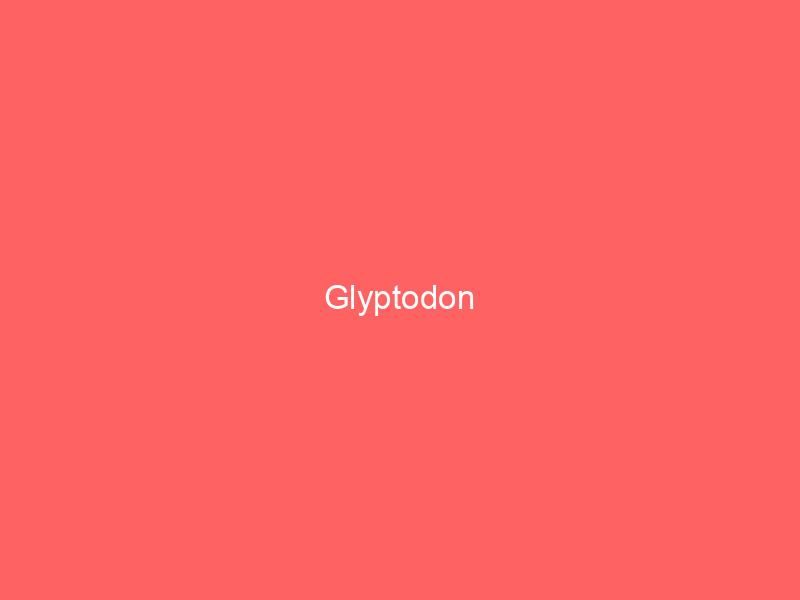 The Glyptodon was a prehistoric mammal that inhabited our planet during the Cenozoic Era, specifically in the Quaternary period, approximately 2 million years ago, and has been classified within the group of cingulate mammals.

Cingulate mammals are those included in the group classified as natural placental mammals of the American continent.

Having made that small parenthesis, we continue with the Glyptodon which is the ancestor of the armadillo, with a very striking difference between the two and that is that this ancestor is a giant armadillo.

Its name comes from the Greek and means “carved tooth” or “sculpted tooth”.

But this and other characteristics and curiosities of this prehistoric animal we will detail below:

History of its discovery

As has happened with other dinosaurs or prehistoric animals, at the time of their discovery they were misclassified and even confused with others.

This is just what happened with the first fossil found at Gyptodon, which was confused and catalogued as Megatherium.

Several years passed and several scientists with their respective studies until finally it was considered as a unique prehistoric animal.

We are going to detail this story in a more or less summarized and schematic way so that you can see everything that happened around this animal until it was finally identified and given a name.

Watch out! they had not yet baptized it, although as you see, they were trying to classify it within the taxanomy.

Although he was almost one of the last people to find some kind of vestige of the Gyptodon, it was thought that Charles Darwin was the first person to discover this animal.

In 1845, after Richard Owen analyzed all the fossils found so far, he divided the Glyptodon into four species: G. clavipes, G. reticulatus, G. ornatus and G. tuberculatus.

After that small outline highlighting the main dates and the scientists in charge at each moment. It should be noted that over the years more fossil remains of this species have been found, further expanding the information that until that date was available about this prehistoric animal.

After everything we’ve told you so far, you may have already pictured the Glyptodon as an armadillo. And you’re not wrong, although there are some differences between the two that we’ll tell you about next:

The Glyptodon is much bigger than the armadillo, measuring 2.6 to 3 metres in length, with a height of approximately 1.5 to 2 metres and weighing just over 2 tonnes.

Its skull compared to the body is relatively small. In fact, the skull found is about 42 centimeters long.

As for its teeth, they were flattened in the front to facilitate the cutting of the blades, while the rear had a cylindrical shape that served to crush.

On the other hand, he did not have good eyesight because he lacked photoreceptor cones, this would affect him especially when the light was missing.

On its short and solid legs and a column with the vertebrae joined together was attached its enormous shell; which was formed by osteoderms or plates, where the little more than 1000 plates that formed this shell had a thickness of about 2.5 cm.

This shell could be similar to the one that turtles have today, rigid and strong, only in this case the Clyptodon could not introduce its head in it.

The tail is also covered by these plates that made it strong and according to which species of Glyptodon it could vary in its morphology. For example, the G. clavipes had a tail covered by bony rings, being this among other characteristics a flexible tail.

On the contrary, other species had a rigid tail as they were formed by a single piece and there were also other species which had a kind of keratin spines in their tail.

At first, both its tail and its carapace could be thought to be exclusively to defend itself from predators, which also, but these also served to fight and defend themselves from other animals of the same species.

They reached this conclusion after analyzing the carapace of a G.reticulatus which had a damaged carapace on one side.

When and where did it live?

This mammal lived approximately 48 million years ago in the Pleistocene era.

It lived mainly in South America, in what would be today Brazil and Argentina; although remains of this animal have also been found in countries such as Uruguay, Bolivia and Paraguay.

In short, it lived in those places where grasslands were abundant, whether they were cold and dry, or just the opposite, hot and humid.

Let’s go! As long as there was grass to feed on it apparently had the capacity to adapt to any climate and place; and that is because the Glyptodon was an herbivorous animal that is believed to have fed in areas where there was a source of water nearby, such as a river or a lake.

In the same way, it is believed that in spite of its great size it did not need to eat large amounts of plants to sustain itself.

Theory of its extinction

Although humans and Glyptodons lived together for some 4000 years, everything points to the fact that they caused the extinction of this huge animal.

In addition to eating its meat, the most striking thing is that they used its shells to take refuge at night, as well as from the inclemency of the weather.

Evidence of the latter was found in Argentina, in Campo Laborde and La Moderna.