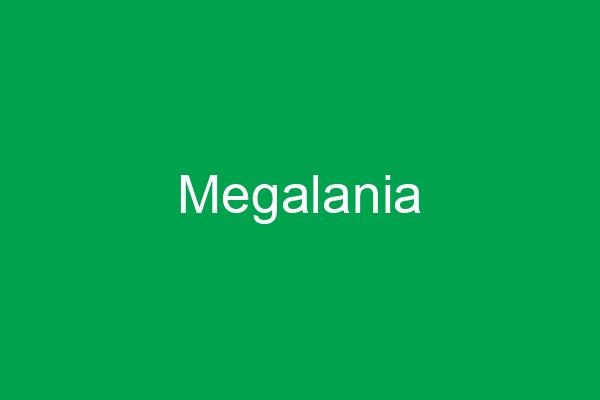 The Megalania was one of the largest specimens of varans that ever existed on Earth. The name Megalania has a meaning in Greek and is “giant wanderer” or “great wanderer”, because it was a great reptile of active movement. It was previously known as Varanus priscus.

It inhabited our planet during what we know as the Cenozoic Era (the present one) and within this era, it lived in the Quaternary period (the most recent one).

The Megalania was a reptile that belonged to the Varanidae family, a group of animals in which the famous Komodo dragons are found and which it would not have been afraid to confront because they were greatly outgrown.

The territory where this specimen was found is what we know today as the country of Australia, (Oceania), precisely in the southern region of that nation, and it has also been known that the specimen inhabited this territory some 40 thousand years ago, in the middle of the Holocene.

For this great reason it is believed that the first people who lived in that place perhaps had the luck or the bad luck of having lived with these huge specimens that really turned out to be very impressive.

This animal was given this name by a famous scientist and researcher known as Richard Owen, and as we have already mentioned its meaning was something that referred to the characteristic of wanderer that this animal presented, besides that it also referred to the great size that this specimen possessed.

In order to name this animal, the scientist himself had to make some deformations to certain words of Greek origin, and because of this, these Greek words are confused with other words of Latin origin and on several occasions the translation to the current languages has been confusing, they even thought that the word “lania” referred to a Latin word, which meant “butcher”.

When we say that this animal belonged to the megafauna we are referring to the fact that it was an animal of great dimensions, in fact the word “mega” itself comes from the Greek, which means big, and the term fauna has its origin or Latin roots, which comes to mean something like “animal” or “animals”.

But in order to know that an ancient animal is considered within this group of the megafauna, one must take into account that it must have at least one ton in terms of its mass.

But we must also take into account that according to scientists are considered within the megafauna all those individuals whose weight is over 100 kilograms, something that triggers a bit with the “big” because even a human being can reach that volume in his life, so the above reference is taken into account more often in the world of science to classify all types of animals.

However, when a scientist refers to an animal as a member of the megafauna, he is surely referring to a specimen that happens to have a larger dimension than we human beings, and also that these specimens are not domesticated.

These individuals placed within the megafauna we associate directly with all the specimens that lived during a period known as the Pleistocene, and some in the early and middle Holocene, those animals of great size, among which we can mention for example the mammoth and another whose name is that of glyptodonts.

In addition to all this, in scientific texts this term has also been used to introduce other large animals but not precisely too big, such as giraffes and even some moose, these were also considered part of the mega fauna even though their sizes are not as considerable as that of mammoths or other prehistoric mammals.

Perhaps elephants are within what we associate as megafauna, but if we compare an elephant to a mammoth, the elephant probably looks like a tiny specimen, the same may be true of condors and other specimens that have been mentioned as being part of this famous and controversial megafauna.

So far, there is no complete bone structure that could have been found that belonged to the great Megalania. Due to this detail, studies and analyses have been much more complicated compared to the study of other animals from the same period that also formed part of the megafauna.

Nevertheless, the scientists tried to make some calculations taking into account and starting from the fossil remains they had at their disposal, managing to determine in an approximate way that this specimen could not exceed 700 centimeters in length, while its weight could not be higher than 620 kilograms.

Those measurements were officially published some years ago, but there are recent studies that are gradually shedding new light and there is a rumor that those proportions are totally wrong.

So much so that already in our century, in 2002, Stephen Wroe was in charge of indicating that the true length of this animal could not be more than 450 centimeters, unlike the 700 mentioned above, and that its weight was a little more than half of what had been initially thought, in total about 331 kilograms.

Similarly, this researcher also criticized the bad methodologies that scientists of past centuries used to determine the size of the objects of study, so he recommends taking this detail into account and redoing studies using new technologies and even taking into account the new methodologies, which end up being more accurate and much more efficient.