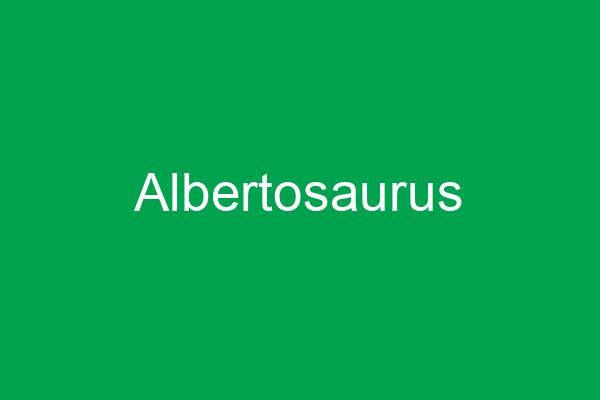 The genus Albertosaurus consists of theropod titanosaurid saurisky dinosaurs from the late Cretaceous, approximately 70 million years ago. The name of the genus means “Alberta lizard” due to the area where the first specimen was located.

On the other hand, it is not known exactly if one or two species are finally contained in this genus called Albertosaurus.

Due to this phenomenon we will only describe what happened and report on all the data we have available, because the scientific debate about these species generates many heated discussions in this world of Paleontology.

In addition, it has come to know that it only needed two of its limbs to be able to move from one place to another, while the size of its skull which was of large dimension was also similar to the size of other Tyrannosaurs.

This skull also had a quite powerful jaw structure, which contained within it numerous dental elements, which were perfectly designed for the ingestion of the flesh, it is said that there were dozens of teeth inside this structure.

It is important to note that this animal was perhaps the most important predator in its territory and during the years it lived, due to its size and the agility with which it could hunt.

If you want to discover everything about the Albertosaurus don’t miss the extensive information we offer below.

As for the most important findings, we can say that more than two dozen bone structures are within reach, which has allowed the most dedicated researchers to obtain a series of data and information about the animal that would have been impossible to obtain without those fortunate findings.

It is thanks to this that the anatomy of this animal is now something that is known to the general public, something that has not happened with other specimens also placed within the group of the famous Tyrannosaurs.

What is quite interesting about one of these findings is that a dozen creatures were found together fossilized, so it is quite likely that this animal also developed its life in the company of others of the same species, allowing the group to prosper in a simpler way and without so many complications.

This group finding also gives the option of being able to investigate the famous and interesting biology of development, an investigation that cannot be carried out on other dinosaur specimens because they are not found in the same circumstances.

As regards its size, we can compare it with another specimen known as Tyrannosaurus, which, in addition to being a direct relative of the dinosaur that is the protagonist today, turned out to be larger than this one.

Bearing this in mind, if we want to have an idea of the exact size of the Albertosaurus we must think more about a modern animal known as the black rhino, since the volume of this dinosaur was quite similar to the volume of this creature of our era.

As we had already mentioned, this animal turned out to be smaller than other specimens placed within the group of the Tyrannosaurids. It has been known that the specimens that reached maturity could have reached a maximum length of 9 meters.

But as we are highlighting, this was the maximum length, not the average length. On average, it was calculated that they weighed one ton, whereas the maximum weight that any of them could have reached is 1,700 kilograms.

Obviously we cannot confuse this smaller dimension that arises when comparing it to other tyrannosaurs with the fact that Albertosaurus had a small wingspan.

On the extremities of this animal we can give some details, and it is that the extremities located in the front area turned out to be of a smaller dimension if we get to compare it with the rest of its body structure, besides that we can see that just at the end of these extremities we can only find a couple of fingers.

On the extremities of the back zone we can say that these had a greater extension and just in the end it did not present a total of two fingers but of four.

The Albertosaurus toes have a peculiarity and that is that one of them was really smaller, it was practically tiny, on the other hand the other three toes enjoyed a decent size and obviously served to help the animal to move.

It is also said that this dinosaur may have been one of the fastest in its time, reaching a total of 48 kilometers per hour. This is equivalent to saying that it ran more than ten meters per second, something that is impressive if we compare it to a human, and it is even more striking considering the large size this animal possessed.

The neck of this curious specimen enjoyed the shape of a letter S, as was the case with other specimens of which we have spoken on previous occasions, the total length of its neck was almost 100 centimetres.

However, this size was only reached by dinosaurs that reached maturity, and as we know, this was not always the case due to the dangers and the hostile environment in which they lived.

In addition to this, this group of animals also had what we know today as fenestra, which were located in the temporal zone of the structure of the individual’s skull, as you surely know, these fenestra were actually depressions or voids that served the function of taking weight off the general region of the skull.

A curious fact is that we know these structures very well because human beings also have them in their skulls, although they receive a different nomenclature.

The fenestra also had the important function of being an insertion point for some muscles, the same thing happened with other organs of great importance for the total functioning of the organism.

The famous crests that we mentioned at the beginning were also formed by a rare bone material, and they were located in the upper zone of the eyeballs, so their aspect was really frightening.

It is also known that the color of these singular crests could have been very striking and even bright, since these structures were of great importance in the courtship process, a process that was fundamental for the animal to find a female and transmit its genes.

The teeth of the Albertosaurus

On the jaw area we can count that exactly six dozens of spaces were found where the teeth were inserted, although not all the dental elements were found exactly.

On this occasion the great Albertosaurus won the competition, since the other tyrannosaurs had no more dental elements, despite the fact that the dimensions of their skulls and jaw regions were much larger.

On these teeth we can also point out that curiously they possessed a totally different shape and design, some of them differed greatly from others, and this happened in such a way that each dental group had a specific function within the hunting and feeding process.

The elements that were located in the jawbone, on the other hand, were designed to be able to withstand the great pressures that would arise when this great dinosaur fought with another animal to capture it and turn it into food.

On the other hand, it has been calculated that the force with which this animal could have made a bite was probably not greater than that of other specimens that turned out to be its direct relatives.

But this does not mean that this bite was not powerful, since it has been demonstrated that even being less powerful, it was enough to exert a terrible pressure on the body of its prey, so much so that it even killed them in a very short time.