The Aragosaurus genus grouped together a series of macronary sauropod sauerkraut dinosaurs.

It is believed to have lived during the Cretaceous Period, a period that took place approximately 136 million years ago.

The name Aragosaurus means’Aragon’s lizard’, making clear reference to the first remains, as they were found in this Spanish province.

It is a genus that is represented by only one species, A. Ischiaticus, which is considered to have inhabited the vast territory we know today as Europe.

Would you like to know more about this fascinating prehistoric reptile? Then don’t forget to read this article where we provide you with a wide and detailed information about the Aragosaurus.

It is important to mention that the Aragosaurus specimens are conceived as Macronaria, however, this is a classification that is not well defined, so it is established that they are sauropods of varied size but unique in their species.

The fossil remains of the Aragosaurus were found in a territory that today is known as a place that belongs to a formation called El Castellar, this formation is located in Spain, specifically in Teruel.

The discovery of this creature, as well as the discovery of other dinosaurs, also reinforces the interesting and curious theory that many millions of years ago all continents were actually one land mass, what scientists call Pangaea.

However, specimens of the Aragosaurus itself have also been found in territories so far away that the Pangea theory for many is already a fact rather than a theory. 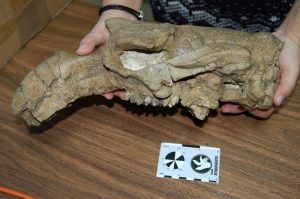 Traces have been found within the American continent and even within the continent, we know today as Africa, if we want to be more specific, in countries such as the United States or countries that today occupy the eastern part of the African continent.

As we have already mentioned, all this strange distribution of the Aragosaurus makes scientists and the whole world think that perhaps these animals were swimmers with divine powers or that Pangea’s theory really is totally true and with many foundations.

This is because it is almost impossible for them to have moved through the water over distances as large as those we have just mentioned.

This seems to indicate that the entire continental mass was united during those truly remote years, a theory that increasingly seeks to be demonstrated and validated by the scientific community.

This specimen really amazed by its size, counting a total of more than 18 meters long and with an extravagant volume that exceeded 20 tons.

It is also said that this specimen enjoyed eating vegetables of almost all kinds, always taking into account the limitation of Cretaceous flora.

This leads us to suppose that it was a purely herbivorous animal that needed a lot of food so that all its structure could be maintained in an optimal state of health, since due to its size its metabolic expenditure was greatly increased.

Its habitat was probably the territories that today belong to the coast of a sea called Tethys, which links it directly with another dark specimen whose official name is Camarasaurus.

The dental structure of this specimen has several elements that have a design similar to the shape of a spatula, perfect design that serves to perform a good extraction of vegetables at a really enviable speed.

On the bony elements known as vertebrae, we can clearly see that they have a robust appearance and even widen to a greater extent precisely in the area known as thorns.

These interesting structures had the function of allowing the tail ligaments to be inserted into the vertebrae.

In addition to this, a quality also seen in other specimens, the enormous Aragosaurus had a series of depressions within the bony elements called cervical vertebrae.

The depressions observed in the cervical vertebrae surely fulfilled the important function of reducing the volume of the entire structure and providing it with a little more agility in movement, a resource that was really necessary at that time.

The mentioned species and the only known one, the Aragosaurus ischiaticus, bears this official denomination due to the characteristic widening of the hip area, a quality that makes it different from other specimens that have turned out to be its direct relatives.

As for the upper extremities, these turned out to be shorter than the other extremities, however, it has finally been shown in recent studies that this difference is not very considerable either, not as much as was thought many years ago, and in addition, this is a characteristic that is also repeated in specimens called as camarasaurids.

In summary, it has been calculated that the size of the bone element known as the femur may not have been larger than 140 centimeters.