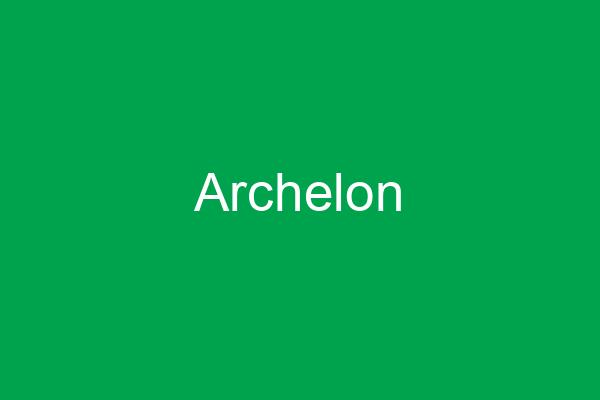 The Archelon ischyros is the only species that has been found in the Archelon genus. It is an impressive species of marine reptiles that once inhabited the planet.

These animals can no longer be found today, as they became extinct a few million years ago, and are so ancient that they came to cohabit with the dinosaurs.

The most characteristic feature of the Archellon is their huge shells. This prehistoric animal has a lot to do with today’s tortoises.

In fact, it is not that it can be compared with the turtles, but it really belongs to the turtle family, even though they were really big in comparison to them.

They are considered the largest sea turtles in history, if you want to discover more about this fascinating extinct animal do not miss the following article with extensive and detailed information about the Archelon.

In the event that new fossils are discovered, the number of species belonging to this genus could increase at any time, and even decrease if the species A. ischyros is finally considered to belong to another genus.

In any case, it is important to mention that from dinosaurioss.com we will be worried about keeping this section updated in view of possible future changes.

The Archelon was undoubtedly a fairly large marine animal, although before starting to talk about this genus it is important to clarify some aspects so as not to generate any confusion.

Although we are carrying out this brief study on the Archangelon in our page on dinosaurs, we must warn that on this occasion it is not a dinosaur, although it is obviously included in the Sauropsida class, to which most reptiles (extinct and contemporary) as well as birds belong.

In this case we are talking about a prehistoric animal, specifically a sea turtle (in fact it belongs to that superfamily) of which we can say that it did come to live with the dinosaurs.

Archelon inhabited the planet Earth approximately 80 million years ago, but through the fossil remains found it has been possible to determine that its length was approximately 4 meters, while the width of its wingspan reached 5 meters from the end of one fin to the end of the other.

It was not an animal that enjoyed a great height but it was around 50 centimeters, although it had a very robust structure, so much so that its weight was over 2 tons, being approximately 2,200 kilograms.

The superfamily: the sea turtles

In order to go deeper into the details of this genus it is convenient to know how the other species belonging to the same order are, that is, the turtles, although as you will see we must be more specific.

Specifically, we refer to the fact that they belong to the superfamily of sea turtles, where Archelon was classified because it adopted most of its characteristics, and we can establish many similarities thanks to the paleontological studies carried out.

Obtaining more information about the order and superfamily of the Archelon will allow us to get to know this genus better, which is why we will now talk about the characteristics and features of sea turtles.

In fact, the superfamily to which Archelon belonged has the scientific name Chelonioidea, but it is commonly known as the sea turtle superfamily and it is important to understand that in biology a superfamily is a classification that groups diverse families with common traits and kinship relationships.

Chelonioidea is actually a very old superfamily that has been evolving over time and that currently still exists due to the descendants of the extinct sea turtles, descendants that have given rise to seven species of sea turtles such as the caguma or the olive ridley among others.

The sea turtles have a fusiform body, since this oval shape reduces the resistance of the water to movements, which is why we observe this shape much more pronounced than in the land or freshwater turtles.

Although it is evident that all those who have been able to see a turtle know that they generally hide their head and limbs inside their shells, the truth is that sea turtles, due to their spindle-shaped body, are not able to hide inside their shells.

The difference between the various genera and species of sea turtles lies in their anatomy and is generally caused by the number and shape of their shell shields or the prefrontal scales on their heads.

All the species belonging to this group have a hard shell except for the leatherback, since in its case we observe a set of bony plates under its tanned skin.

Sea turtles carry out the osmoregulation process, which consists of maintaining a certain internal level of osmotic pressure in order to retain the necessary fluids in the internal environment of their bodies.

Sea turtles are mostly poikilotherms, with the exception of the leatherback. This means that they do not maintain a specific body temperature, unlike other animals such as humans that function with a homeothermic system. In our case, the temperature must be kept constantly close to 36.6 degrees Celsius.

When we talk about the superfamily of sea turtles we must emphasize that the fact that they are poiquilotherms has a clear disadvantage because they cannot specialize in creating totally efficient enzymes at a given temperature.

The enzymes that they do have do not work optimally at any temperature, in fact at some temperatures they continue to work but more inefficiently (state of hibernation) and on other occasions they can consume more energy than necessary.

Sea turtles do not usually dive very deep as they have to surface from time to time to breathe through their lungs, which they can fill in a matter of seconds with a single exhalation and inhalation.

The time they can remain underwater is from 5 to 40 minutes, after which they must return to the surface to take in air and dive again. However, when they sleep they use less energy so they can stay underwater for approximately 5 hours in a row.

Information about the Archelon

Even so, as we will see below when talking a little more and more specifically about the Archelon, this genus presents some peculiarities that clearly differentiate it from any other sea turtle.

One example is its size, since A. Ischyros is considered the largest turtle in history and at the same time one of the oldest to be discovered, which should not surprise us since we all know that reptiles are ancient animals, which is totally true.

The genus Archelon is another example that corroborates that turtles are animals that have been on earth for many millions of years, and if we talk about this particular genus, we must know that it came to cohabit with Elasmosaurs and Mosasaurs in the area of the North American continental sea.

Looking specifically at its peculiarities, what differs in this genus from modern sea turtles is that it does not have a hard shell, finding in this aspect as well as in other quite similar to the leatherback turtle.

To support his bony shell Archelon used an elaborate skeletal structure. Within his unique features we can find that his tail was pointed and that unlike the others, his skull was narrow. The shell it had formed a high vault and had a very pronounced overbite.

Speaking of his shell again, he would not have had a bone. Instead of forming shields, it simply had thick, leathery skin and had osteoderms (bone plates) attached to it. For this same reason, the shell that the Archelion turtle had was really light.

The plastron (ventral bone area of the turtle) it had was much more robust than that of the leatherback turtle and its structure consisted of four star-shaped plates.

In addition to all this, the Archelion had a very hydrodynamic body, with an overall teardrop-shaped anatomy. Its front flippers were really big and powerful, which allowed its large body to move through the water.

In fact it is estimated that it would have been able to swim in the open ocean with its fins, which had no claws.

Unlike most sea turtles that are poiquilotermos, the Archelon resembles the only exception, the leatherback turtle.

Like the leatherback turtle, the Archelion was able to keep its body temperature stable. The body temperatures they had were too high for the temperature of the sea and this posed a challenge for thermal stability, but to achieve this they transformed the heat metabolically, a phenomenon also called endothermia.

Seeing the very pronounced overbite that he had, it follows that he would have had a really strong bite. He would have fed on jellyfish or squid-like molluscs.

How was its discovery?

The first sample found in this genus was specimen YPM 3000. It was discovered in the Pierre Shale Formation in South Dakota. The fossil remains that contain this formation date back 80.5 million years in the past.

All the work of this discovery is in charge of Dr. GR Wieland in 1895 although the first description of this genus was not made by this scientist until one year later, in 1896.

In 1970 the second fossil remains of this genus were found in the same area. This specimen discovered would be much larger than the first, with a length of four meters and about 5 meters wide from one fin to another, data that have been taken into account to make the basic description of species A. Ischyros.

You can find this fossil remains if you visit the Natural History Museum in Vienna.