Half bird and half dinosaur

The Bambiraptor was a genus of small, carnivorous flying dinosaurs that inhabited our planet during the Cretaceous period about 70 million years ago.

This genus has been classified among the group of Saurian dinosaurs, drowned theropods.

The origin of its name can be found in Italian, as it is the combination of the Italian word bambino which translated into our language means child and abductor due to its great kinship with the Velociraptor.

As a general rule, most of the dinosaurs that were carnivores were much smaller in size than those that were herbivores.

A clear example of this is the Bambiraptor, which at just 1 meter long and 30 centimeters was a carnivorous dinosaur.

If this fascinating dinosaur is causing you concern… You should know that below you will find the most complete information about the Bambiraptor on the internet… Stay with us and discover everything about this carnivorous dinosaur from the Cretaceous Sea!

Only one species belonging to the genus, B. feinbergi, has been found.

We must clarify at this point that this genus is represented by the only species found so far, the B. feinbergi, but this information cannot be confused with the fact that there was only one species.

We cannot know this for certain since the discovery of new fossil remains belonging to this genus could indicate the presence of a new species, which is why we will try to keep this section updated.

In September 1993, Wes Linster discovered the fossilized remains of a small theropod in Glacier National Park in Montana, USA.

Wes and his family dug up the skeleton and started dissecting the fossil. They called this discovery Bambi in reference to the small specimen found.

This skeleton is currently on display at the American Museum of Natural History in New York.

This finding was that of a complete skeleton, more than 90% of it and most of the bones in good condition.

Due to its excellent condition, the bones have been assembled with great ease and a certain confidence, which allowed the animal’s posture to be recreated.

In the same place where the remains of the Bambiraptor were found, scattered bones were found that were originally believed to be from other Bambiraptor, but later it was discovered that most of them belonged to other animals, which were larger than the initial holotype. 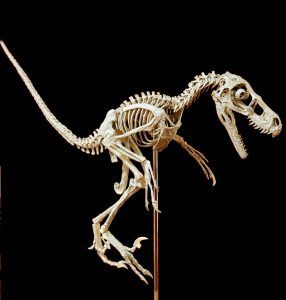 This skeleton would finally be described by David Burnham in 2000. Burnham finally called him Bambiraptor feinberg.

After these findings, no more fossils have been found and because the only complete skeleton found of this dinosaur is from a juvenile, several paleontologists have considered the possibility that the Bambiraptor really is the young version of some genus described above.

It has even been pointed out that Saurornitholestes is its adult form. Even so, many paleontologists maintain that it is an independent genre from any other.

The life of the Bambiraptor on earth

The existence of Bambiraptor on our planet developed approximately 72 million years ago, during the Upper Cretaceous period.

His remains were found in North America, more precisely in a Montana National Park, however, the distribution of this dinosaur may have been very wide, inhabiting the entire northern part of the enormous American continent.

This National Park was characterized in this prehistoric period for being an area of high volcanic activity whose flora was composed of conifers, ferns and horsetails.

It is believed that the climate of the Cretaceous period was seasonal, semi-arid, with rains… This leads to consider that the area experienced dry seasons with high temperatures.

The Bambiraptor, as we have already mentioned, was a carnivorous and very fast animal, which made it very easy to hunt small mammals and some reptiles of the area.

This dinosaur hunted its prey from its claws and bit it with its sharp teeth.

General characteristics of the Bambiraptor

There are still no fossil remains of this specimen in its adult version, however, its size can be estimated from the remains found.

It is believed that in its adult stage this small theropod could reach a height of about 30 centimeters, be 1 meter long and weigh approximately 2 kilograms.

Starting with his skull, this dinosaur had a relatively large brain cavity, which surely helped him to have better agility and intelligence compared to other drowning dinosaurs.

On the other hand, it is believed that this large brain cavity is due to the fact that most animals have larger brain proportions when they are babies than adults.

This calculation does not take into account brain tissue, for example, according to the EQ, any dinosaur with a brain twice as big as another will be smarter.

However, on the other hand,problem solving we have the dinosaur with a small brain that can have a great cognitive capacity in teproblem-solving… Becoming more intelligent than the first, but with less sensitive capacity (smell, vision… etc).

In many of the illustrations about the Bambiraptor, we are going to find it with feathers, without this being confirmed for sure, being only a theory.

Although many of the genre related to the dromaeosaurid family, to which this dinosaur belongs, had feathers, which leads to the conclusion that the Bambiraptor did have them. Some paleontologists point out that he used them as an insulating mechanism against the cold.

Finally, we found that the arms were long and had a bone called a fuse, a bone that helps birds fly.

They had claws in their legs and hands. His hands made it easy for him to manipulate objects, as he had fingers that could close, making it very easy for them to catch their small prey with their hands and put them in his mouth.

On the other hand, it is believed that the shape of his arms helped him climb trees, and some researchers even say that he had a tree-like lifestyle like some of today’s birds.

How did the Bambiraptor behave?

Because of its size, it was a very slippery and fast animal, trying to stay away from problems and large dinosaurs.

However, the latter would have had to face several Cretaceous dinosaurs, such as the Troodon and the Saurornitholestes, which, although not large dinosaurs, did pose a threat to the Bambiraptor.

Some paleontologists even point out that he was able to live in small groups, although this is not fully confirmed.

It was in terms of survival that the idea of an arboreal lifestyle was born, as there were fewer threats there than there were on earth, where it was exposed to numerous dangers and larger predators.

Some curiosities about the Bambiraptor