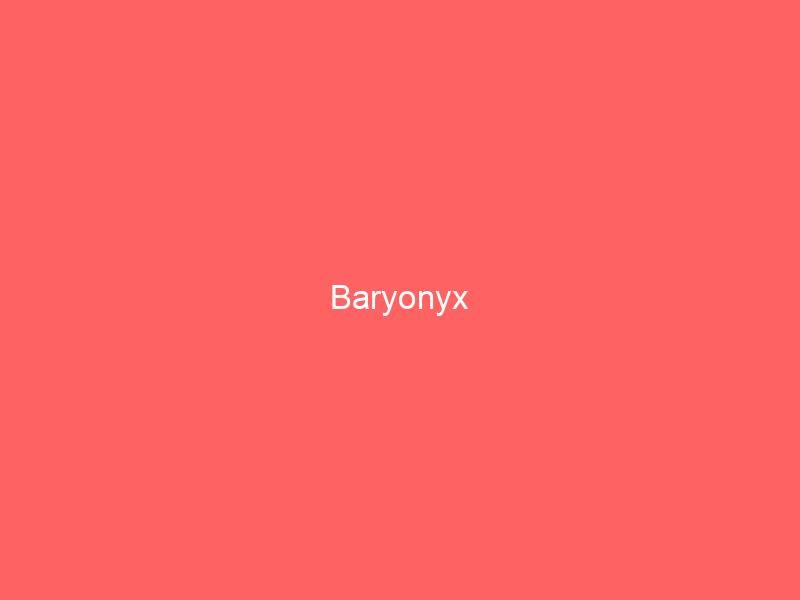 The genus Baryonyx is a genus of theropod spinosaurid saurischian dinsoaurs that lived during the Cretaceous Period, approximately 120 million years ago.

It is believed to have inhabited the European and African continents, mainly in areas near large bodies of water such as rivers and lakes, and some scientists think it may have lived in shallow coastal areas.

The European areas where remains of this theropod fisherman have been found are England (first findings), Portugal and even Spain.

It has been indicated that this dinosaur, like almost all the species within the Spinosauriade family such as the Suchomimus or Spinosaurus, fed on fish, due to a skull very similar to that of a crocodile with conical teeth that kept elusive prey trapped in its jaws.

In addition, the Baryonyx had a large claw on its forelimbs that served as a hook: once it hooked a fish, it could not escape.

Want to find out more about this fascinating dinosaur? Then do not miss the following article where we expose a wide and detailed information about the Baryonyx.

Taxonomy of the Baryonyx

We must clarify at this point that the fact that this genus is currently represented by only one species could change with the discovery of new fossil remains that could evidence a new species within the same genus.

For this reason, we will do our best to keep this section updated in view of any possible changes in the taxonomy of Baryonyx.

This dinosaur, let’s highlight, was very strange, due to the fact that it was an animal that could move only using its two lower extremities, however, when it needed to, it used its front extremities for such a situation, something that is quite rare in these huge specimens.

What stands out about this dinosaur are the two giant claws that it had in its arms, this animal had that characteristic that was also present in other dromeosaurids (but in the hind legs), two elements could measure nothing more and nothing less than 35 centimeters.
On the other hand, a large group of researchers have been able to realize that the bones and their structure show that this animal probably could have had a series of strong and resistant muscles, especially in the extremities, even much stronger than in other theropods that have been studied throughout these years.

As for their neck, we can say that it is a very important area in the life of these dinosaurs, since it determined in great part the way in which they fed and hunted.

In this case we can say that it actually lacked that S shape, this was a detail that differentiates it from many other specimens also theropods, therefore we can say that flexibility was not a quality of this dinosaur.

On its skull we can affirm that it was quite similar to the skull of other extinct animals, because it fitted perfectly in an angle of a few degrees.

By the way, the jaws of this extinct animal were not smaller, and they were quite frightening, similar to the jaws of crocodiles, which many people flee from just by looking at them.

These terrifying jaws had a total of 96 dental elements, a really superior and overwhelming amount compared to other “similar” dinosaurs, even though Baryonyx was truly genuine.

If we do the math, we can see that these 96 tooth elements actually turn out to be almost twice the number of teeth of other dinosaurs.

As for the location of those teeth, the vast majority of them could be found in the lower area, while the remaining ones were obviously in the upper area.

A ridge-shaped protuberance can also be seen, just above the giant theropod muzzle, however, it has not really been proven what it is or what function it had.

To finish commenting details about the snout of this specimen, we will say that it also had a not small depression that was located in the upper area.

According to the experts, in order to prevent the target or food from escaping, while it was fighting for its life, another quality that is also similar in crocodiles.

The discovery of Baryonyx

The famous lake identified or known as Wealden, has the reputation of being quite old and above all quite mysterious, in fact this is where the vestige of the animal protagonist of this article was first found.

It is known that since millions of years ago, precisely since the Cretaceous period, in the “early” layer of that period, this famous water agglomeration was in charge of covering extensive territories that today remain discovered.

These territories are what is now known as the northern zone of the European continent.

We know about our friend, the Baryonyx, because a great amateur was making his endless “expeditions” near this water agglomeration, and it was to be expected that his efforts would have some kind of result.

This was the case and after some time he managed to find the whereabouts of a series of remains that belong to this large specimen.

The amateur we mentioned was identified as William Walker, for that reason we now identify this animal as the Baryonyx walkeri.

It all started when this subject noticed that a large claw was notoriously visible in an old clay pit, this caused Walker to ask for help from his companions so that they could remove the remains of the huge specimen in a short period of time, to the surprise of all of them, the bones of this animal were in an optimal state of conservation.
After some time, the news soon reached the authorities and for that reason the scientists Milner and Charig took charge of the exploration and from there they carried out a careful excavation that would avoid the other remains to suffer collateral damage.

These scientists arrived directly from a museum located in the city of London (England), and after carrying out their work, they took the decision of publishing a review of the specimen in 1986.

Obviously, they did it without forgetting to mention that the person who managed to find the remains was Walker himself. This is the explanation of the name of this extinct animal, as we had already mentioned.