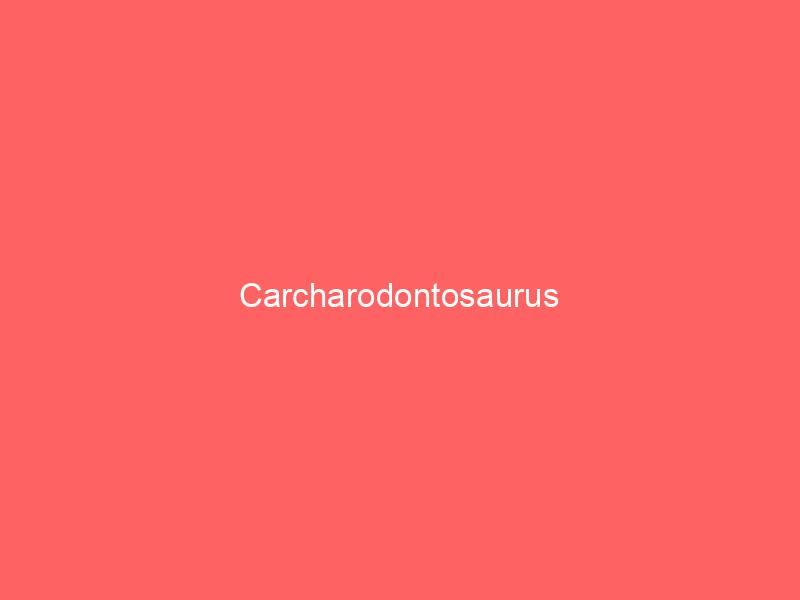 The genus Carcharodontosaurus was a genus of allosaurid theropod dinosaurs that lived on Earth approximately 112 million years ago, during the Cretaceous Period.

It coincided in time with species known as the Spinosaurus, from which remains have been obtained indicating that there was fighting between these two species.

The name Carcharodontosaurus means “shark tooth reptile”, and as the name itself indicates, the teeth it possessed were very sharp and curved, perfect for quick cuts with little bite pressure.

Would you like to know more about this disturbing dinosaur from the Cretaceous? Then do not miss the article below, where you can get all the information about the Carcharodontosaurus.

To complete the biological taxonomy of this dinosaur it is necessary to mention that the genus Carcharodontosaurus is represented by two different species: C. saharicus and C. iguidensis.

However, this information could change at any time if new fossil remains belonging to the same subfamily are found but with enough differences to demonstrate a new species.

This animal turned out to have a large size that can be related to the fact that it had a diet based purely on meat consumption.

Its length was almost 13 meters and its weight could have been more than 15 tons, this is why it is known as one of the largest theropods that have been discovered and detailed scientifically.

The skull of this animal did not go unnoticed either, as it was also of a size according to the general dimensions, though the huge head of this dinosaur managed to stand out a lot in the general structure.

We are talking about a cranial cavity with a length of almost 160 centimeters, a size that was quite similar to that of one of its direct relatives, the famous dinosaur known as Giganotosaurus.

It should be clarified that at the beginning it was almost certainly thought that the true length of this element was more than 180 centimeters, but after a while many realized the error in the measurement and had to subtract almost two tens of centimeters in order to show the correct length.

On the jaws of this specimen we can say that they were full of dental elements that enjoyed the shape of a saw, that is why these dental elements have come to be compared with the teeth of sharks, a contemporary animal that we know well.

In fact, as we mentioned in the introduction, the name Carcharodontosaurus refers to the similarity between the teeth of both animals.

These teeth were very powerful, strong and above all prepared to be able to tear off as much flesh as possible.

This makes it very likely that due to these powerful teeth, the victims that were captured by this dinosaur lost too much blood to continue living, so this turned out to be an extremely lethal animal when it was preparing to hunt.

In addition, in the structure we know as hands, this specimen had a series of claws that were so well sharpened that they could cut very quickly any material, especially the hard flesh of their victims.

These claws together with the teeth were the perfect tools to have an excellent day of hunting, few were the victims that probably would have escaped the attack of this huge and ruthless specimen.

On the other hand, these specimens enjoyed a two-dimensional vision, which is why they turned out to be a truly deadly and effective hunter, although their great reputation as a predator is also due to other structures.

One of these structures was the hind limbs he possessed, which were provided with too strong and powerful muscles, as well as a considerable length, which was quite typical in the famous specimens known as Carnosaurs.

If we focus again on the jaw area, we will quickly realize that it was not so powerful, at least not in comparison with other huge specimens such as the dreaded Tyrannosaurus rex and another individual that we have already mentioned in this section, the Giganotosaurus.

However, we can say that it was much more powerful than the Spinosaurus, a specimen also very interesting to study.

A characteristic that resembled the Carcharodontosaurus with the crocodiles that we have come to know today, is that the brain was probably located in the endocranial region.

On the other hand, its inner ear presented an anatomy almost identical to that of the contemporary animal we have mentioned.

In the same area we can observe the telencephalon, which turns out to be of a more considerable size in comparison with the reptiles of our days, in spite of this, this element is of a smaller dimension than in the birds of today.

All the characteristics that we have mentioned before were necessary to reach speeds that are really impossible for a human to reach, we are talking about running at more than 30 kilometers per hour.

Such a figure is equivalent to saying that for every second they could cross almost 9 meters, but these are calculations that have not been demonstrated in a reliable way, so we strongly recommend taking these data only as a point of reference.

We warn you about this because there are also arguments from other groups of scientists who claim that if this animal managed to reach this kind of speed, a simple fall due to a calculation error could have cost it its life.

In the case of a fall, he might have needed strong arms to cushion the impact of the fall, but this animal did not have precisely this type of front limbs, in fact these were rather smaller and much less powerful than the hind limbs.

That is why a singular fall while this animal was running at these great speeds would have done a lot of damage, and if he had not lost his life, at least he would have been seriously injured.

This would make it impossible for him to carry out future activities necessary for living in his territory, which is why when we speak of his maximum speed we are referring only to one theory, which may or may not be true.