The dinosaur that hunted without teeth

The genus Chirsotenotes includes a number of species of Saurian dinosaurs, saurisch theropods and oviraptorids that lived on the planet approximately 70 million years ago.

This stage is known as the Cretaceous Period, and this group of extinct animals inhabited the area we now know as North America.

As for their extremities, the forelegs were longer than those of their Asian relatives, while the hind legs appear to have been stronger.

It is possible that this genus, Chirostenotes, was formed by stronger species than the Asian ones, very similar to the current cassowaries.

The dimensions of this animal reached 3 meters in length and 50 kilograms in weight. Although it seemed smaller than the Asians, its strength could have been greater.

Want to find out more about this dinosaur? Then be sure to read this article where we show you all the information about the Chirostenotes.

It is important to mention at this point that this genus is represented by a single species, C. pergracilis, which is the standard species on the basis of which all scientific descriptions have been made.

However, this classification could change if new fossil remains of the same genus are found but with sufficient evidence to be considered a different species.

This is a specimen whose remains were found in a formation identified under the name of Dinosaur Park.

It is a famous formation located in the region of Alberta that for many years has provided great contributions to the world of science, especially in the field of paleontology.

Despite the important finding, the name and laborious classification of this dinosaur, it is not something that has been easy to do.

This is because scientists to this day present certain confusions and controversies that are very difficult to clarify or resolve.

The official name of this animal was given in the year of its incredible discovery, remember that at that time only had bones from the hands of the specimen, and it should be noted that this happened just under a century ago, in 1924.

After many years of hard work and efforts in exploration and research, the bones of the legs of the Chirostenotes were finally found, precisely eight years after the “first contact” with the initial vestiges. 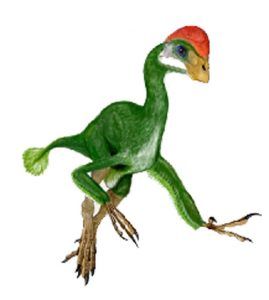 At that time a group of prestigious scientists had the audacity to give it a new official name, which is remembered as Macrophalangia, whose significance is nothing less than “long fingers”. This term is now considered synonymous.

From that moment on, the scientific community realized the countless mistakes they were making in naming or naming these extinct specimens, so they tried at least to be more careful in every exploration, study, or description.

It was then that this animal was described as a dinosaur that based its diet on the meat of other animals of its time.

This conclusion was finally correct and proven over the years, but now the doubt arose from the fact that this animal was classified as the same species or as a completely different species from the one they had previously thought.

It is important to mention that even today several remains found have not been correctly assigned to any particular species.

The name Chirostenotes comes from ancient Greek and literally means “with narrow hands“, referring to its long upper extremities that ended with strong claws but also with thin fingers.

Another important aspect that should be mentioned about this dinosaur is that it had a crest and a beak and that finally the teeth found did not correspond with the other fossil remains, so it was determined that Chirostenotes did not have teeth.

The length of these dinosaurs was approximately 2.85 meters long and from the ground to the hip they reached a length of 90 centimeters, weighing approximately 50 kilograms.

As for its jaws, this is an important part of the structure of the extinct animal, we can say that traces of them were found and immediately it was given the name of Caenagnathus.

This official name is what today is the name of the family that contains the dinosaur that is the protagonist of this text.

As a result, many experts mistakenly thought it was actually a prehistoric bird, but they soon reconsidered and corrected their mistake without any delay.

Soon another group of prestigious researchers noticed some remains that had been extracted just a year before the discovery of this animal, which seemed quite strange to them since these bones had not yet been studied or reviewed.

However, they took the license to do it anyway, making a series of important advances to get to know this animal a little better.

This all happened just two years before the 1990s, which ultimately benefited the research of several paleontologists in general because it helped to clarify doubts and link specimens within the same species.