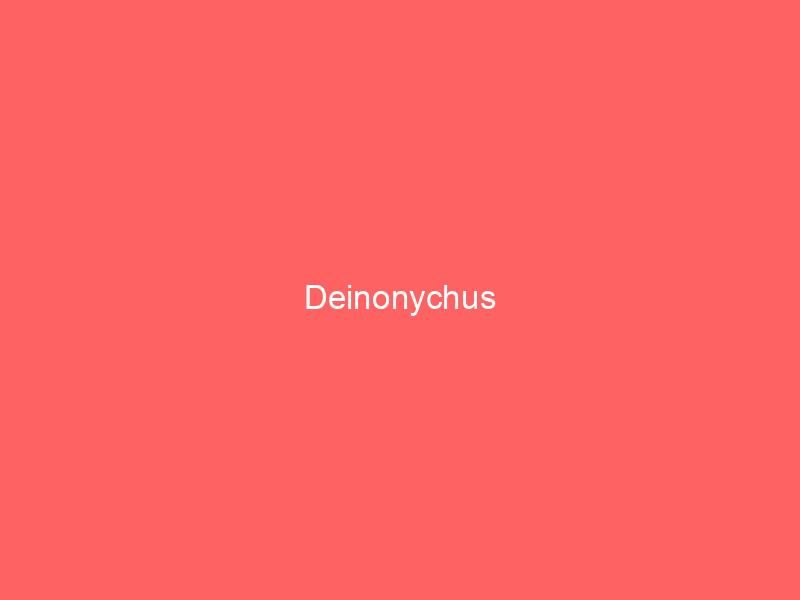 It is one of the best known dromeosaurids, but not the largest (that position is taken away by Utahraptor), yet the species Deinonychus antirrhopus reached 4 meters in length and exceeded 1.5 meters in height.

As with all dromeosaurids, it possessed a sickle-shaped claw characteristic of the family with which it was easy to stab its victims.

Remains of this dromeosaurid have been found with feathers, suggesting that it was a feathered dinosaur but that due to its size and the structure of these feathers it could not have flown.

However, it could have used such feathers not only for thermoregulation (which is thought to have been its initial function) but also to have controlled the race better and been more aerodynamic, similar to an actual ostrich, but much more dangerous.

Do you want to find out everything about this Cretaceous dinosaur? Then do not hesitate to read this article where we expose you a wide and detailed information about the Deinonychus.

It is necessary to mention in this section that this genus is represented by only one species, D. antirrhopus, being this the species on the basis of which all the scientific description we can currently count on has been made.

However, this does not mean that only one species existed, the discovery of new fossil remains belonging to this genus but with enough differences could be considered as a new species.

That is why from this platform we are committed to do everything possible to keep the biological taxonomy of this dinosaur updated.

The fossil remains that were found were located within the enormous territory of the United States, and it is very interesting because these remains were not only found in one state but in several, such as the state of Oklahoma or Wyoming, already known for this type of discovery.

The famous and peculiar formation in which these remains were found was the so-called Cloverly Formation, although other remains have been found in the Cedar Mountain and Antlers formations.

In addition to all this, a group of dental elements have also been found that we still do not know to which genus they belong in a reliable way.

However, it has been presumed or assumed that there is a high probability that this new finding belongs to the creature that is now the protagonist of our article, the Deinonychus, these remains were found in a state until now unpublished for this animal, in Maryland.

The word Deinonychus turns out to be strange, and this because it turns out to be a word in the Greek language, so if we prepare to translate that word into our language, the meaning would be something like “terrible claw”.

The discovery of this claw was a fact that really came to mark a before and after in the study of this huge animal, was the realization of scientific research by a famous paleontologist, John Ostrom, in the 1960s.

Due to this work, this subject was in charge of providing a new perspective based on the numerous pieces of evidence that had been collected so far thanks to the fruit of several findings over many years.

This perspective practically changed the way in which the science of Paleontology saw the dinosaurs, it can be said then that it came to revolutionize this part of history and science.

Thanks to this, it can be said today that this same scientific research led to a kind of rebirth of these prehistoric animals, and even events that were not previously in question began to be debated.

It was due to the important and interesting questions that this scientist had issued when an advance in paleontological knowledge was produced not only of this genus of dinosaur, but in general of all these huge lizards that inhabited our planet.

One of those facts that were considered proven was that dinosaurs were cold-blooded, but the peculiar John Ostrom was in charge of showing that there was not enough evidence to be able to affirm such a thing, so we should not rush to provide data of this kind when the same scientists have not reached a consensus.

The same was true of other kinds of facts and knowledge that were hitherto thought to be no longer a matter of debate, knowledge that was taken for granted and never questioned but is now again at the centre of controversy.

Let us also remember that at that time the scientific world in the field of paleontology thought that dinosaurs turned out to be without exception a group of large animals that travelled through their territory very slowly due to their characteristics.

However, Ostrom was in charge of demonstrating that the magnitude of the size of dinosaurs did not necessarily have to be considerable, he was in charge of informing the world that there had also been smaller dinosaurs, with different body posture and bone structure, in addition to other important characteristics.

In short, this was a study that marked a new era in the history of dinosaurs, or at least in the way these interesting and mysterious specimens have come to be studied and analyzed.

As we mentioned, its name means something like “terrible claw”, and all this because precisely this animal had a large claw with the shape or design of a “sickle”, this peculiar claw was also located in the two hind limbs, specifically in the second finger.

In addition, it has been observed that this dinosaur has an element known as nail, which also has a large size compared to other creatures of his time, which is a structure of holding nails or claws.

Ostrom also had the idea of conducting an analytical study of various birds of our time and various reptiles, especially we refer to crocodiles.

Thanks to these studies he was able to realize the great similarity of the claw of the Deinonychus with the claws of the contemporary birds that we have just mentioned, reinforcing even more the theory that these birds come from the dinosaurs.

It is said that this dinosaur’s claw could have reached a length of more than 120 millimeters, which was more than enough to cause serious damage to any opponent or victim that was in its path.

On the other hand, the type species, the one that receives the famous official denomination of D.antirrhopus, presents a series of strange qualities in the zone of the tail, is for that reason that this denomination was placed to him, referring to the counterweight that this zone of the tail caused in the animal, since this was the main function of this structure.