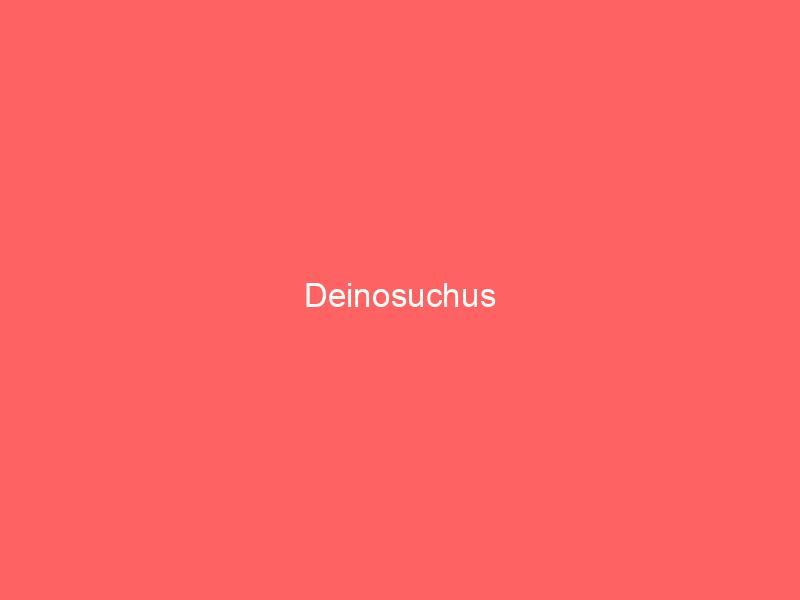 The genus Deinosuchus groups a number of sauropodilian diypsids of the order Crocodilia that lived during the Cretaceous Period about 80 million years ago.

Its name means “terrible crocodile”, and it was 15 meters long and weighed more than 9 tons, making it one of the largest crocodiles that ever existed on Earth.

These dimensions are capable of making the largest of today’s crocodiles small, and only surpassed in size by the Purusaurus.

Deinosuchus lived in present-day North America, and it appears that he could have shared territory with Tyrannosaurus rex, which he would not have feared and would have confronted directly.

Apart from the T.rex, this crocodile could have hunted almost any thirsty dinosaur that would come to a shore to drink a little and not warn the lurking Deinosuchus from the depths.

Do you want to find out more about this extinct and ferocious Cretaceous reptile? Then do not hesitate to read this article where we show you a wide and detailed information about the Deinosuchus.

Taxonomy of the Deinosuchus

The type species, on the basis of which all the scientific description we have at present was made, is called D. rugosus, although it is estimated that another species existed within the same genus, called D. riograndesis.

Discovery and history of this prehistoric reptile

It was precisely in 1858 when a scientist, Ebenezer Emmons, who also enjoys being a successful geologist, managed to make the review of two large dental elements, which were totally fossilized.

These fossil remains were found in Bladen County, in the northern part of the American continent, precisely in the state of North Carolina.

Due to this review made by this great investigator, these dental elements were assigned to a specimen officially known as Polyptychodon, because it was thought that this animal was in fact a Crocodile reptile.

After some time, a series of discoveries were made which revealed the mistake that had been made in assigning the Polyptychodon within the group of Crocodile reptiles, when in fact it should be placed within the pliosaurids, a group of marine animals that were also reptiles.

These dental elements that were found by the geologist, were in fact of a coarse texture, and presented a series of curves in their design, besides that they were totally covered with a material known as enamel.

However, it was after some time that these dental elements were finally assigned to the crocodile which is the subject of this article, after many mistakes and errors.

Another tooth could also be found in a county known under the name of Sampson, a county that was also close to the place of the first discovery, but this time it would be Edward Drinker Cope himself who was in charge of giving it its official name, in the year 1869.

After more than thirty years, a group of fossil remains began to be found in a place known as Willon Creek, in the famous city of Montana. These remains were actually osteoderms, and their discoverers were John Bell Hatcher and Stanton.

After that, the same scientists were in charge of the study and later analysis of these remains found, so they ended up assigning these remains to a specimen known as Euoplocephalus, one of the specimens that was placed within the group of the ankylosaurids.

However, as the excavations continued, more fossil elements were found, and it was Utterback who directed the entire operation.

Thanks to these excavations, they were able to find more remains that could be analyzed later, and due to these subsequent studies it was possible to demonstrate in a reliable manner that the remains did not belong to any type of dinosaur.

The scientists then came to the conclusion that in fact these remains should be assigned to a Crocodile reptile, proving that the scientists mentioned above were very wrong.

Based on this new discovery and the new data thrown up by the studies, the person in charge of the excavations thought that it was another animal that was not of their interest, so they decided to abandon the operation.

However, it was a colleague of Hatcher’s, Holland, who resumed the work of studying and investigating everything related to the remains found, and was in charge of making the respective description, always taking care not to make a mistake when assigning these fossils within a certain species.

Thanks to this, these remains could be placed within the Deinosuchus genus, although curiously their discoverer affirmed that initially he had no interest in this specimen, all this was carried out in 1909.

One structure that could be found was that of an incomplete skull, which fortunately could be reconstructed successfully and that is why it is currently on display to the public in one of the most important museums in the United States, the famous Museum of Natural History.

Reconstructed remains have been found there for more than 50 years, and it is presumed that this museum contains the best fossil record of today’s protagonist.

We must clarify that the dark parts that we can see in the fossil elements are the legitimate vestiges, while the areas that we see that have a light color, are the areas that have been reconstructed and in which the material known as plaster has been used for this purpose.