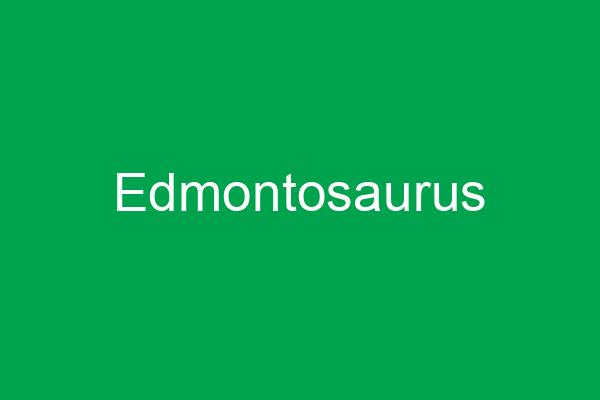 Today we will talk about a somewhat unusual looking ornithopod, we could say very similar to a duck. A lot of fossil evidence has been found about it, so there’s a lot of information to know.

Come with me to discover and learn all about Edmontosaurus.

What does the name Edmontosaurus mean?

The meaning is “Duck Lizard”, a name that was attributed to it because of its particular beak, very similar to that of ducks.

The history and classification of this dinosaur is somewhat complex.

The first remains were found in the 19th century in the paleontological era known as the “war of the bones”.

To be exact the first fossil remains described and named were by Edward Drinker Cope in 1871, but he named them as a species of the Trachodon.

It was not until 1917 that the name Edmontosaurus was first established when the Canadian paleontologist Lawrence Lambe, who at that time named two partially preserved individuals recovered from the Edmonton Formation, named them Edmontosaurus regalis.

Later, at the end of the 20th century, with more scientific bases and tools, the understanding of dinosaurs and consequently of hadrosaurs was greater.

The studies of Michael K Brett-Surman were transcendental in this; since he was examining the fossils of Anatosaurus as part of his graduate studies.

Brett-Surman concluded that all of the Anatosaurus species with the exception of A. copei and A. longiceps actually belonged to the earlier Edmontosaurus genus, although as a different species from the E. regalis type.

This assertion was well received by the paleontological community and had a lot of support. Anatosaurus , A. annectens (originally Claosaurus annectens ), was used to create Edmontosaurus annectens , and all others except A. copei and A. longiceps were additionally assigned to species.

There are two established species of Edmontosaurus , the type E. regalis and the later called E. annectens .

Analysis of known fossils and their locations show that both species lived in the same locations, but at different times, with E. regalis being recognized as a unique species of the Campanian era, and E. annectens being a later species of the Maastrichtian era.

This indicates that E. annectens replaced E. regalis as the dominant species of Edmontosaurus.

When did he live?

Edmontosaurus was a herbivore, a plant eater.

This was proven since fossilized conifer needles were found in Edmontosaurus’ stomach.

So it can be suggested that its diet was generally based on conifers, twigs, seeds and other plants.

It had no teeth in its beak, but it had hundreds of teeth that helped it grind up the hardest plant material.

Edmontosaurus is a large, hornless Hadrosaurid.

The length of the skull of adult individuals is more than one meter. With an estimated total length of up to 13 meters and a weight of up to 4 tons, Edmontosaurus was one of the largest representatives of the Hadrosaurs.

It was a relatively small dinosaur with the same mass as an elephant.

Each hand and foot had four fingers, somewhat similar to the Iguanodon but with a flatter duck-like beak. Its mouth contained hundreds of tiny, tightly clenched teeth.

The skin above the muzzle was “inflatable”, but it usually hung in wrinkles over the nasal cavities.

The skull of Edmontosaurus has an elongated part at the front end of the snout, typically hadrosaurian, in the shape of a widened duck beak.

Apart from its size, in terms of the skeleton it does not differ significantly from that of other hadrosaurs or iguanodontidae.

For example, the forelimbs are shorter than the hind limbs and the three (weight-bearing) fingers or toes of the limbs end in hoof-like claws.

The Edmontosaurus, like many other duck-billed dinosaurs were originally thought to be aquatic life because of the supposed webbed fingers.

Later it was discovered that this skin of the fingers was a deflated filling like that of modern mammals.

The tail would have been too stiff for an aquatic animal and the teeth were built to handle plants that were stronger than those found in water.

It walked on all fours, but could have stood on two legs to go faster.

Because it had no armor or natural weapons it would need to run away in dangerous situations. He may have grouped with slow-moving herds for protection.

The inflatable skin flap over the nasal cavities could have been used to create a resonance in the vocal sounds.

Paleontologists have a good idea of what it ate because of an excellent finding of fossilized seeds, fruit, twigs and pine needles in the stomach of an Edmontosaurus.

As with most ornithopods, a predominantly four-legged (quadrupedal) locomotion is assumed for the Edmontosaurus.

Two-legged locomotion (Bipedal) was probably used only when it was under threat.

The main predators of Edmontosaurus were the large Tyrannosaurs: Albertosaurus and Tyrannosaurus.