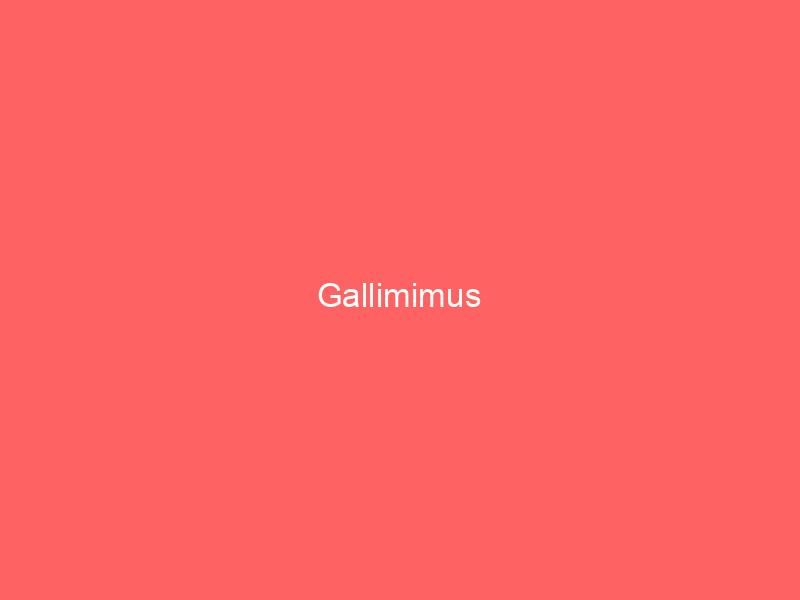 Gallimus bullatus is the only species of the genus Gallimimus found so far.

It is a saurischian theropod ornithopod dinosaur, that is, a group of theropods that looked very much like birds but some of the fundamental habits of their life such as feeding are unknown because they were very peculiar.

This species lived approximately 70 million years ago, in the Cretaceous Period.

The most distinctive feature of the Gallimimus is undoubtedly the long swan-shaped neck they possessed. In fact, if we were to compare this animal with one from our time, we would undoubtedly find a great resemblance in today’s ostriches.

The taxonomy of the Gallimimus

Within the genus Gallimimus we will only find one species, Gallimimus bullatus.

In any case, the number of species classified within the genus is susceptible to possible variations, because at any time a new species of this genus could be discovered, or directly classified within another genus, as has already happened with other dinosaurs, such as the brontosaurus.

Description of the Gallimimus

The Gallimus coincide perfectly with the general features of the genus ornitomimosaurus, which we will describe to you previously to give you a better idea.

Their group: the ornithomimosaurs

As we have already mentioned, the Gallimimus belongs to the genus classified within the group of the ornithomimosaurs, which includes several families of dinosaurs that have several genera within it.

The group of the ornithomimosaurs is frequently known as the ostrich dinosaur group. The first specimens of this group appeared for the first time in the Early Cretaceous and were on our planet during the entire Cretaceous, from its beginning to its end.

And the general characteristics of this group are:

Characteristics of the Gallimimus

The Gallimus bullatus is certainly a rather fascinating dinosaur. And that is because among other qualities this animal bears a very great resemblance to ostriches. Probably if you saw it all of a sudden and didn’t know what animal it was, the first thing you would say would be that you saw a kind of giant ostrich.

That’s where the nickname “ostrich dinosaur” comes from, which we are referring to at some point in the text.
And no wonder, considering what we have just told you and which matches its description: a small head, with big eyes, a toothless beak, a long neck, relatively short front legs and a long tail and hind legs.

However, despite this resemblance to ostriches, you should not forget that this is a dinosaur that inhabited the planet a few million years ago.

Besides, we can tell you about it that it was about 6 meters long and 2 meters high, and weighed between 500 and 600 kilos.

The Gallimimus’ hand is shorter than the length of the humerus.

The length of the tail functions as a counterweight to the rest of the body, as is the case with long-necked sauropod herbivores such as Diplodocus.

Another feature of this dinosaur is that they had their eyes on the sides, that is, they did not have binocular vision. This feature would have helped them to visualize predators earlier and have more reaction time to escape from them.

The beak was formed by keratin and had vertical grooves protruding from the upper jaw. This beak was part of a slightly more elongated skull than the rest of the ornithomimosaurus, being this another differentiating feature within the dinosaurs that make up this group.

The bones of this ostrich dinosaur resemble those of most theropods and especially of modern birds, and that is because their bones were hollow. Even so, it was a relatively robust animal, with a strong iliac bone, a sturdy tail and long limbs, as we have already told.

And to finish with the presentation of how the Gallimus was, we confirm that it was a fast dinosaur. We say “confirm” because we assume that you were imagining it after the description we gave you of it. And yes, it was, it’s believed that this dinosaur could reach up to 60km/h.

How was its discovery?

In 1963, the first samples of this dinosaur genus were found. The credit for this discovery went to Professor Zofia Kielan-Jaworowska, who found these remains in Tsagan Khunsu on an expedition of Poles and Mongolians. Although the discovery was not reported until 1965.

The discovery they made was classified as the IGM 100/11 holotype and they were incomplete remains. The holotype consisted of a skull and a lower jaw.

Other incomplete remains of the same genus have also been found, from which more information about the dinosaur could be extracted.

The appointment does not happen until a few years later, in the year 1972. Paleontologists Halszka Osmólska, Rinchen Barsbold and Ewa Roniewicz were responsible for naming and describing the genus.

Today there is only one species, Gallimimus bullatus, as mentioned above.

The meaning of the name comes from the Latin. The word gallus means “chicken or hen” and mimus “imitate”. Therefore, it could be translated as “imitators of chickens or imitators of hens” (depending on whether one name is used or not).

The name is given among other reasons because the neural arches they have in the vertebrae are very similar to those of modern chickens.

The name also comes from the fact that the lower part of the skull has a kind of capsule-shaped swelling, which resembles a kind of magic capsule used by the Romans around the neck.

When and where did these ostrich dinosaurs live?

These ostrich dinosaurs are among the most recent dinosaurs that have inhabited the earth.

However, it is about 70 million years that separate us from them. Considering that we as a human race have “only” been on earth for 200,000 years, 70 million years are really long in comparison.

And the area in which it would have inhabited would be the one corresponding to the current Mongolia, in Asia; place in which the remains have been found and according to the records that we have of that area during the Cretaceous period indicate that it would have been a place with a high presence of streams, channels, rivers and shallow lakes.

What is not known is what their way of life was like, that is to say, if they lived in groups and if these were very numerous in terms of the number of individuals in the group, if they had a leader, what the eggs they laid were like, if they were oval or round, their size, the number in each clutch… These are, for example, some of the unknowns to which an answer is currently being sought.

What did the Gallimimus feed on?

There has been and continues to be much controversy regarding the feeding of this genus of dinosaurs.

Those who first described these dinosaurs classified them as carnivorous animals, feeding on small animals.

However, if we look at the other dinosaurs in their group of ornithomimosaurus we find that most of them had gastrotropods in their throats, giving away their herbivorous nature.

Animals that have gastrotrotrocytes in their throats are animals that cannot crush food by themselves, but have to ingest small stones that help them crush the food; and this characteristic is exclusive to herbivorous animals.

However, no evidence of gastrotrocytes has been found in the dinosaur we are describing. Although the fact that it fed on vegetables is one of the most accepted theories.

In addition, another detail that makes us think that it could be an herbivore is that the beak of this dinosaur is very similar to that of ducks, whose food is based on foraminifera, plants or mollusks. Besides, the geographical location where these ostrich dinosaurs have been found favored an herbivorous diet.

But there is also a third hypothesis, apparently even more supported than the one that it was herbivorous, and that is that it was omnivorous, feeding on plants and small animals and insects, as well as eggs from other dinosaurs which it would unearth with its sharp and long claws.

As you can see there are still some unknowns to be answered, but taking into account that it is a species discovered relatively recently, we trust that little by little they will be able to answer all those doubts that arise.