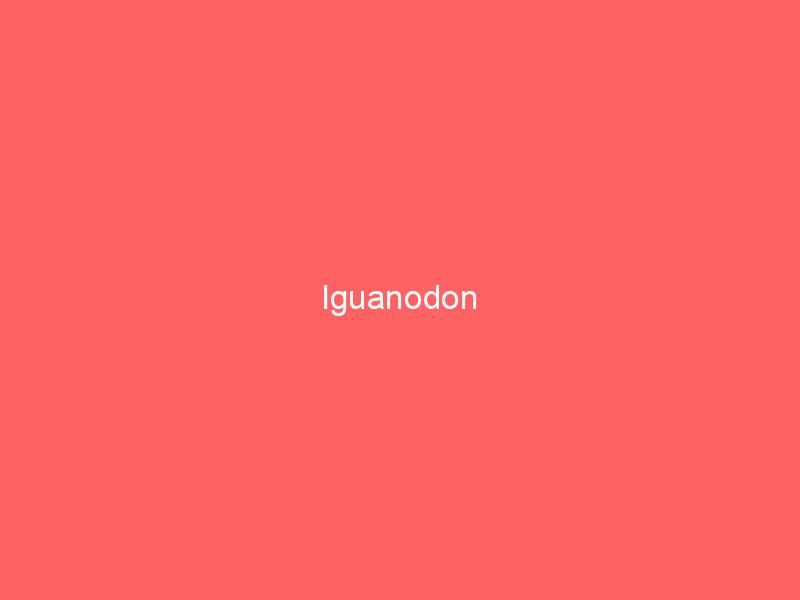 The Iguanodon was a genus of dinosaur that inhabited during what we know as the Cretaceous period (about 125 million years ago).

This genus was classified within the group of the iguanodon dinosaurs.

The main and most distinctive feature of the Iguanodon was undoubtedly the difference in size between its front and hind limbs and the possibility it had of walking with both four and two limbs.

Want more information about the Iguanodon? Then stay and find out all about this herbivorous dinosaur from the Cretaceous!

The taxonomy of the Iguanodon

Within the Genus Iguanadon there are several classified species, which are I. bernissartensis, I. galvensis and I. ottingeri

Although it should be specified here that since the beginning of the 21st century only one species is recognized, the I. bernissartensis.

Basic information about the Iguanodon

The Iguanodon was a fascinating herbivorous dinosaur.

Description of the Iguanodon

The Iguanodon was one of the first dinosaurs to be classified as such. This dinosaur along with Megalosaurus and Hylaeosaurus served as the basis for describing and naming Dinosauria.

It is one of the most fossilized dinosaurs that have been discovered in different parts of the world including two large bone cemeteries.

The dimensions of this dinosaur are really fascinating. It would have been about ten metres long and about two and a half metres high. The weight of this giant varies between three and five tonnes, depending on how big it was.

The most striking feature of the Iguanodon was undoubtedly its ability to change position. They could easily change from a quadruped position to a bipedal position as needed.

This quality would have served them for example to reach vegetation at different heights, have the upper limbs to break the fruit, etc.

The upper limbs were notably shorter than the hind limbs and were equipped with robust hands with five fingers, where the three central fingers were similar and above all robust, as they carried most of the weight.

However, it should be noted that the smaller finger (the little finger, so you can understand what I am referring to) would have been much more flexible and capable of manipulating objects. And finally, the hallux finger (in this case the thumb) would have been the most characteristic finger, as it was situated perpendicular to the other four fingers and protruded in the shape of a conical beak or claw.

The skulls of these specimens were large and high and the striking thing here is that they had long snouts that lacked teeth, although they were equipped with beaks possibly covered with keratin.

On the other hand, the jaws would have had teeth and in fact if we had to compare them they would remind us of the iguana’s teeth, but obviously bigger ?

It also had a very robust spine and tail that helped it support the weight of its entire body in whatever position it was in.

How was your discovery?

The first samples of this dinosaur were discovered in 1822. The credit for the discovery goes to geologist Gideon Mantell, who found some teeth in the Whitemans Green quarry located in Tilgate Forest (Cuckfield, England).

Mr. Mantell, convinced of his discovery, presents them to the Royal Society of London, where several members including the well-known William Buckland discarded the remains and considered them as fish or rhinoceros teeth.

Frustrated, he tried again in 1823, showing the same remains to the French naturalist Georges Cuvier, but he also considered them as the teeth of a rhinoceros.

The fact that he was mistaken for a rhinoceros is due to the fact that on top of the beak they have an undeveloped horn that could easily be confused with one of the rhinoceros species.
Finally, a year later, in 1824, Georges Cuvier retracted his statement and confirmed that the fossils were some kind of reptile or giant animal, although this would have been a herbivore in any case.

And the fact that someone as popular at the time as Dr. Cuvier was said to have done so was clearly accepted by all the scientists of the time.

So, without further ado, it was believed without a doubt that those remains corresponded to some kind of herbivorous animal or reptile, which curiously were similar to the teeth of an iguana. But at no point was it thought that it could be a dinosaur.

It was not until 1878 when many more remains of this dinosaur were found and when its existence was finally made known. By the way, the discovery took place in a coal mine located in Bernissart (Belgium).

The miners Jules Creteur and Alphonse Blanchard found the remains at a depth of 322 meters, who, not understanding fossils, considered that it was petrified wood.
This discovery was undoubtedly one of the largest of this dinosaur, since no less than 38 remains of adult Iguanodon were found.

The name Iguanodon comes from the great dental resemblance to iguanas.
If we break down the name we see that Iguan refers to iguanas, while odon is a Greek word that translated into English means teeth. The full meaning of its name would be “iguana teeth”.

When and where did the Iguanodon live?

To be more specific about the length of time this dinosaur lived, we would have to mention that it inhabited about 125 million years ago.

It is deduced that this animal would have inhabited almost the entire territory, including the areas that are now known as Europe, North America, and Asia.

This is proved by the remains found in all these places and it is even believed that it could have come to live in Africa.

The records from Europe are specifically in Belgium, while the remains found in Asia correspond to Mongolia and those from North America would have been found in Utah.

What did the Iguanodon feed on?

It was an herbivorous dinosaur, with some teeth, or rather, teeth, with a rounded shape, which are also known as spoon or spatula shaped teeth.

It is estimated that it fed on twigs, leaves and shoots that it would cut with its beak and chew with its powerful and enormous teeth.

At the same time it is also assumed that with the claw of his thumb he could have broken fruits and/or seeds to be able to eat them more easily.

According to David Noman the Iguanodon’s diet would have been based on conifers, echisetuses, cycads and even some kind of flowering plants.