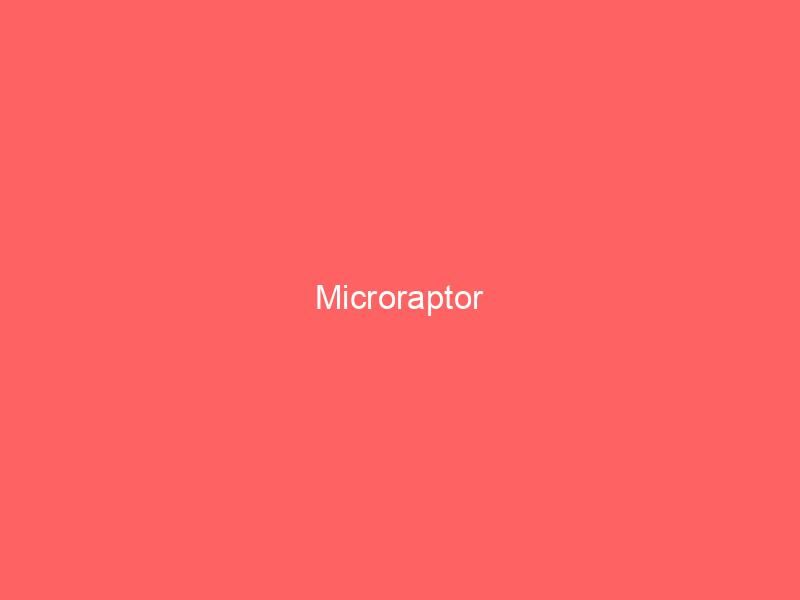 The Microraptor was a genus of dinosaur within the dromeosaurid family. It’s a spectacular bird dinosaur that once inhabited our precious planet. It is the dromeosaurid of which more remains have been found, surpassing more than 300 fossils discovered that can be seen in several museums.

Basic information about the Microraptor

The Microraptor was a flying dinosaur and bears a great resemblance to today’s birds. This animal lived in the skies thanks to the wings it had on its four extremities. Do you want to know more about it? Let’s start by looking at the basic information about our friend.

The taxonomy of the Microraptor

Several species of dinosaurs have been found in the genus Microraptor. It must also be taken into account that at any time they can increase (as they are discovered) or decrease (if it is proved that they were misclassified). We will take care to keep this section updated in case of future changes.

Note: The strange name of these species is due to the fact that the discoverers were Asian.

Microraptors are classified within the family of dromeosaurs. This means that they adopt most of the general characteristics of this family and it is necessary to know in order to know the Microraptors better. Below we will discuss details and interesting features of the dromeosaurids.

The morphology of dromeosaurs is very similar to that of today’s birds. That is why many theories have emerged regarding the relationship between this family of dinosaurs and birds. It is possible that today’s birds are related to or descended from dromeosaurs.

Speaking a little more about the physical features of this family, it is worth noting that they had a large skull, saw-like teeth, a fairly narrow snout, and eyes that stared straight ahead.

The neck of this group of dinosaurs was long and half S-shaped. The trunk of the dromeosaurids was short in proportion to the body from which long arms protruded that could bend and stick to the surface of the body.

This group of dinosaurs adopts many characteristics of theropods, as the dromeosaurid family belongs to the order of theropods. Most theropods only made use of two of their limbs (they were bipeds).

They had rather long four-fingered legs with a large sharp claw on the second finger. The most curious thing was that all their weight fell on only two of their toes on each leg, while the toe where the claw was and the toe before it did not touch the ground.

The size of dromeosaurs was quite small compared to other dinosaurs (although there were exceptions). There are specimens that measured 6 meters like the Utahraptor and some that even reached 11 meters. It is clear that this is not the case of the Microraptor, which was considered a small dinosaur that barely reached one meter in length.

The dromeosaurs’ tails were really long and quite thin. On most of its surface it had bone vertebrae, bone tendons in some genera and rod-shaped extensions. Their tails were really narrow and it is very likely that they only had two elongated feathers.

The individual control of each part of its tail was null, the whole tail moved together using as a turning point its union to the body. The function of the tail would have been to stabilize and to make counterweight to maintain the balance in flight. Although another theory that also gains strength is that it was simply used for courtship and not precisely for aerodynamics.

This family of dinosaurs had feathers. In fact, this is one of the main reasons why dromeosaurs are linked to today’s birds. This group of dinosaurs was covered with feathers of all kinds of sizes.

Not only their body would have been covered with feathers, but also their wings, as well as the tail where they had fan-like feathers, the latter feathers would have had aerodynamic functions.

However, the length of the feathers in the different genera varies in proportion to the size. That is, smaller species such as the Microraptor would have had smaller feathers than the Utahraptor.

Although they had feathers and looked very much like today’s birds, not all dromeosaurids were capable of flight. The wings that all of this family had are not the only thing needed to be able to fly (see penguins).

Now that we have learned more about the family to which it belongs, we can already get a slight idea about this dinosaur. We will now go a little deeper into the characteristics and features of the Microraptors.

The Microraptor is a rather peculiar dinosaur and is often known as the four-winged dromeosaur. It is the first dinosaur that was discovered to have feathers and wings and did not belong to the Avialae family. It has a lot of resemblance to troodontids and birds.

To better adapt to flight, these dinosaurs had a relatively small and short body, though this did not prevent them from being rigid and strong because they had very few dorsal vertebrae. In addition, their body was covered with a thick layer of feathers. His feathers would have had a bluish or black color, as recently published in the magazine Science.

The really curious thing about these dinosaurs is that they had feathers on all four limbs. Compared to common birds, they would only have feathers on their arms but not on their legs. Hence the name it’s popularly known as, four-winged dinosaur.

The legs of this dinosaur had long specialized feathers for flight as we could see in modern birds. Just like the latter, its rear wings were anchored to the hand and also to the arm. This pattern is repeated in the wings on its legs, which, as we mentioned, modern birds lack.

The fact that these dinosaurs had wings on their legs would have made it difficult for them to walk on the ground. The morphology of this animal makes it very difficult for it to move on the ground, let alone run. The great length of its wing feathers prevented it from moving its wrists quietly.

They would have moved from tree to tree, using their wings to glide from branch to branch in order to reach their prey. This deduction is based on the fact that the morphology of his body does not indicate that he was a great climber.

Why were they called Microraptors?

The story of this dinosaur’s name is quite controversial. This is because the tail of a Microraptor was found and in the absence of the other remains, they joined the tail of the Microraptor with the top of a Yanornis and gave it the name of Archaeoraptor.

Obviously that specimen was not validated internationally because it was a fake. It was then that the paleontologist Olson associated the said tail with the name of Archaeoraptor, but finally this did not happen.

The palaeontologist Xu Xing was also part of the research of Archaeoraptor and his team managed to find the other remains that would accompany the tail already found. Xu Xing decided to name the new species found as Microraptor zhaolanus.

This created a controversy between whether to consider it as Archaeoraptor or Microraptor. Although Mr. Olson was the first to name this species, it must be remembered that it was never recognized. On the contrary, Xu Xing provided a detailed description and a totally valid specimen so that he gained the acceptance of the majority and with that this genus of dinosaur was finally named Microraptor.

When did this dinosaur live?

Nowadays in the world there are many things to discover, many species of marine animals that live at the bottom of the sea or in inaccessible places. We barely know all the species that exist on the planet today and things are much more difficult if we are talking about animals from the past.

This is the case of the Microraptor, a genus of dinosaur that has been discovered and of which we cannot know much more than possible deductions from its remains. This dinosaur inhabited millions of years ago, and no doubt what we know about it is an achievement.

The Microraptor began inhabiting our planet at least 131 million years ago in the past. According to what we know about it, it would have been extinct about 125 million years ago. Our friend would have inhabited the Earth for about 6 million years, no doubt a number of years that leaves less than 200,000 years of man’s existence in the ground.

Where did the Microraptor live?

Biologists are researching the different species of animals on a daily basis. There is still some uncertainty regarding the current animals and species of the planet, and even more so if they are extinct as is the case of the Microraptor. Nevertheless, as technology advances, we can learn more and more about our planet’s fascinating past.

According to researchers, the Microraptor is said to have lived in trees. As we mentioned, the wings of its feet would have made it difficult for it to live on the ground, let alone walk on it. The area it would have covered is the current area of Asia, at least it would have done so in northwest China.

What did the Microraptor feed on?

As we have commented when talking about its characteristics, the Microraptor would have been an arboreal animal. This means that it lived in trees and that is why it would have fed on animals that lived in them. The prey of this predatory animal would have been other birds, which would have ended up inside its stomach.

But it seems that it wasn’t just birds that were its prey. Remains have been found inside the stomach of a Microraptor zhaolanus which would have corresponded to a mammal. Among the remains are mammals such as the Eomaia and the Sinodelphys. However, this was not enough for these predators, as it would have also fed on lizards such as the Xianglong.

In 2013, researchers found nothing less than fish scales in the cavity of a Microraptor specimen. This would mean that in addition to eating lizards, birds and mammals, it would also have filled its stomach with fish. So you could say that the Microraptor was feeding on what it could, whether it was in the trees or in the water.