I’m sure this dinosaur looks a lot like Triceratops to you. Which is not unusual since these two dinosaurs belong to the same family. The so-called Ceratopsidae.

Although they differ in some aspects that we will explain in this article.

The Monoclonius is a ceratopsian with the typical characteristics of the chubby but strong body and a large crown on the back of the neck.

This crown not only served as a defense against predators but also as a fight between males and females, something similar to what some birds and large mammals can do today.

According to the studies this ceratopsid could reach a length of about 9 meters and weigh about 2 tons. According to him, he was a grazing animal with average intelligence.

At first we know that he lived in the Upper Cretaceous and that his remains were found in Alberta, Canada. In the upper layers of the famous dinosaur park formation. According to scientists, these fossils date back some 75 million years.

At first, when it was discovered, a great debate began, since some people pointed out that these remains did not correspond to a new genus, in this case monoclonius, but rather to the genus Centrosaurus.

Do you find this information interesting, read on to learn more about this dinosaur!

The Monoclonius is one of the dinosaurs with more species found, in total 12 species of this dinosaur have been found, which has helped to obtain a great deal of information from it.
Among the characteristics that have been discovered of this dinosaur we have:

The problem with this ceratopsian is that it has suffered many comings and goings in taxonomic groups throughout history since its discovery, and it still goes on and on. Here is his current ranking:

Following the taxonomic classification of Monoclonius, it is subdivided into 13 species, which are:

At first, there was a great deal of debate about how to classify this animal. It shared many similar characteristics with the Centrosauros.

In fact, both genders had only one horn and their morphology was too similar. So many paleontologists related them easily. Others, however, went deeper into the analysis of the fossils found.

And so establish two totally different genres, but they belonged to the same family of dinosaurs. The great Ceratopsidae family.

What does the name Monoclonius mean?

The name Monoclonius means “a single horn” because of a long, sharp horn above the nostrils.

Although it is not the only ceratopsian that has been found with a single horn it was the first to be discovered with such characteristics, so it earned the honor of that name, although it could live in period with the Centrosaurus, in the Cretaceous of 80 million years ago, but its remains have been found in Montana (USA).

This horn has been found in various forms, both completely straight and curved forward. This could indicate that they are either two distinct species or have been degraded by the pressures of so many layers of land over millions of years.

Monoclonius was discovered in 1876 along with a great variety of fossil species (not yet cataloged at that time), and was introduced to the group of hadrosaurs (where the Parasaurolophus or Coritosaurus appear) and was named by Edward Drinker Cope as Monoclonius because it only had one protuberance.

Later, in 1889, Othniel Charles Marsh introduced him to a new group when he conducted a study on Triceratops, creating the group of ceratopsians. This meant that the protuberance that Drinker Cope represented was not such, but a large horn over the nostrils. 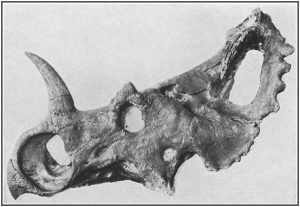 In the late 1980s and early 1990s, there was a reorganization within the Monoclonius. It was noted that not all the fossils listed as such were of that species. By differentiating them, new genera were obtained such as Centrosaurus, Avaceratops, Brachyceratops, Chasmosaurus, Eoceratops, and Styracosaurus.

At present, it is still doubtful whether Monoclonius is still a single species, although in 2006 it was confirmed that its genome (what was obtained) represented a subadult, a large one.

This ceratopsian has opened and given life to a great variety, many of them have been treated this past month, and how better to close the ceratopsians than with the one who introduced them.

Where and when did the Monoclonius live?

Monoclonius lived in the Cretaceous period, approximately 76 to 73 million years ago, towards the end of the Mesozoic.

The Dinosaur Park Formation, in the upper Cretaceous, had a warm climate, with dry/humid seasons and no frost at all. Everything was conducive to the reproduction and growth of many species of flora and fauna.

In this formation conifers were easy to find, in fact, it is said that it was covered by a coarse green vegetation. With a large understory made of ferns and flowering plants.

That was the habitat of this one-horned dinosaur. the home he shared with other dinosaurs like the hadrosaurids Gryposaurus, Corythosaurus, Centrosaurus, Euoplocephalus, tyrannosauride Gorgosaurus and lambeosaurus.

What did the Monoclonius eat?

Due to the shape of its teeth and mouth, it was easy to deduce that it was a herbivore, in addition, that most of the dinosaurs belonging to the family of the ceractorausios are herbivorous.

It is believed that this animal lived in herds and grazed long during the day on the rugged plains of the Alberta formation. It fed on the fruits of the bushes and also on turbines buried in the sand. Some paleontologists report that they moved from one place to another in search of food.

On his steering wheel, he was relatively small and had a characteristic horn placed on his nose pointing upward and two smaller horns above his eyes. The muzzle, this one was short and ended in a toothless parrot-like beak, and it had many teeth in its jaw.

He walked on all fours, his legs had hooves, he had a bulky, short, thick body. its tail was at first thick and finally pointed.

The monoclonius is a herd animal, but very territorial, in fact, many paleontologists claim that it was nomadic and that it made long journeys in search of food and better grazing areas. That’s why it was very common to see large herds crossing rivers. Where they were easy prey for several predators.

The males were very dominant, usually one alpha male or leader per herd, who led the rest. He was constantly involved in battles with other males seeking the alpha male position.

How did they mate?

The females generally gave signs that they were in heat, and the males came to court her; showing they were flying and strong. If two males were pretending to have only one female, they would fiercely fight in order to give a winner.

Usually, the alpha male was the one who had the privilege of mating with the majority of the females and very few dared to confront him. It was a case in point.