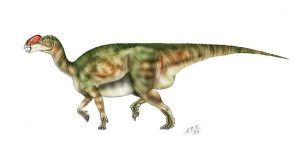 In this article we will talk about the Muttaburrasaurus, one of the best known dinosaurs in Australia; let’s know a little more about this dinosaur. Read on.

What does the name Muttaburrasaurus mean?

Muttaburrasaurus is named after the town of Muttaburra in Queensland, Australia, where the remains of the holotype were discovered by Doug Langdon in 1963.

History of the Muttaburrasaurus discovery

The species was first described on the basis of an incomplete skeleton discovered in 1963 by Doug Langdon near Muttaburra in Queensland, Australia, which gave rise to the genus and species name.

The name was given in 1981 by Dr. Alan Bartholomai and Ralph Molnar.

It is believed that the animal’s carcass was carried by the sea before being covered by sediment.

On the other hand, what would have been a few teeth were also found north of Hughenden and south of Lightning Ridge.

In 1987 the paleontologists John Stewart-Moore and Robert Walker, discovered a skull that they called “Dunluce Skull“, name given because it was found in Dunluce Station, the one between Hughenden and Richmond.

Fragments of a third skull were found at Lona, also near Hughenden.

In addition to these findings, some teeth are known to have been found south of Lightning Ridge in north-west New South Wales. After Minmi, it is the most complete dinosaur in Australia.

A reworking of this group in 1990 by paleontologists David Norman and David Weishampel confirmed that the genus belonged to the Iguanodontia, but placed it outside the Iguanodontidae.

The exact relationship of the genus is not yet clear, but it could be closely related to Tenontosaurus and Zalmoxes.

When did the Muttaburrasaurus live?

This dinosaur lived in the mid-Cretaceous, about 100 million years ago, in what we know today as Australia.

What did the Muttaburrasaurus eat?

Muttaburrasaurus was an iguanodon dinosaur, a group of medium-sized herbivores that have their origins in the Jurassic, whose descendants would become the late Cretaceous hadrosaurs.

This dinosaur could reach a length of 8 meters and weigh about 3 tons. 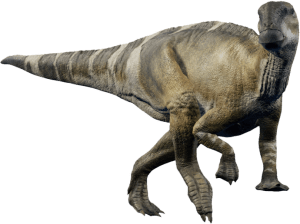 Although it is often presented as a biped, the truth is that the Muttaburrasaurus probably spent most of its time on four legs.

Besides, in this posture it is easier to maintain the body proportions of the mime.

The Muttaburrasaurus was probably able to swing and possibly walk on its hind legs, while reaching for higher plants.

The ability to switch between bipedal and quadrupedal postures as the situation warranted meant that the Muttaburrasaurus could potentially reach a wide variety of plant types.

One interesting thing about the Muttaburrasaurus is that the teeth are more suitable for slicing than grinding as in many of its herbivore relatives.

This led to early speculation by Ralph Molnar that Muttaburrasaurus might have supplemented its diet with meat.

Although in 1995 Molnar published a new theory suggesting that the teeth were a convergent adaptation to the Ceratopian dinosaurs.

More support for this convergent evolution comes from the fact that the Ceratopsians are distant but also more closely related to dinosaurs like Muttaburrsaurus than most other types of dinosaurs.

Perhaps one of the most distinctive characteristics of the Muttaburrasaurus is the ridge that rises from the front of the snout, which may or may not have supported an enlarged soft tissue mass at this point.

Some of the theories about this ridge hold:

However, more confusion comes from the observation that in the currently known Muttaburrasaurus skulls, the ridge is slightly different.

That is, a skull has a shorter nasal crest and is also a bit older than the holotype, which increases the possibility that the crest may have changed shape during the development of this dinosaur.

On the other hand, the difference may be due to the fact that the skulls come from both male and female individuals, which could suggest a sex-differentiating function.

Any of these theories and perhaps more than one can someday be proven, but right now it is difficult to be sure without the discovery of new Muttaburrasaurus fossils.