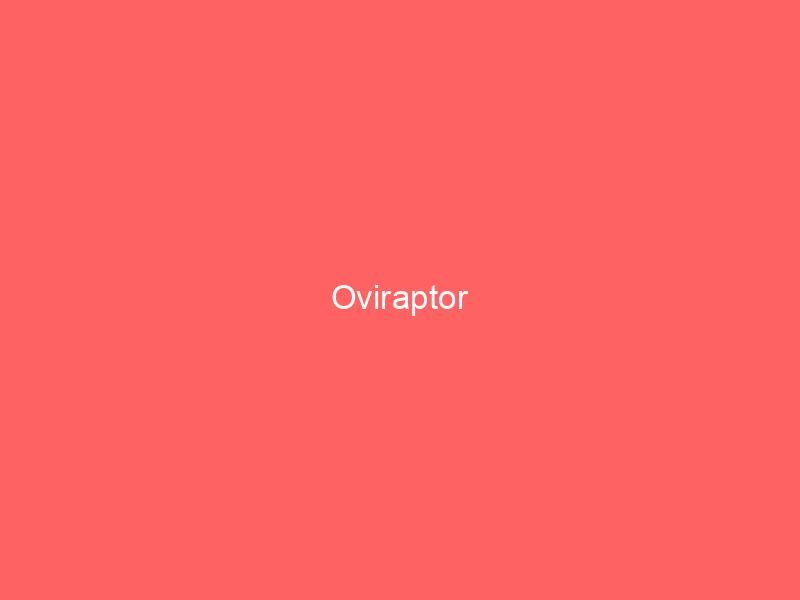 The Oviraptor was a genus of small dinosaurs that existed on Earth in the Cretaceous period (about 80 million years ago). It is classified within the group of the theropod dinosaurs Oviraptor.

The most peculiar feature of this genus would have been the peculiar bone crest on its head. It also had a peculiar curved beak with which it supposedly would have plucked leaves from trees with relative ease.

The dimensions of the Oviraptor were those of a small dinosaur. It was a little over a meter high and about two meters long. As for its weight, it would have been about 50 kilograms.

At Dinosaurioss.com we have the most complete information about the Oviraptor on the web. Stay here and read on to find out all about the omnivorous dinosaur of the Cretaceous!

What does the name Oviraptor mean?

The name Oviraptor means “egg thief”; the name is derived from the word “ovi” meaning “egg” and “raptor” meaning “thief”. This name was coined because his find was near a nest, which was presumed to be trying to steal the eggs.

This small dinosaur was discovered in 1923, during the expedition carried out by a team from the Museum of Natural History of New York in the fossil site of Bayanzag located in Mongolia. In such expedition, technician George Olsense came across what would be the first finding of fossil eggs made so far. These eggs were concluded to be from Protoceratops.

Very close to that great discovery was our elusive fossilized friend, the Oviraptor. The researcher responsible for this discovery was Henry Fairfield Osborn, and he described that this dinosaur had apparently died during a sandstorm, while trying to steal the aforementioned eggs.

Years later it would be discovered that our theropod friend was not really a thief, but a dedicated mother who had the habit of hatching her eggs like modern birds, and that the eggs found in the nest did not belong to the Protoceratops but to the Oviraptor.

Where and when did she live?

Our egg thief lived about 85 to 75 million years ago in the so-called Late Cretaceous. Many of his fossils were found in Mongolia and various parts of Asia.

The Oviraptor was a slightly smaller dinosaur compared to other dinosaurs, it was about 2 meters long and a little more than 1 meter of something, and it weighed about 50 kilograms, this dinosaur is part of the group of typical Cretaceous species found in Asia and North America.

The Oviraptor also fed on some molluscs and snails, although some researchers concluded that it fed on leaves due to the shape of its beaked and toothless mouth, which made it easier to pull the leaves off. It should be clarified that its diet today is a matter of research, as there is a debate as to whether it was a carnivore or an herbivore, although other researchers have sought to settle that argument by concluding that it was omnivorous.

Like most theropods, it probably had feathers. In fact, many researchers indicate that it nested its eggs as modern birds do, on the other hand it is also presumed that it waved its feathers and danced in order to attract the female’s attention (although this is already more hypothesis about its behavior and biology than we have conclusive results).

With respect to its head, the Oviraptor had a prominent bony crest. In general, its face was like that of a parrot, as its mouth was very similar to that of a very curved beak. This dinosaur had no teeth in its jaws, however, its jaw was hard enough to break the shell of snails. With its three claws in each hand it could hold snails and other prey.

The Oviraptor was not a fighter and our little friend knew it. He was not endowed with great muscles or great strength. So through its speed, agility and small size it tried to avoid confrontation and did its best to stay under the radar, so as not to attract the attention of fearsome dinosaurs such as T.rex and be largely ignored by other predators.

Some curiosities about the Oviraptor

This little guy has been present in different film productions such as those of James Gurney in the movie “Dinotopia”. The funny thing is that in that film his name was changed to “Ovinutrix” which is understood as “egg keeper”, in an attempt to correct the mistake about his name.

He also appeared in the Disney movie “Dinosaur” in which he is seen stealing an egg from an Iguanodon. Here you can see the trailer of the movie and watch the scene mentioned in the minute 0:27.