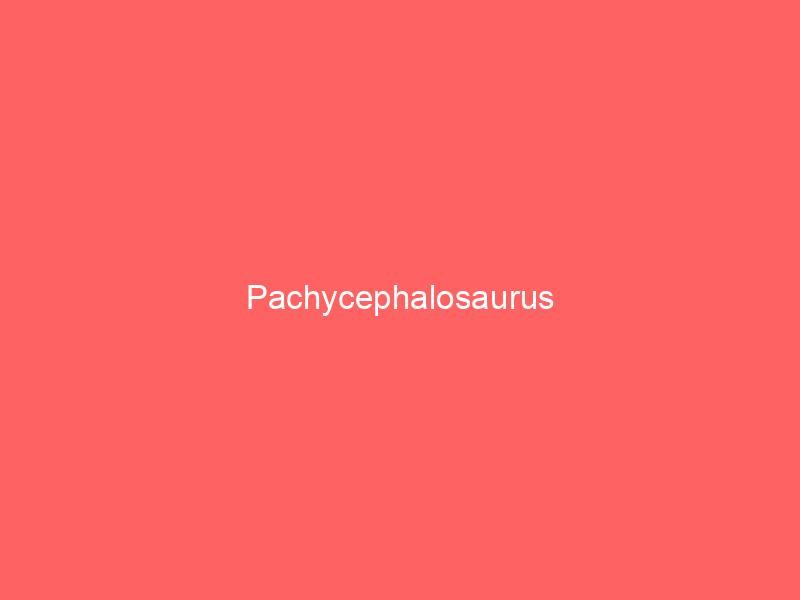 One of the most famous herbivores known from the Mesozoic is the Pachycephalosaurus, whose name means “thick headed reptile”.

The Pachycephalosaurus was a biped dinosaur with a solid, compact bony skull that resisted great blows and speedy onslaughts.

Very famous for movies like Jurassic Park where it makes some appearances and also quite popular for its particular appearance and physiognomy.

The family Pachycephalosauridae is made up of very similar specimens, but with certain differences.

All of them have much longer hind legs than the front ones, denoting a bipedal character and in addition to a runner, along with a thick tail to maintain balance, and a thick and muscular shock absorber.

A really powerful dinosaur with a very particular look that would make it popular among many people, highlighting of course its large egg-shaped head.

Pachycephalosaurus belongs to the group of ornitischians, a group of mostly herbivorous animals with hips similar to those of today’s birds (although they were not the ones that left the birds as descendants).

The Pachycephalosaurus belongs to the family Pachycephalosauridae, being a clade very close to the ceratopsians such as the Triceratops or the Styracosaurus, with which it shares some characteristics such as a skull with a mouth that ended in a beak, similar also to the current turtles.

Anatomy and characteristics of Pachycephalousaurus

The Pachycephalosaurus was an animal that reached 5 meters in length, and a height close to the average human height between 1’70 and 1’80 meters.

One of the most striking features of Pachycephalosaurus is a thick skull. Although it is a well known animal, the remains found do not even complete a skeleton, only having remains of the skull and some other parts of the body, so the representations and skeletons have been completed by comparing it with nearby species such as Wannanosaurus, of which there are remains of the skull, vertebrae, tibia, humerus and hip bones.

The structure of Pachycephalosaurus, of which we have indicated has been hypothesized in many aspects, consists of powerful hind legs, a light yet strong body, a rigid tail to maintain balance in race and smaller but not atrophied front legs as those of Tyrannosaurus or Carnotaurus, but could use them as a support point to get up from a fall as other animals do.

The most studied character for which Pachycephalosaurus is best known is its skull. It attracts attention because it is 25 centimeters thick of hard bone, which at first was thought to protect the brain from powerful onslaughts. Along with this massive skull, it has been hypothesized that a muscular neck would follow it, protecting the rest of the body and mainly the spine from a high-speed collision, as well as keeping the body completely straight and rigid so that the point where it would strike would be highly damaged.

As many of us have seen in “Jurassic Park: The Lost World”, the second installment of Jurassic Park, a Pachycephalosaurus appears ramming an SUV and a paleontologist explains how he manages to do so without suffering any damage. As we mentioned before, its neck cushioned the damage to its spine and its massive 25-centimeter-thick skull allowed for a hard charge that few things could resist.

There is currently controversy over this “lunge theory”. Two famous paleontologists, Horner and Goodwin, made a series of discoveries in some Pachycephalosaurus skulls. They were not entirely massive, but were made up in part of spongy bone tissue, a type of bone tissue that made the bone lighter as well as stronger. The downside of this spongy bone tissue is that, unlike solid bone tissue, it does not withstand blows as well, so the lunge theory falls apart, especially if we imagine head-on collisions between two Pachycephalosaurus in a manner similar to the collision that two buffaloes would make.

Moreover, even if the egg-shaped skull could cushion the direct blow, it could only withstand one or two successive blows, having to avoid hard onslaughts for a long period of time as it could cause serious brain damage.

Other current studies do not rule out that they could ram with such a skull, but like Horner and Goodwin they would not ram against objects as hard as the skull.

Some authors think that the ram would go against softer parts or thinner bones that would break more easily in a high-speed ram. It is thought that the powerful charge could have been made against carnivores that would attack the herd, leaving it in pain or even with a broken leg if the aim did not fail.

As has been said in other entries, in the animal kingdom a very striking character is usually related to sexual attraction. In the case of Pachycephalosaurus, in addition to sexual attraction, it is thought that it is related to the maturity of the individual, so that the larger and thicker it is, the more mature and striking it is, so that it would be more attracted to the opposite sex.

The family Pachycephalosauridae consists of about 15 different species, although some of them are “nomina dubia”, that is, dubious names since they can be actually ceratopsians, like Micropachycephalosaurus, or even some kind of ankylosaurs as it is the case of Heishansaurus.

This doubt is due to the fact that there are not many remains in the fossil record belonging to species of the family Pachycephalosauridae, in which most of them are only remains of the skull or some vertebrae.

Within the family Pachycephalosauridae, we can find the oldest specimen called Wannanosaurus dating from the early Cretaceous, barely 60cm long.

In the great majority of the family Pachycephalosauridae many similarities can be observed between them, so that it has begun to think that in fact some are the juvenile forms of others. It all started when paleontologists realized that in the fossil record there were no “baby dinosaurs”, no juvenile forms or anything like that. Many specimens began to be observed again, and among them the family Pachycephalosauridae is one of the most changed.

Among the specimens of the family Pachycephalosauridae that have undergone this change, the Homalocephale stands out with a characteristic flat head and is speculated to be the juvenile form of another member of the family, known as Prenocephale.

Some of the most famous specimens that came into question as to whether or not they belonged to the same specimen of different ages are members of the genera Dracorex and Stygimoloch.

These specimens at first can be seen as different from the Pachycephalosaurus, due to the fact that the skull of Dracorex is almost flat (it only has some protuberances like small horns), that of Stygimoloch with a small region of eggs, and the Pachycephalosaurus totally egged. Because they belong to the Cretaceous and the remains found are almost contemporary, the possibility that they were forms evolved from a basal Dracorex has been discarded and there is a large group of paleontologists who think that the Dracorex and Stygimoloch species are actually juvenile forms of Pachycephalosaurus.

Not only due to the appearances of Dracorex and Stygimoloch, the genus Pachycephalosaurus has suffered changes and doubts about where to place it at a taxonomic level. Currently it is confirmed that Pachycephalosaurus is a genus within the orniticles, but it has also been named in other ways.

Originally, Pachycephalosaurus was named Tylosteus. The name Tylosteus was the first name given to it, and when the Troodon controversy passed it should have been given back its original name and not left Pachycephalosaurus. Only specimens that are well known for their “second name” are left with this name, although the vast majority of animals have the first name that was given to them.

In the previous section it has been indicated that Pachycephalosaurus was initially grouped together with the Troodon because only the teeth were known. This called into question the strictly vegetarian character of Pachycephalosaurus, so studies began.

The jaw of Pachycephalosaurus is made up of a series of small, slightly serrated teeth, plus the mouth ends in a beak. At first it was thought that it would be strictly vegetarian because of the similarity with the ceratopsians in the mouth structure, but the teeth are small and not very strong compared to the molars of the dinosaurs with horns.