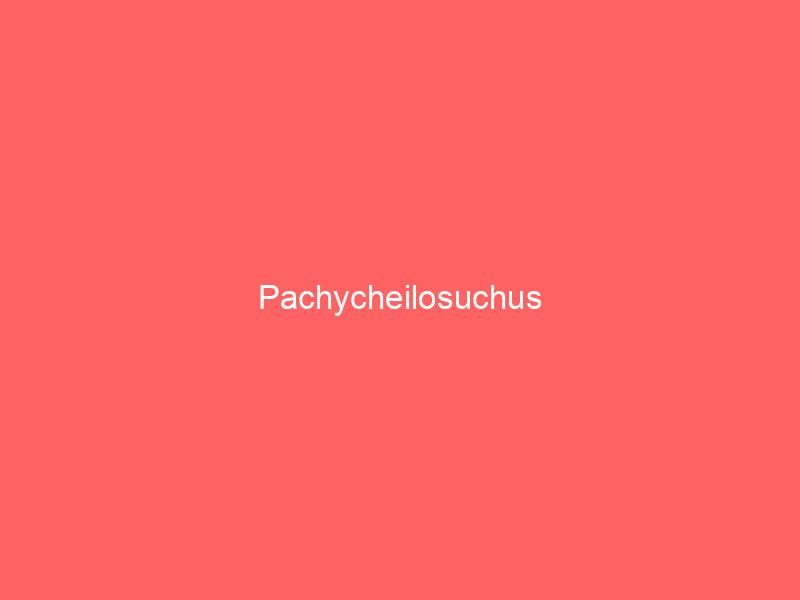 Pachycheilosuchus trinquei is the first and only species found to belong to the Genus Pachyllesuchus. The last time our planet saw these specimens alive was about a hundred million years ago.

The general appearance of this prehistoric genus is very similar to that of today’s crocodiles. This great similarity with crocodiles has its logical reason and is that precisely the Pachycheilosuchus were the ancestors of these current animals. If you want to discover more about these prehistoric crocodiles, do not hesitate to read on.

If you are interested in finding out more about Pachycheilosuchus, read on and find out all about this prehistoric crocodile!

If we go deeper into the Genus Pachycheilosuchus we will only find one species, P.trinquei. Although currently only this species is classified within the genus, it must be taken into account that at any time new species could be found and even declassify the only species there is. Therefore, we will try to keep a constant update regarding future changes.

So far we have seen the most basic features about our friend, but we still need to know his more specific characteristics and features. To make it clearer all about this prehistoric animal, below we will see the characteristic features and detailed information about the Pachycheilosuchus.

Within the crocodilomorphs it was not really remarkable. According to the remains found, the longest thigh bone is only about 9.1 centimeters long. Based on this, deductions are made about its length, which at most would have been about 80 centimeters long.

It has also been deduced that within the remains analyzed there were both adult and young specimens. This is contrasted by the fact that among the remains found there was also an egg that could only have been laid by a specimen that had reached sexual maturity.

The most curious thing about these crocodilomorphs was the arrangement of their teeth. It would have had quite noticeable lips, with its teeth actually separated from them. Also thanks to the remains of the jaw, it has been possible to prove that in the maxilla it had a wound probably caused by a larger predator, so the Pachycheilosuchus would have been on some occasions the prey.

The muzzle was short, rather short and flat at the same time. In addition, the vertebrae of its neck, back and tail were prolapsed, especially those in the neck. This would be to have the front vertebrae in concave form and the back vertebrae in convex form. They also had a slight dimple in the back vertebrae, a characteristic feature that distinguishes Pachycheilosauchus from the Eusuchian-type crocodiles (crocodiles that originated in the Cretaceous period, the ones that currently appear on Earth).

How was their discovery made?

Most of these remains, including the prototype SMU 75278, were found in Erath County, a county located in central Texas. To be more specific, they were found in the Glen Rose Formation over there. They were found specifically in a bone graveyard on limestone. The cape where it was found suggests that it would have been inhabited during the early Albian Age.

The remains can be found at both the National Museum of History and the Texas Memorial Museum. In the former we will only find one skull, while in the latter we will find two partial skeletons and several loose bones.

Why was it called that?

The reason for the name of the genus has its origin in Latin. The word Pachycheilosuchus, translated into our language, would mean nothing more than a thick-lipped crocodile. On the other hand, if we talk about the only species that has been found in the genus, Pachycheilosuchus trinquei, the origin of its species has less meaning.

The fact is that they decided to name it after Lance Trinque, who was a peasant who collaborated with the discovery and excavated the area where the remains of this prehistoric crocodile were found.