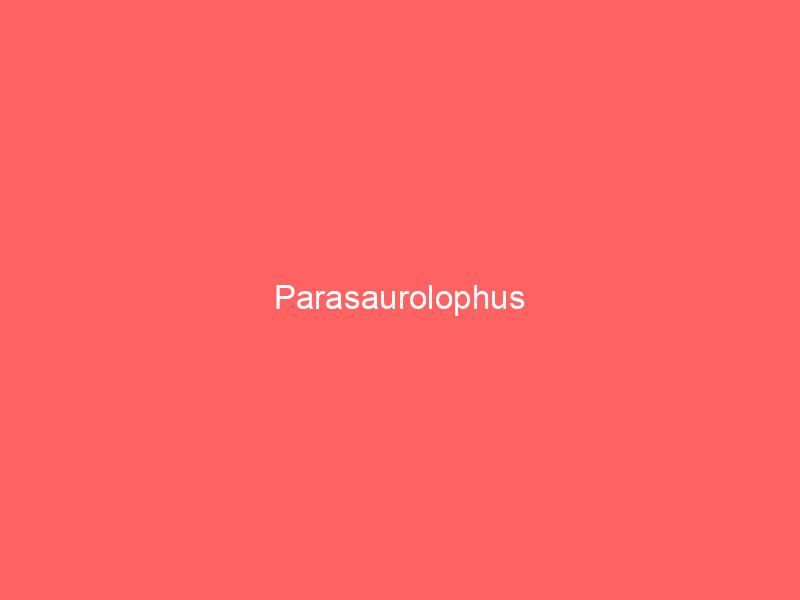 The Parasaurolophus was one of the most peculiar dinosaur genus that has inhabited our planet during the Upper Cretaceous (about 83 million years ago). It is a specimen that belongs to the group of the ornithopod dinosaurs hadrosaurids.

This genus would have had a really extravagant aspect since it would have had two long hind legs with which it fled from its predators and its front legs were much shorter.

The main characteristic of this dinosaur and those of its group is the great similarity of its beaks with those of today’s ducks. The hadrosaurs are also known as the duck-billed dinosaurs.

If you have found interesting what you have read about it, stay with us because there is much more information about the Parasaurolophus. Discover with us everything about this herbivorous dinosaur from the Cretaceous!

What does the name Parasaurolophus mean?

Its name literally means “almost a crested lizard”, this name comes from the words “παρα” (for) which is understood as “near or together”, “σαυρος” (Saurus) which means “lizard” and finally “λοφος” (Lophos) which would be “crest”. This name was given because of its great resemblance to the Saurolophus.

Who discovered it and how?

The first discovery of the Parasaurolophus was in 1920 during an expedition by the University of Toronto. These fossil remains were found in the area called Sand Creek, a place very close to the Red Deer River in Alberta-Canada. This discovery was made by the William Park.

The skeleton found was not complete and only some parts were in good condition. The sample was composed mainly of the skull, part of the tail and missing bones below the knees. However, these remains were enough to advance studies and research that helped to know more about this ornithopod.

It must be said that this was not the only finding, there were also two more findings of equal relevance, taking into account that the first one did not contain the complete skeleton. So these latest discoveries allowed for more information about this dinosaur.

One of these later discoveries was in 1921, by researcher Charles H. Sternberg, who found what would be a not very complete skull, in the Kirtland formation in New Mexico.

This skull would help determine that another species of Parasaurolophus existed (the first species was called Parasaurolophus walkri), a species that paleontologist Carl Wieman would call P. tubicen in 1931. This name refers to the Latin word “tǔbǐcěn” which means “trumpet player”.

As for the third important finding, it was made by researcher John Ostrom in 1961, at the base of the Fruitland formation located between Texas and New Mexico.

This specimen found was a little more complete than the previous one since it had a shorter and more rounded crest skull that differentiated it from the other two specimens, and it also had a good part of the torso bones, while of the extremities, the tail and the neck there were no remains.

Later on, more skulls of this type were found, and a third species was named P. cyrtocristatus.

In summary, we see that throughout history several skulls and remains of skeletons of the Parasaurolophus have been found, which little by little made their characteristics and behaviour better known. As a result of these discoveries, three species were finally determined, called P. walkeri (1922), P. tubicen (1931) and P. cyrtocristatus (1961), which can be differentiated above all by the shape of the skull, its crest and size.

The Parasaurolophus lived approximately 83 million years ago in what is now North America at the end of the Cretaceous period, along with other dinosaurs known as Albertosaurus, Kritosaurus, Lambeosaurus (another hadrosaur), Euoplocephalus, Nanotiranus and Pachyrhinosaurus.

The Parasaurolophus was on average 10 meters long, approximately 2.80 meters high, weighed about 5 tons and had rough skin. Although it must be taken into account that these data may vary depending on which species it is.

To frame a little; the measurements described above refer to the P. walkeri species, while if we talk about the P. species the data provided according to the fossil findings indicate that it was a larger dinosaur than the one previously described.

As for its “mouth”, it has the shape of a duck’s beak. It walked using either two legs or all four, so it is considered to have long, powerful hind legs and slightly shorter front legs in comparison. On the other hand its tail had an elongated and somewhat flattened shape that some scientists have assumed it could have used for swimming.

Regarding its diet, the fossil content found in its stomach indicates that it was herbivorous and fed on plant parts such as leaves, seeds and conifer needles.

This food was easily crushed by a number of small teeth oriented in columns, which it changed once they deteriorated. Due to its herbivorous nature it is presumed that its habitat was mostly rich in vegetation.

Without a doubt the most striking feature of this hadrosaur was its excessively long, backward-facing bone crest. This crest was hollow inside, very similar to that of the Lambeosaurus.

This bone crest reached a length of up to 1 meter and was slightly curved downwards, rising from the nose and passing over the entire head until it extended outside the head in a downwardly curved form. The use of this ridge is not entirely clear, however, different theories have been put forward.

One of the first hypotheses was that of Alfred Sherwood Romer, in which he suggests that the ridge was used as a “breathing tube” and that it also served as a reservoir of air when it was submerged in water. This theory is based on the fact that this dinosaur was amphibious, that is, it maintained life on land and in water.

Later on, Othenio Abel proposed that this ridge served as a weapon when a Parasaurolophus specimen faced other species or a predator. On the other hand, it was also said that he used the ridge to make his way through the foliage.

However, these theories were rejected by the scientific community as there was no physical evidence to validate them. For example, the ridge could not be used as an air chamber since the accumulated air would not be enough for a dinosaur of such a size, and the position and shape of the ridge would not have served either as a “weapon” or as a way to clear the foliage.

But then what did the ridge do, researcher James Hopson establishes that it was a sexual differentiator, claiming that the small ridge Parasaurolophus were female, while Thomas Williamson suggests that the small ridge indicated that this dinosaur was in puberty. That is, the younger the smaller and the older the longer, regardless of gender.

Another of the most valid hypotheses is that this ridge was used as a visual differentiator, in fact from several studies it has been determined that the Parasaurolophus was a daytime animal with good eyesight. This suggests that it was important to distinguish and identify other dinosaurs of its species.

On the other hand, it is also believed that the ridge was used by this unique dinosaur to make sounds like a cromorph (a popular musical instrument in the Renaissance). Finally, it has been thought that the ridge served as a thermoregulator, allowing the brain to cool down easily.

It was a fairly calm herbivorous dinosaur, usually walking on all fours, and standing on two legs to reach fruits and plants that were high up. In addition, it has been speculated that it had the ability to swim helped by its large hind legs and flattened tail.

He had very keen senses, in fact it is known that he had small cavities, very similar to those of crocodiles, which served as his ears, adding to his keen sight. It was very easy for it to detect any threat and run away in a hurry, running on only its two hind legs and balancing itself with the tail.

His top predators were the tyrannosaurus Gorgosaurus and the crocodile Deinosuchus.

Some curiosities about the Parasaurolophus