The battleship with pikes

What does the name Polacanthus mean?

The meaning refers to the many thorns in the armor. The specific name honors the naturalist William Fox (discoverer of fossils).

Fox and his team had the idea to name this dinosaur Euacanthus Vectianus but this name was finally rejected.

Fox later announced his finding at a conference and let renowned paleontologist Richard Owen examine and describe the specimen in 1865.

Owen named the specimen Polacanthus foxil, although the official text of the description was published anonymously in the Illustrated London New.

This caused confusion as it could not be established that he had described and given the official name.

Given the confusion some argue that Thomas Huxley in 1867 was the one who named the dinosaur, others attribute it to Fox, some others to Owen or simply give “Anonymous” as the author.

The layer of the formation where this specimen was found dates from the Barremian, said remains consist of a partial skull, neck vertebrae, armor, dorsal vertebrae, partial pelvis, left rear limb, right rear limb, some tail vertebrae and 22 of its characteristic spikes.

Given the confusion caused by the first unofficial description, it would be in 1981 the paleontologist John Whitaker Hulke, who would describe the specimen officially when it was still in Fox’s possession.

Hulke published the first detailed description of the find, noting that the specimen had deteriorated severely over the years, and that the dermal armor had almost completely collapsed.

Later on, Fox unfortunately died and the fossil collection in his possession was acquired by the British Museum of Natural History.

This collection includes the fossil remains of the Polacanthus, which allowed the remains to be reassembled by the preparer Caleb Barlow.

This reconstruction made it easier for Hulke to re-describe the specimen in 1887, with special attention to the arrangement of the armour.

In 1905, the specimen was described again by Franz Nopcsa, who dared to illustrate what this dinosaur might have looked like in life and to characterize the shape of the beak.

All of the above made it possible to ascertain that even before 1865 fossils of Polacanthus had possibly been found.

In 1843 John Edward Lee reported the discovery in Wight of two armoured specimens, which were very possibly Polacanthus.

Since then, numerous fossils discovered in Wight and Britain have been referred to as Polacanthus.

These consist mainly of individual bones or armour elements.

A second partial skeleton, from which parts had been removed since 1876, was identified and completely excavated by Dr. William T. Blows in 1979;

It’s also in the Natural History Museum in London. It is the first specimen from which cranial elements, neck vertebrae and armor were found. 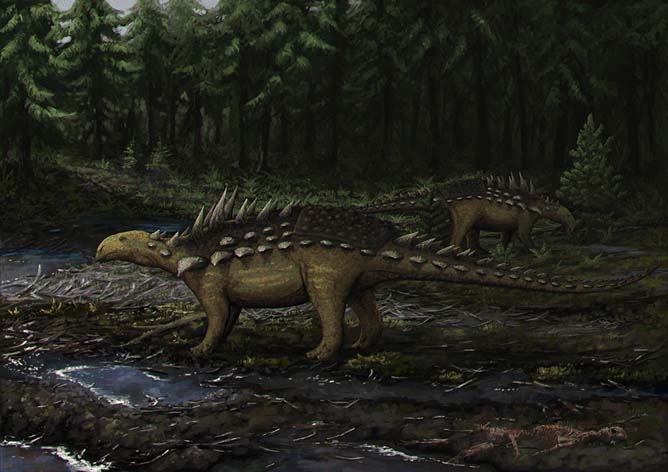 Several Early Cretaceous ankylosaur remains from continental Europe have been referred to Polacanthus but none of them share with their holotype unique features, to be established as a species.

Sometimes they are also known as independent families.

Because of the scarce findings it is difficult to classify them accurately, M. Vickaryous in 2004 typed the Polacanthus as “Ankylosauria incertae sedis”.

When did the Polacanthus live?

The Polacanthus lived 130 to 125 million years ago in what is now Western Europe. In what would be the beginning of the Cretaceous Period.

Polacanthus lived in a warm climate.

This was a place where the abundant rain caused lush vegetation, but the intense heat during the summer season caused months of desiccation.

Then food could be found at the edge of the brackish water lakes formed by the sea entering the Wessex basin from the west; the holotype was found in such a location.

What did the Polacanthus eat?

This dinosaur was herbivorous, lived in forests, and is believed to have fed mainly on fruits and some tubers or low roots.

It had a strong jaw and was easy to crush hard vegetables.

It did not feed on tall vegetation as it could not lift its head more than one and a half meters off the ground.

Plants were probably bitten with a horn beak, cut by rows of small teeth and then swallowed to be digested by bacteria in the large abdominal cavity.

Polacanthus measured an estimated 4 meters long and weighed approximately 2 tons , but so far only the posterior parts of the post-cranial skeleton are known, and the part of a lower jaw is attributed to him.

Like all Ankylosaurs, he was protected by bony plates (osteoderms) in his body.

The most striking feature was a fused structure, similar to a shield over the pelvis, but there were also smaller, rounded bone plates and bone spines.

The exact arrangement of these structures is not known; the spines were probably distributed on the animal’s flanks.

With the intention of providing protection. The Polacanthus was quadruped and had a robust constitution with short and strong limbs.

The armor plates served as protection against predators, carnivorous theropods, for an animal that could not run fast.

Because of the hoof, the Polacanthus could press itself close to the surface of the earth, hoping that the armor and thorns would provide sufficient protection against the attacker.

The same flattening makes it difficult for the larger theropods to turn it around and leave it on its back to attack its abdomen.

A somewhat newer hypothesis suggests that the animal also actively defended itself.

This is indicated by the rigid tail that may have been driven by a specially enlarged motor nerve centre in the flared spinal canal of the pelvis.