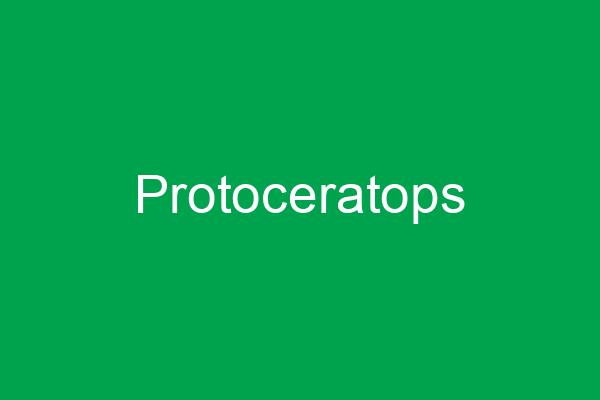 The Protoceratops was a genus of dinosaurs that inhabited our planet during the Jurassic period (about 75 million years ago). This genus has been classified within the group of protoceratopian dinosaurs.

This genus would have been the size of a sheep, since it was approximately between one and a half and two meters long. It is also worth noting that it did not weigh much, barely 60 kilograms.

The main characteristic of these dinosaurs was their horns, since they are among the first known to have horns. It is deduced that they would have lived in herds due to the huge amount of Protoceratops remains found together.

Do you want to know more? Here’s some great information about the Protoceratops – stay tuned and read on to find out all about this herbivorous dinosaur from the Cretaceous period!

Taxonomy of the Protoceratops

he taxonomic classification of this extinct animal can be broken down as follows:

This animal belongs to the entire group of dinosaurs that were the first to have horns in their structures, which is why it is quite interesting to study it in a detailed and fascinating way.

However, the horns that this animal possessed in its face, were not as developed as we imagine them mainly, in fact we could say that they were even incomplete, but they were presented in the same way, the curious thing is that other specimens of later eras did present these horns with much greater dimension.

The length of this specimen could not have been more than 200 centimeters, so it can also be deduced that its diet was based on the consumption of vegetables that it successfully extracted from the rough environment in which it lived, an environment that today we know as the country of Mongolia.
This specimen also showed a considerable size of the glue in the area where its neck was located, so that the most experienced scientists came to presume that it was a defense resource that the animal used in cases of alert.

Especially when an animal wanted to make it its food of the day, in addition, it is known that they also gave it a different use, that of demonstrating superiority to other specimens of its herd, and it even served as a structural part so that the bite of its jaw was much more powerful and aggressive.

In 1923, Granger and Gregory were in charge of informing the scientific community that this specimen was nothing more and nothing less than a close and direct relative of the famous Ceratopsians that inhabited the area that today we identify as North America.

After these two scientists, other paleontologists in search of glory and to contribute their grain of sand to the world of science, embarked on a research adventure, so their efforts yielded results and came to detect two additional species, one of which is identified as Protoceratops andrewsi, while the other is mostly known under the official name of Protoceratops hellenikorhinus.

Meanwhile, just 20 years into the 20th century, researcher Chapman Andrews was fortunate enough to locate a set of nests that held a number of eggs.

All this was carried out within the country of Mongolia, so later studies showed that they were in fact the same animal, however, this was a mistake that was later to be corrected and then assigned to a specimen identified as Oviraptor.

This specimen could have had a maximum length of almost 2 meters, being more exact, a total of 180 centimeters, while it could only reach 0.6 meters in height, weighing approximately 60 kilos.
The Protoceratops was probably an animal that liked to live protected by the herd, such behavior would explain many of the mysteries that exist to this day, this is presumed due to the discovery made in which numerous bone structures were found together.

This extinct specimen was a close relative of another dinosaur known or identified under the name of Leptoceratops, which turns out to be a being that also roamed the northern area of the American continent.

In this specimen, the differences in size were also common between males and females, so a scientist was in charge of studying such feature, a scientist identified as Peter Dodson, who managed to detect that the bony elements such as the parietal and scaly, located in the skull, were of different size if it was a male or a female, he also pointed out that age was an important detail that differentiates the hierarchy of the animal in the herd.

This ferocious animal must have had a rather terrible appearance, because without taking into account that its size was not so considerable, its skull was covered by a strange plate of solid and resistant quality that it probably used to attack its most terrible opponents, in addition it presented in the area of its snout a structure similar to that of a beak, which was quite sharp in case the time or opportunity came to have to make cuts to a certain target.

As for his tail, it was long enough and had the quality of being robust, which probably gave him the option of being used to knock down opponents.
After doing the intense and careful work of reconstructing all the bone structure of this specimen, we can finally prove in a scientific way that this animal used its four extremities to be able to move from one place to another if it was needed.

As we have mentioned in previous paragraphs, the dark and striking plate that this animal possessed was probably also used for the typical courtship rituals, in which only the best specimens were selected by the females to be able to reach the reproduction process.

So it can be presumed that they were a resource that could be used very frequently to carry out the objective of looking for food or detecting animals that threatened their already complicated life. In addition, it had a depression known as fenestra, right in the back area of where this ocular element was located.