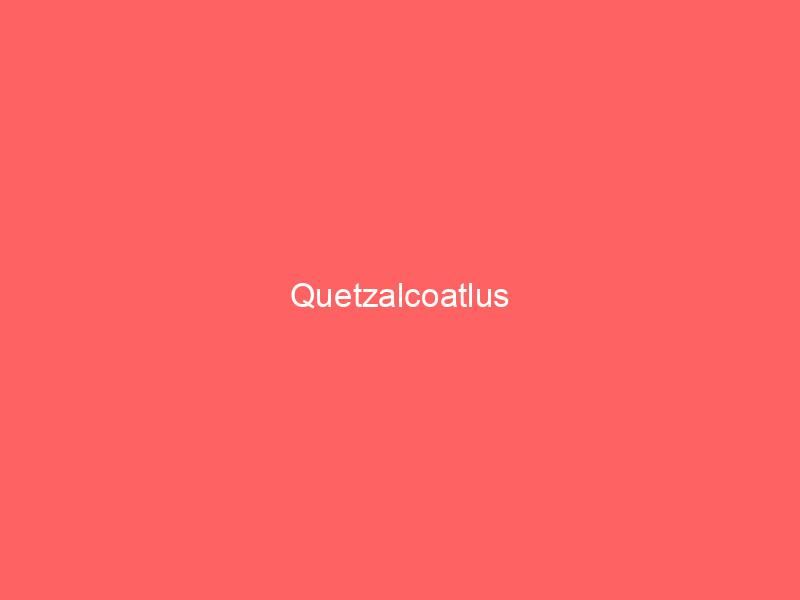 The Quetzalcoatlus was a genus of flying reptiles that inhabited our planet during the Cretaceous period (about 68 million years ago to be precise). It is classified within the group of pterodactyloid reptiles.

This genus would have cohabited with the dinosaurs, although it is not considered one of them. Its appearance would have been compared to that of a feathered snake.

The dimensions of the Quetzalcoatlus were quite large. It was about 11 meters long and weighed between 70 and 200 kilograms.

Are you looking for more information about the Quetzalcoatlus? Then read on and… Find out all about this peculiar extinct flying reptile!

What does the name Quetzalcoatlus mean

The first remains of this animal were found in Texas, more precisely in the javelin formation located in Big Bend National Park. By geology student Douglas A. Lawson in 1971. These fossil remains were only of a not complete wing, which served to get an idea of the size of this reptile.

Later, Lawson himself would discover other specimens in the same place. Thus allowing to know a little more about the already mentioned creature. Digging up three fossil findings of smaller specimens compared to the holotype.

These fossils found were four somewhat complete skulls and partial skeletons. These being more complete than the first fossil found. These findings were described by Lawson and Professor Winn Lagston Jr. in 1975.

They named the first species as Quetzalcoatlus northropi. The specific epithet is northropi in honor of John Knudsen Northrop, who is the founder of the company Northrop, which designed tailless aircraft very similar to the morphology of the Quetzalcoatlus.

On the other hand, focusing a little more on the remains found after the holotype, it was believed that because of their small size they were juvenile forms of this genus.

However, with the discovery of more fossil remains, it was affirmed that the most probable is that it was another species of Quetzalcoatlus, calling this second species (the smallest) as Quetzalcoatlus sp, a name that was coined by researchers Alexander Kellner and Langston in 1996.

Later in 1995, an almost complete skeleton was discovered in the Dinosaur Provincial Park. In this discovery, the remains of a Saurornitholestes were also found, which probably fed on the dead body of the Quetzalcoatlus.

It lived about 67 million years ago in the Upper Cretaceous, in North America to be exact, although it is not ruled out that it lived in other continents or regions.

Its habitat was characterized by a swamp, so it is believed that it fed on fish and other species characteristic of that habitat.

Regarding the feeding of the Quetzalcoatlus there are many scattered opinions. As mentioned before, living near swamps, it is most likely that it fed on fish and crustaceans in the area. However, others point out that it was totally a scavenger and fed on dead dinosaurs.

The Quetzalcoatlus, is considered the largest flying reptile of all time. It had two very pronounced and pointed wings that gave it more speed in flight.

The height of this giant reptile is quite controversial because there are opinions of all kinds. This is due to the fact that they found a fossil of the Quetzalcoatlus that measured about 15 meters, although after several agreements between the scientists they agreed that the general measurement was between 10 and 11 meters.

As for its weight, it was verified by a study that could probably reach weights of between 200 and 250 kilograms. Being this relatively small weight in comparison with its size, it is possible that this weight made it easier to rise through the skies in spite of its enormous shape.

As for its skull, it was characterized by an elongated, thin and straight beak. In addition, it had a crest that probably served as a sexual or maturity differentiator.

It had a long and agile neck, made up of a large number of vertebrae, its body was relatively small and it fitted entirely into the folds of its wings as if it were a bat. These folds were connected in both the upper and lower extremities. Passing over the entire back, giving it complete flight control and more agility.

As to how this enormous prehistoric flying animal could soar through the skies, there are many scattered opinions, some suggesting that it ran at great speed with the help of its legs, until it reached great speed and rose with the help of strong air currents. On the other hand, many maintain that it dropped from high points and took advantage of the air currents and the power of its wings to rise up through the skies.

He was not an aggressive or territorial animal. Despite its size, it fed on small fish or, failing that, on dead animals. Which did not represent a great effort for him.

In one of the fossil remains found of the Quetzalcoatlus, a fossil of Saurornitholestes was also found, however, it is ruled out that this was its predator. The difference in size and strength is vastly different.

As for mating, it has been determined that only the males had crests like the Tapejara, the Quetzalcoatlus being smaller. These crests were used to attract the females, as if they were a peacock. Being these same symbols of virility, beauty and power, they showed the female with the purpose of courting her.

Once they were mated, the female took care of the eggs and later the young, until they were in a more independent age.

Some curiosities about the Quetzalcoatlus