The genus Saichania is a genus of ankylosáurid ornitisch dinosaurs that lived in the Late Cretaceous Period.

Belonging to the ankylosáurids, this dinosaur is characterized by a large dorsal armor, but also a tail that ended in the form of a mace and protruding spines of the aforementioned armor.

The Saichania is one of the dinosaurs that most attracts the attention of children. Such is the attraction of these to this dinosaur that hundreds of dolls have even been made with its shape. Want to know more about him? Well, keep reading.

The Saichania is a genus of dinosaur that has only one species within it. This is Saichania chulsanensis, which lived in the Cretaceous period 80 million years ago in the lands now occupied by the Asian continent, specifically in today’s Mongolia.

This genus is part of the ornithisch order, within the family of the ankylosaurids and was characterized as one of the most powerful dinosaurs thanks to the armor that protected its body.

Unlike other dinosaurs in which this armor only served to protect the upper part of the body, the Saichanian armor also provided protection in the central part. In addition, it had thorns from behind its head to its tail, which ended in a large club that it used to attack and defend itself from its enemies.

It was approximately 7 meters long, 2.2 meters high and weighed just over 2 tons. Another outstanding characteristic of this dinosaur was the strength of its jaw, which allowed it to eat very hard plants, because contrary to what it might seem from its appearance, the Saichania was a boiling dinosaur.

The first remains of Saichania were discovered in the Gobi Desert in southern Mongolia by paleontologist Teresa Maryanska in 1977. In that excavation, not only were a skull, a jawbone and part of a Saichanian armor found, but also the remains of another dinosaur of the same family: the Tarchia.

The name Saichania means “beautiful“. However, it was not named precisely because it was a beautiful looking dinosaur but because when the remains were found they were very well preserved and all the paleontologists present did not hesitate to say that they were the most beautiful remains they had ever found. 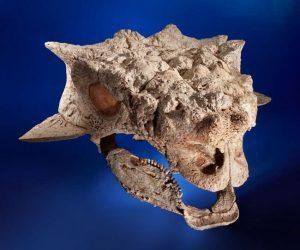 As we have mentioned the first remains of the Saichania were found in the same excavation as those of the Tarchia. The truth is that apparently both dinosaurs are the same or at least very similar and that is why there is confusion between them. That’s why we’re going to see what their differences are.

To begin with, the Tarchia is much larger, reaching a length of 8.5 meters and much heavier, as all the findings suggest that it weighed more than 4.5 tonnes.

Another of their main differences is found in their skulls. While the skull of the Saichania was constructed in a very solid way, with several plates acting as shields, the skull of the Tarchia, besides having a wider base, was more unprotected.