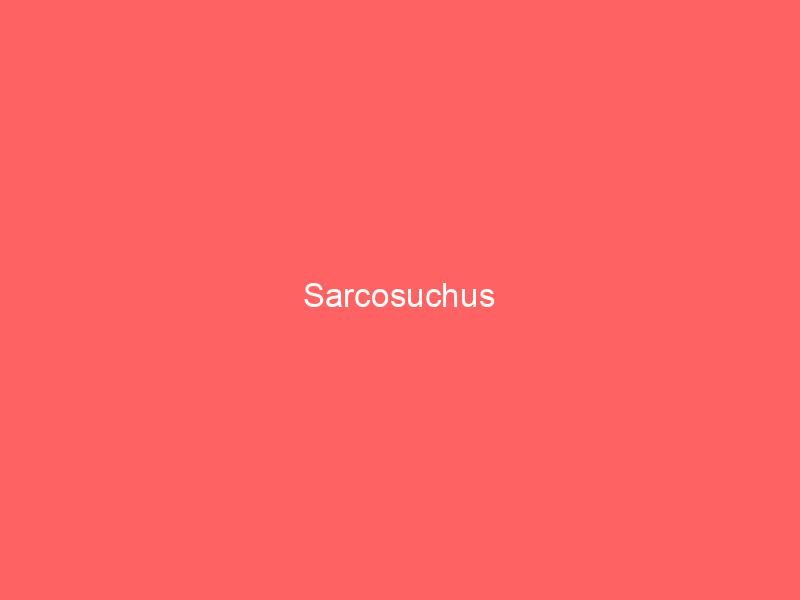 The genus Sarcosuchus includes a series of crocodile reptiles that existed alongside the dinosaurs during the Cretaceous Period, approximately 112 million years ago. The remains have been found in Africa and South America, when in the Cretaceous period they were still together in Pangaea.

This genus of crocodiles had nothing to envy to the great dinosaurs with which it lived, since it became one of the biggest crocodiles and predators that have existed on Earth.

Sarcosuchus belongs to the Class of Sauropes, Superorder of Crocodrylomorpha and family of polysaurids (Pholidosauridae). So far, fossils of two species, Sarcosuchus imperator and S. hartti, have been found.

The first fossils of these animals were found in Brazil by Canadian naturalist Charles Hartt. They were two fossilized teeth, which he sent to the paleontologist Othniel C. Marsh (the one from the War of the Bones). Marsh classified them as belonging to a new species, the already known Gonhipolois. It was not until 1977 that these teeth were discovered to belong to a new species, which was duly named S. hartti.

Between 1946 and 1954, the Frenchman Albert-Félix de Lapparent found several crocodyliform fossils in North Africa. There were teeth, skull fragments and vertebrae that helped to distinguish a new species. In 1964, another French team found another, almost complete, skull in northern Niger. Two years later, the French named the new species Sarcosuchus imperator, from the Greek sarchos, meat, and suchus, crocodile.

At the end of the 20th century, the palaeontologist from the University of Chicago, Paul Sereno, excavated numerous skulls and skeletons of S. imperator also in Niger.

The largest modern crocodile, the saltwater crocodile, can reach up to 7 meters, although they usually do not exceed 6 m. Sarcosuchus used to be over 10 metres long, and it is believed that they used to reach 12 metres. Only the jaw could reach three meters, a super crocodile.

One hundred million years later, a large, old specimen of the saltwater crocodile, Crocodylus porosus, can weigh a ton. Sarcosuchus could weigh as much as eight tonnes. That said, a monster.

Of course, Sarcosuchus lived in an age of titans, a time when the characteristics of the atmosphere and the lack of predators allowed living beings to reach dimensions rarely seen in our era. The fact that there were also giant herbivores helped carnivores like Sarcosuchus to find abundant food. And since a picture says more than a thousand words, I leave you with this wikipedia chart comparing Sarcosuchus to other crocodiles, and to human beings.

There’s no way you’d want to run into this prehistoric crocodile. Not only was it extremely dangerous, it was uglier than a pair of infected tonsils. In addition to the already unpleasant appearance of any reptile, Sarcosuchus had a horn that could well be described as deformed.

The upper part was larger than the lower, so that when the mouth was closed there was always a stretch left uncovered. It was as if both sections belonged to different animals.

Some of the teeth found in sarcosuchus are as much as 15 centimeters long as those of a T. rex. To the size we add the amount, more than 100 of them between the upper and lower jaw. An unmitigated death bite. I don’t even want to imagine it.

To top it all off, Sarcosuchus had a bulge in his tube, that is, a kind of blister or bladder, something like a big wart on the tip of his nose. What it was for, we’re not sure. Some scientists believe it could be an olfactory amplifier; others suggest that it might have a vocalization function.

Sarcosuchus’ tube was not only ugly, it prevented him from performing the “death twist. Have you ever seen how a crocodile, once it has caught its prey in its teeth, starts to spin on its own axis? It does this to tear the animal’s tissues and rip its limbs apart.

Well, Sarcosuchus’ snout was so thin that it couldn’t have done the “spin of death”, because it could be broken.

Still, it is believed that Sarcosuchus could well hunt the many dinosaurs in his habitat and time.

And while we’re at it, let’s talk about where these giant bugs lived. According to the data known so far, each of the two known species of Sarcosuchus lived in one area: S. imperator in Africa, and S. hartti in South America.

Although the area in which the fossils found in Africa is now the Sahara desert, 100 million years ago, it was a river plain. Where it’s all sand now, it used to be a jungle.

Like many modern crocodile species, Sarcosuchus preferred rivers to salt water. So he could vary his diet between fish, and the dinosaurs that came ashore to drink. Not unlike what tourists can now see on the banks of the Congo, or even the Nile.

The surprising and treacherous attack of a crocodile on a zebra, is one of the most descriptive shows we can see in nature.

And did this giant prehistoric crocodile have no predators?

It probably did, but not many. Our friend the prehistoric crocodile was not only big and ferocious, but well protected. Most of his body was protected by osteoderms, the bony plates that serve as skin for many reptiles, and which are very difficult to break.

Not long ago we talked about osteoderms in the article dedicated to Ankylosaurus, take a look at it too.

There is one point that I think is worth discussing. It is a question that is sometimes asked by my students, and friends. Why have crocodiles changed so little over hundreds of millions of years? The answer lies in evolution, and what drives it.

We know well that an animal, or a plant, evolves through slight physical changes caused by sexual reproduction or mutations.

These changes are perpetuated when the new characteristics represent an advantage for the animal. When these adaptations help a specimen adapt better to a particular environment, that animal has a better chance of reproducing and passing on those characteristics to the next generation.

To make a long story short, if crocodiles have not evolved much in 200 years, it is because they have since become a very effective killing machine. Little can be improved now, unless their environment changes.

Of all the living reptiles we can find today, crocodiles are the ones that have changed the least with their ancestors, more than 70 million years ago. Within the crocodile family, five types can be distinguished:

There are some details of the giant prehistoric crocodile that are worth mentioning:

So, there you have it, the giant prehistoric crocodile, Sarcosuchus. One more bug in a collection of ferocious creatures from the past that I’d rather not have met. An extinct species, which is better off in a museum than in our rivers. It wouldn’t be the first giant crocodile or the last, but it would be the most fearsome of all.