The dinosaur in a helmet

Let’s learn a little more about this strange dinosaur that had a large bump on its skull, which it most likely used to fight with, or not, read on to find out.

What does the name Stegoceras mean?

The name derives from the Greek word “stegos” which are understood as ‘roof’ and keras which means ‘horn’.

The first known fossil remains were some cranial fragments, until 1924 when a complete skeleton of Stegoceras validum was discovered.

This skeleton was described by the American paleontologist Charles W. Gilmore.

This fossil showed that the bony domes of this animal previously discovered corresponded to the front of its skull.

Gilmore believes that the teeth of this Stegoceras are very similar to those of a small theropod called Troodon.

And consequently he renamed Stegoceras validum as Troodon validum, Stegoceras being a synonym of Troodon.

This attribution to the genus Troodon was abandoned in 1945 when the most complete fossil remains of this animal were described.

The American paleontologist Charles M. Sternberg then demonstrated that the Troodon was a theropod, while the Stegoceras was a genus cataloged in a new family, called Pachycephalosauridae.

Several other species later joined the genus Stegoceras, but eventually emerged to be assigned to other genera or considered as junior synonyms of the existing genera.

Only another species of Stegoceras novomexicanum, described in 2011, is attributed to the genus.

However, this affiliation is still widely debated among paleontologists. In 2016, Williamson and Brusatte consider the fossils to be those of the young Stegoceras validum.

In the same year, the discoverers of the species maintained their attribution by recognizing that they were young adults, but emphasizing other species-specific characteristics and considering that certain morphologies within the species were linked to heterosynchronous phenomena.

When did the Stegoceras live?

Stegoceras comes from the Upper Cretaceous (late Campanian and Maastricht) and at an age of about 76 to 66 million years.

As far as the place where he lived, the dinosaur park formation (Canada), was a place of low relief, rich in rivers, alluvial plains that if they flooded easily, even became swampy depending on the climate.

The climate in this area was warm, with temperature variations depending on the humidity that was sometimes low and sometimes high.

The most abundant plants in the area were undoubtedly the conifers, with an understory of ferns. 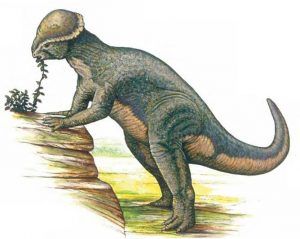 Because of this formation was a place rich in herbivorous dinosaurs such as the Centrosaurus, Styracosaurus and Chasmosaurus, the hadrosaur Prosaurolophus, Lambeosaurus, Gryposaurus, Corythosaurus and Parasaurolophus, and the ankylosaurus Edmontonia and Euoplocephalus.

And of course, since there were so many herbivorous animals, it was normal to find predators such as the Gorgosaurus and Daspletosaurus, which were the most dominant in the area.

What did the Stegoceras eat?

As far as the diet of this dinosaur is concerned, no confirmation has yet been reached.

Based on the characteristics of their teeth, which were very small and grooved, they could not have chewed hard, fibrous plants as effectively as other dinosaurs of the same period.

Their sharp, serrated teeth were supposed to be ideal for a mixed diet of leaves, seeds, fruits, and insects.

Stegoceras may have had a completely herbivorous diet, as dental crowns were similar to those of iguanid lizards.

The occipital region of Stegoceras was well demarcated for muscular union and it is believed that the movement of the jaw of the Stegoceras and other pachycephalosaurs was mainly limited to upward and downward movements with the only slight ability for jaw rotation.

This is based on the jaw structure and the wear facets of the teeth indicate that the bite force was used more for shearing than for grinding.

The Stegoceras is one of the best-preserved pachycephalosaurus, in addition to a complete skull and dozens of isolated cranial fragments, parts of the skeleton are also known. 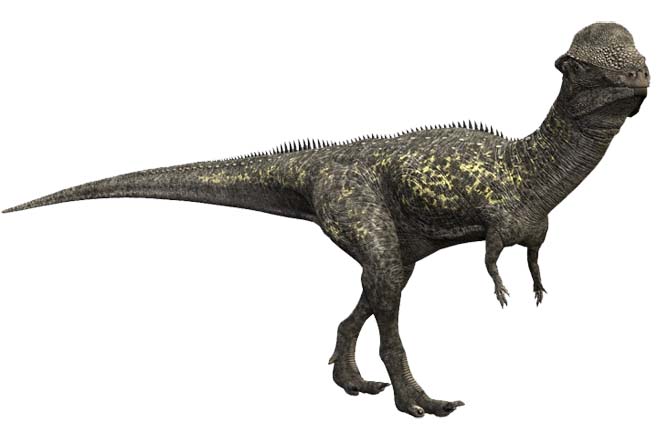 This dinosaur was a medium-sized representative of his group, reaching up to 3 meters long and an estimated weight of 35 kilograms.

As with all pachycephalosaurids, the skull on top was thicker.

The forehead and parietal bone fused and arched to form the frontoparietal, the cranial windows of the temporal region were smaller.

Like all Pachycephalosaurs, Stegoceras had different types of teeth (heterodontics).

In the anterior part of the upper jaw were several slightly curved, pointed teeth, behind which was a hole called a diastema.

The jaws were relatively small and had triangular, slightly toothed crowns.

The teeth of the lower jaw resemble those of the upper jaw.

The structure of the teeth suggests a predominantly plant-based diet, although the function of the different types of teeth is not exactly clear.

Maybe they supplemented their diet with insects.

The hind legs were clearly longer than the front legs, the Stegoceras were bipedal.

The pelvis was wide, as in all pachycephalosaurids, the tail was rigid because of the ossified tendons.