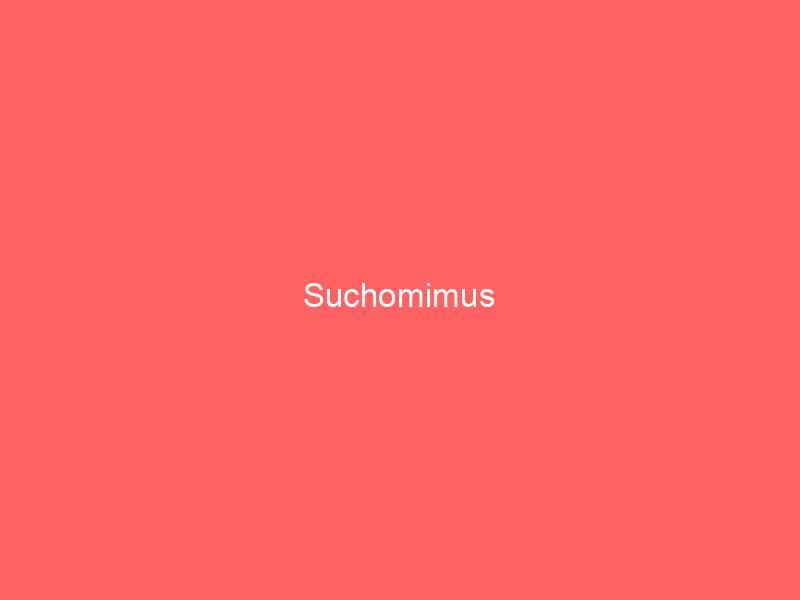 The Suchomimus tenerensis is the only species that has been found in the genus Suchomimus. It is an incredible species of spinosaur dinosaur. This extinct species was on our planet many years ago, what we now know as the age of the dinosaurs.

The main feature of the Suchomimus was its huge mouth very similar to that of today’s crocodiles. This spectacular dinosaur was not only fierce looking, it was fierce looking. The huge size that it had made it one of the dominant dinosaurs of its entire era and it would have been in control of its entire area.

Basic information about the Suchomimus

The Suchomimus was a fairly large dinosaur and would have inhabited the mainland. It was a fairly intelligent spinosaur and above all it was a very bold carnivorous animal. With its crocodile mouth it would have frightened all its neighbours. This impressive dinosaur holds the title of being one of the largest theropods known.

The taxonomy of the Suchomimus

Within the genus Suchomimus only one species has been found, S. tenerensis. It is possible that the quantity of species of this genre increases in case that new finds take place, for that reason we will maintain this section totally updated.

The Suchomimus belongs to the spinosaur dinosaur family. To know more about this genus of dinosaur, we must know a little about the general characteristics. To do so, let’s look at the characteristic features and information about spinosaurs.

The first species of this family would have inhabited for the first time in the Late Jurassic. This would be about 155 million years in the past. There are many remains of this dinosaur dating back to the Late Jurassic and extending through the Early Cretaceous and by the early Late Cretaceous not many more would have been found.

The spinosaurs were large dinosaurs. Those belonging to this family were predatory animals, and for this purpose they had a large and very elongated skull that closely resembled that of a modern-day crocodile. Inside its mouth were cone-shaped teeth and in some cases slightly serrated.

The skulls they possessed were different from those of other predatory dinosaurs such as Tyrannosaurus or Allosaurus. In the latter two cases they had quite large jaws, both in width and height, while the spinosaurs had thin and narrow jaws.

From this conclusion, it can be assumed that the Spinosaurus would not have attacked large prey as other predators did.

One of their most characteristic features is the sails that protruded from the different species located on their backs. The specific function of this sail is not known, although different theories are being considered.

Why were they called spinosaurids?

This family of dinosaurs was named in 1915 by Mr. Ernst Stromer. At the time he named the family, there was only one genus, the Spinosaurus. But it is not until 1998 that a complete description is given by Paul Sereno and he adds the subfamily Spinosaurinae. From there, new genera arrived to increase the members of the spinosaur family.

As we indicated, one of their characteristic features is the candles they had on their backs. This has given the name to this family called Spinosauridae. The meaning of the word is related to it and would come to mean “spinal column lizard”.

Description of the Suchomimus

Here, we already have a general idea about the features and characteristics of our dinosaur. It shares many characteristics with the spinosaurids, as it belongs to that family, although it obviously has slight differences that differentiate it from the rest of the genera. Let’s see now about the characteristics and features of the Suchomimus.

The dimensions of this genus are really big, it has a length of 10 to 11 meters approximately. This together with the height of about 3 meters that it has, makes it one of the largest spinosaur dinosaurs. Given its large proportions, it also has a great weight, ranging from 2500 to 5000 kilograms.

The characteristic feature of the Suchomimus was its very long and narrow snout. The jaws of those belonging to this genus were very narrow and had more than 100 teeth. The teeth they possessed were not very sharp and they curved backwards.

However, the teeth that were at the tip of the muzzle were more pointed and elongated than the rest. In numbers, they had about 22 teeth on each side at the top, and about 32 on the sides of the lower jaw. In the central part, where their teeth were sharper, they would have had about 7 at the top and another 7 at the bottom.

Suchomimus had a skull very similar to that of crocodiles. The nostrils of these extinct animals were long, narrow and arranged horizontally. The neck of this dinosaur was very muscular due to its short length. Our friend had about 16 vertebrae in his back. In its hands it would have large elongated claws which it adopts from the spinosaurs.

With respect to its cousins, it bears a great resemblance to Baryonyx and Spinosaurus. The Suchomimus is the intermediate between the two, somewhat larger than the Baryonyx and somewhat smaller than the Spinosaurus. It is in its larger cousin (Spinosaurus) from whom it would have taken the characteristic of having a large neural spine protruding from the body.

Why were they called Suchomimus?

In 1997, paleontologist Paul Sereno and his team made a new discovery. In the area of the Sahara, near the Tener desert in Nigeria, they found some fossils that they would finally name Suchomimus.

The meaning of this word is crocodile imitator and it was given in reference to the shape of its head. There is only one species currently found, the Suchomimus tenerensis which is named after the place of its discovery.

When did the Suchomimus live?

Dinosaurs are animals that inhabited our planet many years ago. More than one of us would have liked to see them in their full glory, although most probably these dinosaurs would have been a great threat to humans.

Human beings never came to cohabit with dinosaurs, as our species only appeared about 200,000 years ago in the past while dinosaurs became extinct more than 55 million years ago.

This time we are talking about the Suchomimus, a genus of spinosaur dinosaur that first appeared on the planet about 121 million years ago. They were on our Earth for about 8 million years, that is, our planet last saw them about 113 million years ago in the past.

The period of time they were on Earth coincides with the middle of the Lower Cretaceous Mesozoic Aptien and their existence on the planet ends with the Albienian Age, which is the age that precedes the Aptienian Age. The Aptian Age began about 125 million years ago and ended about 113 million years ago, coinciding with the passage of the Suchomimus through the planet.

Where did the Suchomimus live?

The Suchomimus inhabited the area where today’s Nigeria is located. This is because the only remains of Suchomimus were found in that area. In any case, they could have inhabited many more areas and they simply have not been found there yet.

The world is too big and there are many places where it has not yet been excavated and it is very difficult to do so (deep under houses, buildings and all kinds of constructions or in areas where it has simply not been investigated).

If we had to put our hand in the fire with an answer it would obviously be Nigeria. Still, as we mentioned it could be anywhere else. In fact, if we look at other genera of spinosaurids, they have been discovered all over the continents, more specifically in South America, Europe, Africa, Australia and Asia.

The preferred habitat of this dinosaur would have been the semi-aquatic areas, like today’s crocodiles which are amphibious animals. These areas could be some river deltas or the typical lagoons that existed in Africa at the beginning of the Cretaceous.

What did our friends feed on?

As indicated, the preferred environment of this specimen was the areas where there was both land and water. Therefore, it can be deduced that it would have fed on fish as its main food. Even so, fish would not have been its only food; in other genera of spinosaurs of which more remains have been found, we can see remains of the flesh of other dinosaurs. So we could say that the Suchomimus fed on fish and dinosaurs.

This is contrasted with the long snout that it possessed, besides some thin and elongated teeth that are suitable for the fishing. The jaws of this genus would have been perfect for catching slippery prey such as fish.

As for the dinosaurs, it is not known specifically if they would have been hunted by themselves or if they were scavengers, that is, if they fed on the remains left by other hunters such as the Allosaurus.

It is also important to point out that their teeth would have been more suitable to capture possible dinosaurs than to kill them. Another theory is that the Suchomimus would have captured small ornithopod dinosaurs thanks to their inwardly curved teeth and then had them trapped there while tearing them apart with the large claws they had in their hands.