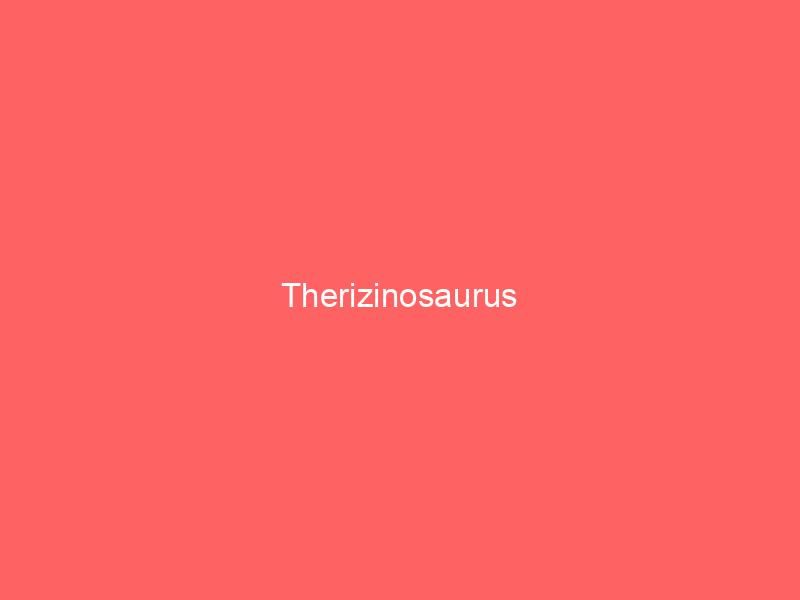 The Therizinosasurus was a genus of dinosaurs that inhabited our planet during the Cretaceous period (approximately 68 million years ago). This genus has been classified within the group of the Celurosaurian Tericinosaurid dinosaurs.

It is difficult to define what this genus would have looked like since not many fossils have been found about it. However, it is clear that it had large claws.

According to estimates based on the remains that have been found of the Therizinosaurus, it could have measured no less than 12 meters in length and in terms of weight, it would have been no less than 6 tons.

Did you find this information about the Therizinosaurus interesting? Then read on to find out all about this omnivorous dinosaur from the Cretaceous period!

What does the name Therizinosaurus mean?

The meaning of the name Therizinosaurus is “The Scythe Lizard”, this name comes from the Greek word “θερίζω” (therízo) which means “to cut or mow” and the word “σαυρος” which means “lizard”. This name was given to it because of its huge claws. It is part of the suborder of theropods, which still exist today and are known as birds.

Where, how and who discovered it?

The Therizinosaurus is one of the most characteristic representatives of the Therizinosauridae group. Few fossils of this dinosaur are available. In fact, there are only huge claws and some limbs.

The first discovery of this dinosaur was not very extensive since it only consisted of one claw, which was discovered in 1948 in a Soviet fossil expedition in southwest Mongolia. In 1954 researcher Evgeny A. Meleev described this claw as the ribs of what would be a prehistoric turtle, not knowing that it was a dinosaur.

Later there would be a second discovery, which would shed more light on this clawed dinosaur. The aforementioned finding consisted of teeth, parts of extremities, another claw and also a paw similar to that of theropods.

This allowed us to deduce that it was not a turtle as it was argued in 1954, but a totally new dinosaur. This finding was described in 1976 by Rinchen Barsbold, who would call them Therizinosaurus.

In another finding, the first parts of the hind limbs were found, it was described in 1982 by Atlangerel Perla.

Due to the little evidence, it was really complicated for paleontologists to classify such dinosaur, however, due to its characteristic leg and its kinship with the dinosaurs Erlikosaurus and Segnosaurus. It is definitely concluded that this one was part of the theropods.

Some researchers thought that they were the descendants of the Sauropodomorpha. But new discoveries, like the one of the Alxasaurus in 1993 and of the Beipiaosaurus in 1996, revealed important details, which allowed the classification of this dinosaur in the thericinosaur family together with the Segnosaurus.

It lived in the upper Cretaceous approximately 68 million years ago, many of its fossil findings were made in Asia so it is believed that it generally inhabited the so-called Nemegt Formation.

Its habitat is thought to be rich in wildlife and to have shared territory with other dinosaurs such as the theropod Adasaurus, Avimimus, Conchoraptor, Alioramus, Deinocheirus, Gallimus and Tarbosaurus.

What did he eat?

It is difficult to reach a conclusion about the eating habits of these dinosaurs, since no skull has been found so far.

Several researchers believe that Therizinosaurus like Erlikosaurus, ate plants, on the other hand based on the fact that it belonged to the theropod family. It is believed that it could have fed on meat, as this family generally fed on meat.

On the other hand it is also believed that it could have been omnivorous, this is based on the finding of a fossil of Erlikosaurus (a very close relative of the Therizinosaurus) in very good condition, which shed more light on the shape of the skull of the therizinosaurus and its possible eating habits.

Although there are no complete remains of this species, some characteristics of it can be deduced, for example, a Therizinosaurus could measure up to 12 meters long and weigh 6 tons.

Physically, it is believed that it had a long neck, a small skull and a somewhat thick and wide torso. It was bipedal, a characteristic that was easily evidenced because it had large claws that did not allow it to walk on four legs.

The Therizinosaurus had three claws in each hand, these could be up to half a meter long and were very sharp. The function of these claws leaves many possibilities open, for example; it is believed that they were used as weapons either to defend themselves from predators or to defend themselves from other males of the same species. He was even able to use them to cut or reach the branches on which he fed most easily.

It should be clarified that this is one of the most enigmatic dinosaurs that exists, there is so little information about it that at this point we still don’t know for sure what its eating habits or customs were.

It is even thought that it could have been a carnivore and hunted small prey within its territory, helped by its enormous claws, on the other hand it is believed that it used those claws to make its way through the fodder and reach branches.

As for predators. It’s likely that most of them kept their distance because of their scythes. It is also believed that these claws were used to confront others of the same species either for territory or for the opportunity to mate with a female in heat.

Some curiosities about the Therizinosaurus

In one of the episodes of the TV series “Walking among Dinosaurs” therizinosaurus appeared and looked very realistic, even though it had no feathers.

The Therizinosaurus entered the Guinness Book of Records for two reasons: firstly, it had the longest nails that have been found, and secondly, it was recognized as the strangest of dinosaurs.