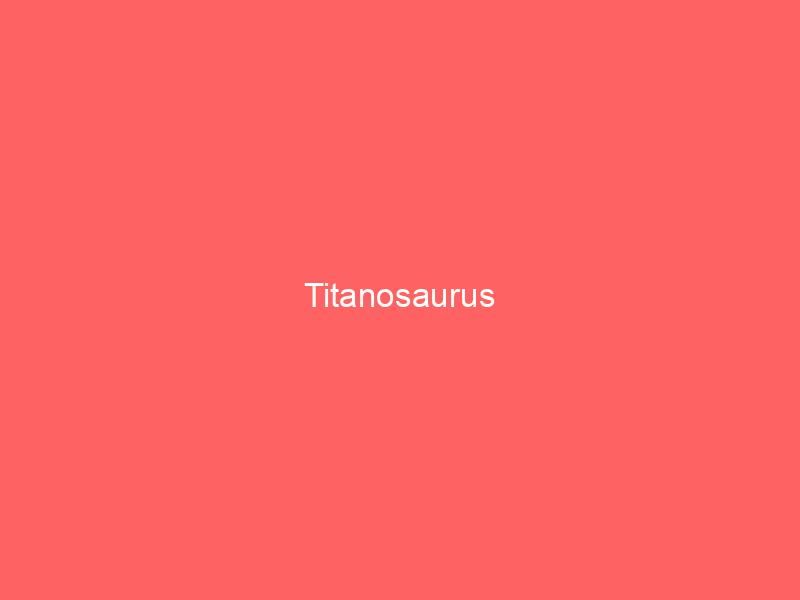 The genus Titanosaurus is a genus of saurischian dinosaurs sauropodomorphs titanosaurids that lived approximately 70 million years ago, at the end of the Upper Cretaceous Period.

As we can assume, the name Titanosaurus comes to mean “titanic reptile”, a name attributed by Richard Lydekker in 1887.

Here we have the most complete information about the Titanosaurus in the whole network, read on and find out everything about this herbivorous dinosaur from the Cretaceous period!

This species of animal has the following scientific classification:

This specimen inhabited our planet during the Cretaceous period, found in Querétaro, in the country of Mexico.

This specimen preserved a very complex dental structure, whose elements enjoyed the pencil shape, characteristic of the Titanosaurus in common with Saltasaurus.

On the other hand, showed a series of plates, which were in the skin, its length was close to 12 meters, while its weight reached 13 tons.

Discovery of the Titanosaurus

The famous plaques mentioned above caused this animal to be confused with another specimen of similar characteristics. It was thought at first that it was a specimen of Nodosaurus (a type of Cretaceous ankylosaurid), because the defensive structure of this animal was composed of such plaques.

However, after the discovery of other individuals in other parts of the world (especially the discoveries in South America), this specimen was classified in a much more appropriate way, while scientists managed to retract the great mistake they had made years before.

They came to presume correctly that these plates were strategically distributed all over the back of the animal, a rather interesting quality that assimilated even more to the specimen we mentioned, the Saltasaurus.

At first only a set of bone elements were available that were in an undesirable state, bones belonging to the extremities of that individual and a few vertebrae, but in a very poor state of conservation.

However, as we have already explained, due to the new efforts made in new expeditions, new remains were found which, besides being in a much more desirable state of conservation, were also more numerous, so that it could be observed at the end that many of the qualities that the Titanosaurus presented were also common in other specimens of its time.

However, the scientific community still considers this great specimen as a dubious individual, because it has not yet been placed in a systematic classification, all because this specimen still does not show clear and evident differences from other specimens that have been studied throughout history, All this has led to a collective confusion in the world of Paleontology, so that the group of Titanosaurus is now a “tailor’s box” where species very similar to each other and to other specimens of the family to which they belong are introduced, but with peculiarities that prevent their inclusion in other taxonomic genera.

Just by saying that there have been a great number of species that have been named within the Titanosaurus, but that with the passage of time the same ones who made such a statement retracted it because they were wrong, we can know the degree of uncertainty and confusion that exists about the knowledge of the dinosaur protagonist of this article.

Even the species that has been most studied and analyzed of the famous Titanosaurus, is a specimen that received the official denomination of Titanosaurus colberti, which also was not free of doubts and criticisms, and the same that later was assigned a new denomination, that of Isisaurus.

In the same way, Lydekker has been in charge of interpreting a series of rather poorly preserved remains, which do not give enough security to be able to draw clear conclusions.

Therefore, we hope that soon Paleontology will again offer us a pleasant surprise by giving us more details about the mysterious Titanosaurus.

The dinosaur in our culture

On the other hand, in our famous culture today, we can see that in a film production called “Terror of Mechagodzilla”, there appears a being that lives in the water and appears to be a dinosaur, which is called Titanosaurus, this film was released very successfully in 1975, getting a fairly decent reception among the public of those years.