The most powerful dinosaur of the Cretaceous 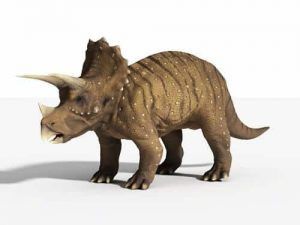 Let’s talk about one of the most famous and emblematic dinosaurs of all times: the Triceratops.

Known all over the world when we talk about “dinosaurs” as one of the most famous that ever existed.

The Triceratops is a genus that encompasses at least two species of Ceratopian ornitisks that lived at the end of the Cretaceous period, in the current North America, so they were in the Laurasia continent.

Let’s go back for a moment to the Cretaceous period and get to know it in depth.

From the Triceratops, its three large horns that appear on the head stand out, hence its name. Although this aspect is well known for practically all the way, in a similar way to how everybody knows the great claw of the Velociraptor or the small arms of the Tyrannosaurus, the Triceratops has suffered different changes, just like both theropods, throughout history from its first finding until today.

Anatomy and morphology of the Triceratops

Although a complete skeleton of Triceratops has not yet been discovered, enough remains have been discovered since its first discovery in 1887 in North America to be sure that there are at least two species: Triceratops horridus and Triceratops prorsus, although their characteristics are summarized under the name Triceratops, because the differences are very specific.

The Triceratops is estimated to be about 9 meters long, and to reach a height of up to 4 meters. The Triceratops is well known for its 3 horns, one of them in the muzzle pointing upwards and two of them very long and totally solid, reaching more than a meter and a half in length, one over each eye.

Another representative aspect of the Triceratops is the bony wheel that comes out of the skull towards the back. On this bone wheel or crown, sometimes a series of pointed bones called occipitals have appeared, which could have been larger in males for the attraction of the opposite sex.

The Triceratops was a quadruped that is estimated to have weighed between 6 and 12 tons. This weight could be moved with some ease due to strong and muscular legs. The front legs had 5 hooves while the hind legs had only 4, a pattern quite well preserved among the Ceratopsians.

This change has not had any impact on how they ate and other activities studied, simply a more current representation.

Next to the legs there was another great discovery. Unlike other quadrupeds such as sauropods or ankylosaurs, the hind legs of the Triceratops and all ceratopsians were longer than the front ones, which means that the ancestor of the ceratopsians was a bipedal, non-quadruped dinosaur.

In addition, the structure of the forelegs shows a different shape than the hind legs, indicating that originally their function was other than supporting the body mass.

Although both subfamilies fall under the description of ceratopsians, they have a number of differences.

The first and clearest difference is in the number of horns they possess. The subfamily Chasmosurinae has 3 horns in its skull, while the subfamily Centrosaurinae has only one or even this may not appear as such but as a large lump.

In a recent discovery of Triceratops remains, a series of prints were found that revealed the presence of fibres in the extinct species. These fibres have been found, at least, from the hip to the end of the tail, but they did not cover the whole tail but were only found in one dorsal region, forming a row of fibres.

These fibres may look like feathers, but it has not been confirmed that they are such. They are long fibers that may not be related to thermoregulation but to, like many structures that have been described, sexual attraction.

Although it may seem an odd aspect of Triceratops, it is not. In different remains of Jurassic ceratopsians found in China these impressions of fibers also appear in the same regions, some of them being more numerous and even leafy. 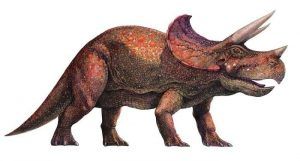 Although it clashes with the typical image of the smooth scaly skin Triceratops, it has been quite accepted in the scientific community, in a faster and easier way to the presence of feathers in theropods.

The Triceratops was a large herbivore with a snout that ended in a narrow beak, which would have been better for pulling out plants than for biting. The curious thing is the teeth, since it did not possess a single row of teeth but a battery of teeth that were between 36-40 rows.

This large number of rows of teeth is due to their polyphidontological character, i.e. having several generations of teeth like sharks, whereas humans are diffident (2 generations: milk teeth and adults).

When a tooth had been damaged or could no longer grind food well, it would fall out and be immediately replaced by the next one, so that it always had a perfect jaw for feeding.

Although in its discovery by Charles Marsh it had been named Bison alticornis, because he thought it was a species that lived in the Pliocene, later discoveries changed the name to the current Triceratops.

Over the years, many species of Triceratops have been discovered, but only two are catalogued as such: Triceratops horridus and Triceratops prorsus. Although there are no major differences at the phenotypic level, such as different lengths of horns or total size of the animal, they were found at different levels of strata, indicating that they lived in two different times and are therefore two different species.

Only a few are being studied to know if they are different species of Triceratops or if they are actually some stage in the development from young to adult of one of the two recognized species.

At the beginning of this decade, there was a controversy regarding different species of ceratopsians, but the main one was focused on Torosaurus and Triceratops due to the fame of the latter. Jack Horner indicated, along with other paleontologists, that the Triceratops “did not exist” and that it is actually the juvenile form of the Torosaurus.

Both species coexisted in the same period and many times they have been found in the same site, which led them to think that in reality the Triceratops was a juvenile state while the Torosaurus was the adult. They focus on the fenestrations and the solidity of the bone wheel.

As the animal ages, the fenestrae become older and the bone frill becomes a spongier tissue to better support the weight of the large adult. This kind of characteristics were observed in Torosaurus specimens, but not in Triceratops specimens, so they began to question whether the species were different.

In 2012, paleontologists Field and Longrich carried out another study on these specimens. They indicated that this change in the increase of the fenestrations and passage to a spongy tissue was different between what were considered juvenile Torosaurus and Triceratops specimens until the adult stages of the same.

Furthermore, in some findings only remains of one species were found, not both. Although they made these findings, they did not indicate whether they were for or against the possibility that they were the same species.

Along with the Triceratops-Torosaurus transition, another ceratopsyan species, Nedoceratops, was also introduced, but it has not been fully accepted as it has a separate genus.

Function of horns and bone wheel

Although we have always seen the Triceratops in many documentaries, series and films, charging another Triceratops head-on in a similar way as deer or goats do, it is actually far from reality.

This implies that, faced with an attack by a large predator such as the contemporary and famous Tyrannosaurus rex, how would it have defended itself? It is known that these dinosaurs had encounters, as there are traces of tooth marks on horns and bones of Triceratops.

The Triceratops could not have rammed him, but they were a method of intimidation and defense, since the carnivore would not attack head-on if he did not want to be impaled by his own weight on 2 large horns that pointed towards him.

Whereas the bone steering wheel could have been simply cranial ornamentation, both for sexual attraction and intimidation, as from the front it would make the Triceratops look even bigger and wider, with sharp bones sticking out from all sides. In addition, it has been assumed that this crown could have bright colors in the fenestra, attracting the attention of the females.