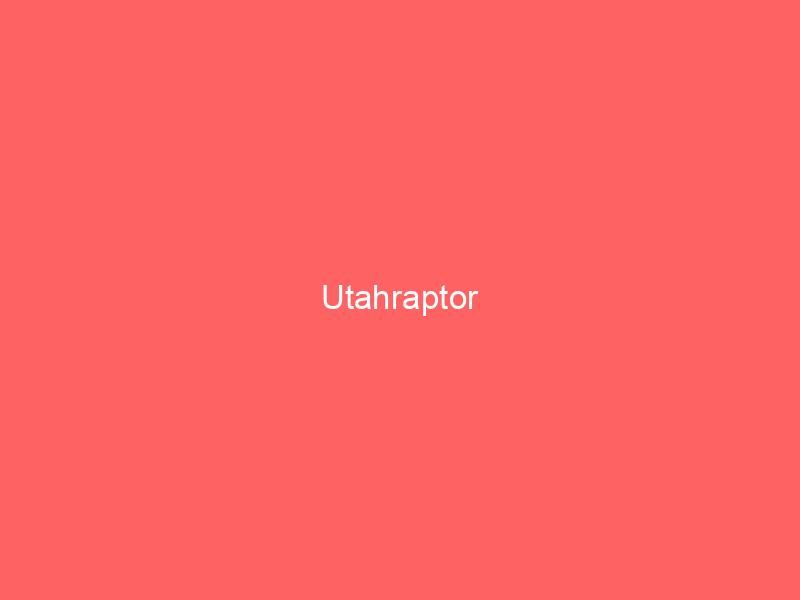 The Utahraptor was a genus of hunting dinosaurs that inhabited our planet during the Cretaceous period (about 128 million years ago). It is classified within the group of theropod dinosaurs dromeosaurs.

This genus would have had a medium size. It was about 7 meters long and weighed about half a ton.

It is one of the best equipped dinosaurs in terms of hunting clothes, it had sharp claws in both hands and feet, and it also hunted dinosaurs that were twice as big.

Fascinating, isn’t it? Want to know all the information about Utahraptor? Read on and find out absolutely everything about this carnivorous dinosaur from the Cretaceous!

What does the name mean?

The meaning of the name Utahraptor is “Utah Thief” or “Utah Predator”, the word “raptor” comes from the Latin “raptoris” which means “thief” and the word “Utah” refers to the American state.

Who discovered it and how?

The first findings about the Utahraptor were made in 1975 by researcher Jim Jensen at the Alvin Dalton Wells quarry in Utah-United States. In that finding, a great variety of bones of different species were found, among which were the fossil remains of our raptor, however, those parts were not attributed to this dinosaur at that time until later.

The parts found from Utahraptor in 1975 were a pair of claws from the upper extremities, part of a vertebra and two coccyxes.

In October 1991, Carl Limoni discovered more fossilized remains of Utahraptor in the Gaston Quarry quarry in Utah, in the so-called Cedar Mountain formation. In that finding, a huge claw was found, considered one of the largest ever found. In fact, a reconstruction of the leg of this theropod will be made later.

Later that year, in an expedition carried out by the College of Eastern Utah Prehistoric Museum, excavations were conducted by American paleontologists James Kirkland and Donald Burgm; in that exploration more remains of this dinosaur were found, including a claw, a tibia, a tear bone and part of the front jaw.

This dinosaur was described in 1993 by the paleontologists James Kirkland, Robert Gaston and Donald Burg.

At the beginning of this article, explain the origin of the name Utahraptor. However, this dinosaur is called Utahraptor ostrommaysorum, so the specific epithet was named after the famous American paleontologist John Ostrom.

Although it was also called ostrommaysi by Chris Mace, founder of Dinamation International, it was also considered to be called “Utahraptor spielbergi” in honor of the renowned director Steven Spielberg because it resembled the Velociraptor from the Jurassic Park movies. However, the scientific community did not approve of the name.

Where and when did he live?

Utahraptor lived in the early Cretaceous period, some 128.5 million years ago. Its usual territory was in the United States, more precisely in Utah.

This dinosaur’s habitat is believed to have been in forests, where it is generally believed that it made its nests and laid its eggs. On the other hand, it is also believed that it was common to see it in dry areas and in plains where it was easy to hunt.

What did he eat?

His diet was mainly composed of other dinosaurs and some mammals that hunted some of them regularly.

His diet was based on hunting large ornithopods such as Iguanodon, Aeolian and Tenontosaurus. It could also have fed on sauropods such as Sauroposeidon and Astrodon.

Many researchers claim that it was able to hunt large dinosaurs since they worked in herds and attacked such prey in small groups of up to 4 to 5. However, this has not yet been fully proven.

As for its physical characteristics, it could be approximately 7 meters long, up to 3 meters high and could weigh up to 500 kilograms.

This dinosaur was a theropod, which moved on its two legs, in addition, it had many large claws at the end, being the middle one extremely large reaching about 22 centimeters, that claw generally kept it up and ready to attack at any time.

On the other hand, at a general level it was a dinosaur with a body adapted enough to be agile and fast, in addition, it had a very unusual characteristic, since it had relatively long arms and at the end it had claws that were quite sharp that without a doubt represented a great advantage at the moment of hunting, because surely it facilitated him to take its prey.

These claws were one of the main tools of the Utahraptor, they could cause serious injuries to their competitors and their prey, kicking and scratching, with their claws sufficiently well developed and sharp. In this video you can see how he used these claws, in a fierce fight against a Gastonia.

As for its skull, only small fragments are known, so the shape of its head was deduced based on this dinosaur’s kinship with other species. The most common reconstruction is based on the Deinonychus skull, though, it is also believed that it may have had the head as the Dromaeosaurus with whom it shares much similarity.

From its teeth, part of the upper jaws were present, so it was possible to ascertain that it was a carnivore from the Dromaeosauridae family. Its teeth could reach a length of approximately 6 centimeters.

Nowadays in many illustrations Utahraptor is depicted with feathers, however, this is only speculation and is not proven. Since no signs of feathers were found. Furthermore, that in other Dromaeosauridae (taxonomic classification) such as Deinonychus and Dromaeosaurus no evidence has been found, but because in a large number of dromeosaurids have been found and it is known that the birds are the descendants of a dromeosaurid branch are represented in such a way.

The Utahraptor is considered one of the best predators in history along with other specimens, since it was equipped with everything necessary to face any prey, and that is that the speed combined with its great equipment of claws and teeth did not leave the prehistoric lovers indifferent.

Today it is impossible to determine exactly whether it moved in herds or had a solitary lifestyle. However, one thing that might indicate that they lived in herds is the presence in the area of a considerable number of ornithopod sauropods that would be too difficult for an adult Utahraptor to hunt alone.

To support a little more that these dinosaurs lived in herds, some researchers argue that it was sometimes difficult for them to attack the large sauropods. Due to the position of their claws, so for example if the Utahraptor attacked a sauropod head-on, which was superior in weight, it could cause serious injury or even death.

Therefore, it seems that organized hunting in a herd was the most viable and logical thing for this dinosaur, so it is presumed that the different members of the herd assumed a role at the time of the hunt: one group was in charge of distracting the prey in front, while another group was in charge of attacking the neck and body of the animal, while the latter was unaware, but these are speculations and comparisons with animals that attack in a herd nowadays.

It is possible that the Utahraptor occupied a higher level of the ecological pyramid, due to its teamwork, speed and claws. Among Utahraptor’s menu was a long list of dinosaurs that we mentioned earlier.

Some curiosities about Utahraptor