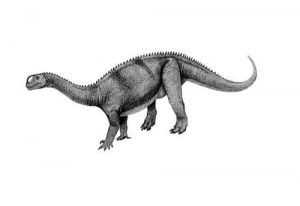 Here we will find all the information regarding the Wakinosaursu, very useful if you need to know everything about this amazing dinosaur and understand how special this specimen is.

What does the name Wakinosaurus mean?

Its name, like most of the dinosaurs found on the Asian continent, is derived from the place where it was first found. In the case of this special dinosaur, the Sengoku Formation was found in the area of Wakino, Japan, north of Kyushu Island.

The Wakinosaurus is a carnivorous dinosaur whose identity was doubtful, since it was first known only from a fossil tooth.

This fossilized tooth was discovered in Fukuoka in the 1990s by Masahiro Sato, while in the same year Yoshihiko Okazaki reported the discovery in a publication.

In 1992, Okazaki named the species, and its generic name refers to the Wakino subset of the Kwannon group, of which the Sengoku formation is a part, and its specific name was given in honor of Sato.

This Wakinosaurus fossil was, due to certain events later explained, the first Japanese dinosaur officially described.

In the 1930s the dinosaur Nipponosaurus had been described as the first in Japan with its physical characteristic resembling a duck from Sahalin Island (when it still belonged to Japan), but later the territory was annexed to Russia.

This species was initially attributed to the family level as Megalosauridae indet, as the specimen was too fragmentary.

Later in 1992 the scholar who made the first description decided that it was different enough to be attributed to a new genus and species of dinosaur.

Today Wakinosaurus is considered a dubious name, and is simply indicative of the presence of a large carnivorous Theropod dinosaur in the Lower Cretaceous of Japan.

Wakinosaurus was first described as a megalosaur, but today it is considered a nomen dubium and an indeterminate neotheropod.

When did it live?

It lived in the Upper Cretaceous in the Hauterivian, about 135 million years ago and its remains were found in Japan, which leads us to discern that this was its territory and the place where this particular species maintained its carnivorous lifestyle.

Being a carnivorous dinosaur, it can be seen that its diet was based on animals smaller than itself, but because its teeth were so large and too strong, it cannot be ruled out that it could hunt prey even of its own size.

The single tooth Wakinosausru fossil with a crown approximately 7 centimeters long is the only first fossilized specimen found so far.

Found in a river bed with fossilized freshwater gastropods and a strange turtle fragment, it was named Wakinosaurus in 1992 by Ozaki with information collected from a single tooth, well, part of a single tooth.

Apparently, its tooth is similar to a leaf with fine cutting serrations on both edges and according to its author it is similar to those of Prodeinodon kwangshiensis which was a possible carnosaur thermopod from China equally doubtful due to the coincidence that it was analyzed by means of some broken teeth, but in this case there were four of them.

The only remaining Wakinosaurus would have been triangular in shape and possibly 7 cm long and a little more than 3 cm wide at its base.