A dangerous and terrifying dinosaur

In this article, we will talk about the Afrovenator a fleshyaurus not as popular as the T-REX or the Allosaurus. But it was undoubtedly just as dangerous and terrifying…

What does the name Afrovenator mean?

The specific name of the species refers to the location where its fossil remains were found: Abaka, Niger.

The first remains of this dinosaur were found in 1993, in what is known as the formation of Thiouraren in Abaka, Nigeria.

The Afrovenator abakensis was named in 1994 and briefly described by Paul Sereno.

It is also one of the best-known theropods of the African Cretaceous. Although, as we will see later on, he actually lived at the end of the Jurassic period and not in the Cretaceous period as we thought.

In 2003, a more rigorous analysis by Oliver Rauhut classified it as Allosauroidea. Although according to later analyses, this specimen had a better position in Megalosauridae.

When and where did the afrovenator live?

At first, it was thought that, based on the geological evidence found in the layers where the fossil was found, it existed in the early Cretaceous, so it was believed that it inhabited the earth about 136 to 130 million years ago.

However, a new assessment of the sediments was carried out, and it was found that it was actually dated to the late Jurassic period.

So it would have inhabited the earth between 168 and 157 million years ago. Their habitat consisted of lush wooded areas near lakes or rivers.

What did the afrovenator eat?

Nothing is known about their social behavior, but from the findings of other theropods (Allosaurus, Mapusaurus, and Deinonychus) it can be concluded that they may have hunted adult sauropods. 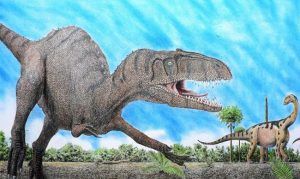 According to the fossils found, it is estimated that this dinosaur could reach approximately 7 to 8 meters in length. And it was also a slim build, so it could weigh up to 1 ton.

The Afrovenator was endowed with relatively long arms and legs, compared to other fleshyaurus such as allosaurus.

The window of the maxillary skull moves backwards, the premaxillary window is slot-shaped. The square is long and corresponds to more than half the orbital depth of the skull.

The cranial chamber and other ornaments are not very pronounced compared to some other theropods, the tear crest is hollow.

The cervical vertebrae have deep, pneumatic foramina and when articulated form an upward curve that supports the head above the height of the back.