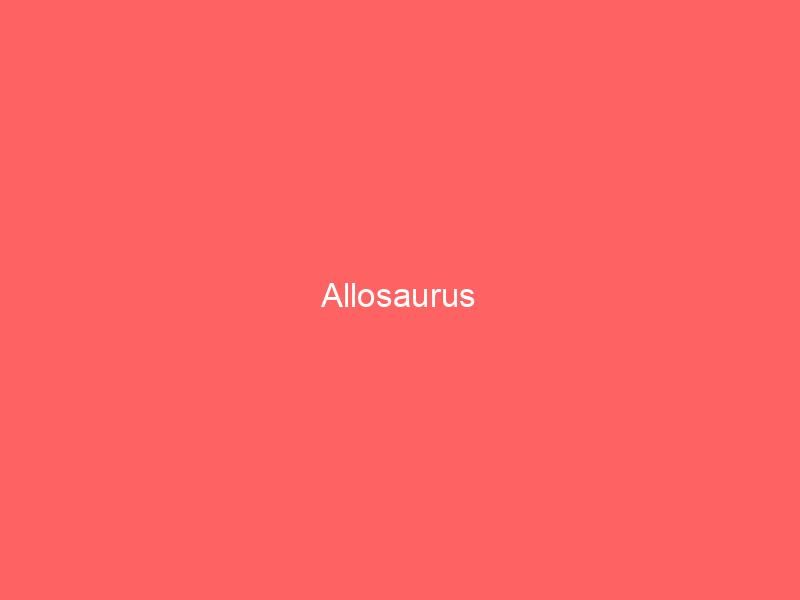 The genus Allosaurus was a group of allosaurid theropod dinosaurs that lived during the Jurassic Period, approximately 155 million years ago, and shared its habitat with several giant sauropods.

Its name comes from the Greek and literally means “strange lizard”, mainly due to the protuberances that appear on its skull.

Obviously, it also seemed to be a strange specimen to its discoverer, the famous paleontologist Othinel Charles Marsh, who observed that the vertebrae found in the specimen were different from the other theropods found previously.

Would you like to know more about him? It is certainly not surprising that these incredible prehistoric animals arouse great fascination and concern.

If you want to go beyond the brief summary we have given you so far, here you can enjoy all the information about the Allosaurus, a dinosaur as strange as it is ferocious. Read on and find out all about this peculiar carnivorous dinosaur from the Jurassic period!

Discovery of the Allosaurus

The territory in which these animals managed to develop was the one we know today as the European continent, as well as the territory that is now the American continent, precisely in the northern area of it.

Within this genus, we have also been able to find and describe an important group of species. One of these species, the most representative of all, is called Allosaurus fragilis, which was found in North America, specifically in the United States.

However, there is another species that has become very important at a scientific and cultural level over time, the species that is called A. europaeus, a species that was initially found in Portugal, and due to this fact it was given the name, however later remains of this animal were also found in the African continent and in the Asian continent, we are talking about Tanzania and China, respectively.

What differentiates this dinosaur from other specimens known as theropods is that Allosaurus was much larger, with a length of more than 9 meters, but in general this dinosaur shared many similarities with the mentioned theropods, so it was easier to detect similar qualities than pronounced differences.

It has been stated that this animal’s diet could have been based on the net consumption of body meat from other weaker specimens that lived in its territory at the same time.

Likewise, it is possible to observe how its extremities were very strong and totally adequate to be able to carry out the activity of hunting, in turn these extremities had very powerful claws, without forgetting to mention that the structure of the tail was vital to be able to maintain a healthy balance of the total weight of its body.

It is also known that it developed its life in coexistence with other dinosaurs, among which we can mention the Apatosaurus, a famous and really colossal dinosaur considered within the group of the sauropods, without forgetting the huge Diplodocus, which was also placed within this group, and even with another dinosaur officially identified as Camarasaurus, all of them turning out to be sauropods.

About other dinosaurs with which the great Allosaurus could live, but that were not precisely predators, we can mention the Stegosaurus, which also turned out to be an interesting prey for the dinosaur protagonist of this article, the same happened with the Dryosaurus.

An important fact to highlight is that among all the large predators that came to live in the north of the American continent, this was actually the most common.

We can affirm this because a large number of fossil remains were found, the numbers of the records themselves support this assertion, so much so that a total of six dozen individuals found that belonged to this genus have been listed.

What is positive about all this is that many of these remains were in an excellent state, which greatly facilitated the possibility of obtaining more accurate data on this creature.

In addition to all this, a large number of individuals were found in the same place, which is actually a sign that this animal probably liked to live in a herd or in a group, as other dinosaurs did, although at present this theory does not have a completely accurate validation.

Characteristics of this predator

As we have mentioned before, this animal turns out to be a quite generic theropod, we say this because it had the characteristics of theropods without having marked differences that make us doubt about its nature.

It had a larger cranial area and a neck that did not enjoy being stretched, although its tail was long, although the extremities of the anterior area were smaller.

About the symbolic species of this animal, the interesting Allosaurus fragilis we can say that its length did not exceed 850 centimeters long, while its height was on average about 350 centimeters, as for the total weight of this animal has come to calculate that could have almost 1000 kilograms.

The cranial zone of this creature presented a series of crests that shone by their irregular form, which were located in the low zone of this structure, right in the closest area to its eyeballs; in addition we can clearly observe the set of dental elements that were in the zone of the jaw.

Another fact that has been obtained in relation to its weight is that it probably was not very bulky, despite its enormous appearance, surely its structure was designed internally to prevent the animal from being heavier.

Thanks to this we can affirm that the agility and the speed of this creature were its points in favor when it was a question of giving to hunt some of its preys, due to it has come to be compared with the animals that nowadays we know as rhinoceroses, precisely we speak about those species that at present are in India.