The genus Anchisaurus includes a group of early Jurassic sauropod saurian dinosaurs, which inhabited our planet about 200 million years ago, being the first sauropods to populate the Earth.

The primitive characteristic of these sauropods is that they were bipeds and not quadrupeds, although it is true that they could alternate between both positions.

In specimens of later sauropod species, the bipedal position is more clearly visible because their hind limbs are longer than their forelegs.

The name Anchisaurus literally means “nearby reptile”, partly because its first fossils were believed to be part of a human skeleton.

Surprising, isn’t it? If you want to know more about this dinosaur don’t miss reading, in the following article you will find a wide and detailed information about Anchisaurus.

This prehistoric animal belonged to the Kingdom of Animalia.

The remains or vestiges of this unique specimen were initially confused with the remains of a human being as we mentioned initially, that is, the size or dimension of the bony elements found were quite similar to the bones we possess.

Having said this, it is quite easy to deduce or conclude that these bone elements could not have exceeded 2 meters in length, as confirmed by a group of scientists in charge of their subsequent analysis and study.

From the beginning it was also believed that the volume of the animal did not exceed 27 kilograms, however, later on, another group of remains were obtained that belonged to a new species of the same animal, which enjoyed larger dimensions and has even been determined that the size was twice the specimen initially found.

Regarding the structure of the digestive system, we can clearly say and deduce that this was, in fact, a much more complex and complicated system to analyze, since the animal-based its diet on vegetable consumption and the process to transform this material was much more structured.

In fact, it has been said that the intestinal elements were much longer than the attempts of other specimens considered as carnivores or even omnivores.

This characteristic is very important and worthy of study, because if these intestines were large as has been presumed, then they should be located in the frontal area of where the pelvis was located.

This is of great importance in the behaviour of the Anchisaurus, since the weight of these intestines forced the specimen to remain in a position on all four extremities, and not on two of its extremities, however, it was capable of doing so, it had the strength to be able to remain on two legs but not for a long time.

In order for this creature to maintain its balance, in conclusion, it would probably have used all four limbs it possessed, it was the only way to do so, at least in a sustainable way.

This is why other large specimens also had this characteristic, and the vast majority of them felt much more comfortable in a position where they used their four limbs, and not just prostrated themselves in two, as was originally believed.

This is a very revealing detail about the world of dinosaurs, as an example, we can mention a sauropod called Diplodocus.

This set of specimens called Anchisaurus was, in fact, a quite successful set, which survived for a long time, even developing its existence for two periods, something that has not always happened with these prehistoric animals.

The dental structure of the animal had few elements, and between the teeth, a series of voids could be observed that had not been seen until the discovery of other specimens placed inside the prosauropods.

In addition to this, it was the great paleontologists Peter Galton and the prestigious Michael Cluver who reliably stated that it was, in fact, a usually four-legged animal, but it retained the ability to stand on only two extremities because of the fact that it could reach vegetables on top of trees.

However, there is another group of paleontologists who have made important and numerous findings, which state that this creature probably also ingested food from the bodies of other dinosaurs of its time.

This leads us to believe that it is possible that it was partially carnivorous, but this has not yet been proven, there is not enough scientific evidence to support this argument in any way or other.

In reality, the structure of the teeth of this specimen was designed to extract and crush vegetables, it had the jaw area also designed for this function, it was almost impossible that these structures could at any time tear or break the fleshy tissues of other specimens living in their territory.

However, there is still a great deal of controversy about this, so we must not pre-empt recent scientific evidence and studies.

On the other hand, the ocular elements of this creature enjoyed a considerable dimension compared to the rest of the skull, but with the detail that they were not located in the lateral areas of this area, so it is likely that this animal did not need to have a wide field of vision to protect itself from the dangers of its environment.

Given the low specialization and the location of the eyeball, we must consider the possibility that even this animal has not been a victim of any particular predator.

The hands located at the end of the front extremities of the specimen had the ability to close and open as if it were an instrument for picking up and releasing objects, so it can be said that this structure was quite advanced and sophisticated compared to other specimens of its time.

In addition, one of the fingers on these hands was the closest thing to what we now call a thumb, so the function it served was quite useful.

On the feet, which were at the end of the extremities of the rear area, they had a total of five toes, each of which touched the ground completely, while the elements we know today as ankles, enjoyed great strength and solidity, something similar to all the examples of those years, the most primitive examples.

Discovery and study of the Anchisaurus

The discovery of this animal was the first of all the dinosaurs ever made, so it can be said that this creature was the first to be discovered, especially in American territory, in the northern part.

The first known bone structure of the Anchisaurus was found precisely in the 19th century, two years before the 1820s, although scientists at that time came to believe with great certainty that it was, in fact, a bone structure belonging to a man.

However, it took more than 30 years for this classification to be revised back to the truth: it was a dinosaur. This necessary scientific correction took place in 1855.

After the beginning of the 1860s, another scientist was in charge of making another important discovery of numerous remains, a renowned researcher named Edward Hitchcock, who also gave this bone structure the name Megadactylus.

In spite of this, almost 20 years later, another researcher managed to find another set of remains and immediately proposed to change the name to Anchisaurus, this famous researcher was Charles Marsh.

This mistake was to be using a name that was not available, so precisely in 1885, the change of name was carried out. 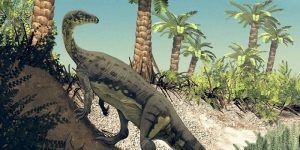 Numerous groups of remains have been found all over our planet, from the African continent to the American continent, so a certain group of scientists have taken advantage of the occasion to bring back the theory of the great continent, the one called Pangea, because in addition to this they had also managed to find vestiges in the Asian continent.

By the way, we have to make it clear that many of the recent findings have not been considered valid until now, so we should not confuse these kinds of details.

The species that Marsh himself studied and reviewed in several of his official publications was called Anchisaurus major and was validated by the entire scientific community.

In the same way, the species that received the name Anchisaurus solus in 1892 was studied again more slowly and was considered the same species mentioned at the beginning, the so-called Anchisaurus major.

In addition, another renowned paleontologist, Robert Broom, made his appearance, who already in 1911, took the trouble to make the review of a new species, to which he placed the official name of Gyposaurus capensis, based on some remains that were found in the African continent, exactly in the southern zone of that one.

However, this official name was not going to last for long, as Peter Malcolm, a renowned researcher, renamed it Anchisaurus capensis, after more than 60 years, in 1976.

It has also been confirmed that the bone structure of the dinosaur in this article was never completed, despite a large number of traces found, so the reconstructions were actually completed thanks to the comparison made to this specimen with other creatures who happen to be direct relatives of the individual.

Up to the present time, it has been proven that the neck area has a fairly long shape, as well as its tail, which enjoyed a similar size.

A detail that also presented other specimens known as prosaurópodos, so that later with the passage of time, it was confirmed that this specimen was the oldest sauropod that we have come to know.

Other interesting information about Anchisaurus

First of all, we must be quite clear that the specimens placed inside the prosauropods are actually the direct ancestors of other animals that are placed under the name of sauropods.

For this reason, the mysterious Anchisaurus was considered as a prosauropod when the remains of this animal were discovered.

However, a series of details about these groups were clarified and finally it was placed inside the specimens known as sauropods, being Anchisaurus itself one of the oldest specimens of this group, a detail that is worth remembering.