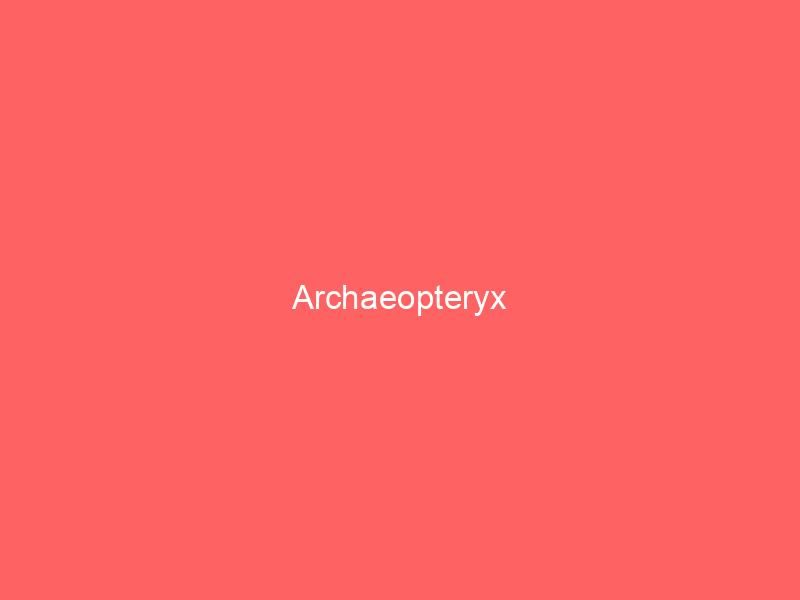 In the genus Archaeopteryx there are currently two species, A. bavarica and A. lithographica, with the entire scientific description being based on the second species named.

This species has been classified as a theropod saurischian dinosaur, a group that many scientists include among birds.

However, it was actually at what we can call “halfway” since beyond the feathers it presented aspects of both the theropod reptilians and the future birds.

This specimen dates from the Upper Jurassic period and is believed to have inhabited our planet approximately 150 million years ago.

The name Archaeopteryx comes from the ancient Greek and means “ancient feather”. Would you like to know more about this disturbing dinosaur? Then be sure to read this article where we provide you with extensive and detailed information about Archaeopteryx.

Taxonomy of the Archaeopteryx

It was not until the 19th century that the first individual of Archaeopteryx could be completed; to be more exact we can say that all this happened in the year 1861. A finding and subsequent study was made public at that time.

After that, other creatures belonging to this same genus were found, and a total of eleven of these specimens were obtained, which were of great help for the study and analysis of this prehistoric animal, which although it looked very much like a bird, was definitely a dinosaur.

It is also important to bear in mind that Archaeopteryx has been catalogued as one of the oldest birds in history, placing this animal within a group known as Avialae, although this classification does not mean that it is not included in the superorder Dinosauria.

It is said that this genus represents “one of the oldest birds”, which is not the same as saying that it is the “oldest bird”.

This is due to the fact that some scientists have included in this same family Avialae other specimens of greater antiquity than the Archaeopteryx itself; among which we can cite the Anchiornis or Aurornis; and according to other scientists the enigmatic Xiaotingia would also enter here.

However, the term “oldest bird” is becoming more and more accepted to refer to Archaeopteryx, not in vain its name also means “ancient feather”.

The life of Archaeopteryx on planet earth

It is estimated that Archaeopteryx lived more than 150 million years ago, that is, it lived during the Upper Jurassic period, in the area or extension that we know today as Southern Germany.

Of course, at that time the European continent was very different from what we know in the aquatic world, because back then this continent was just a big archipelago with tropical climate conditions, which favoured the growth and development of certain plants.

Another characteristic about the existence of Archaeopteryx in our planet is that it seems that its life habits made it a daytime animal, being this a statement that is considered quite true.

There are two main theories about its form of life on earth: one that indicates that it was a terrestrial animal and the other that it was an arboreal animal, that is, that it walked in trees most of its time.

Although here is where the controversy is found, since the habitat is not that it had many trees precisely, but rather it was a place with low bushes and flora in general adapted to the mainly dry conditions of the place and the time.

Likewise, it is not possible to rule out the option that it might have lived among the bushes, as some of our modern birds do today.

One might also think that it could have lived both on the ground and in the bushes and fed in either place depending largely on the prey it had captured at the time.

To arrive at the latter possibility some scientists have focused mainly on the length of its legs and feet.

What all scientists seem to agree on is that its diet was based on small animals it hunted, either with its teeth or its claws, something that has not yet been determined with total accuracy.

Characteristics of this primitive dinosaur and bird

About the interesting Archaeopteryx we can say that it was the closest thing to what we know today as a magpie; especially if we refer to the magpies that live in the area of the European continent.

Obviously, the size of the Archaeopteryx was much more pronounced and it had somewhat larger dimensions, even comparing it to the size of crows today.

It had rounded wings that at the ends became much bigger, although these apparently were not prepared to fly, so this animal would rather glide.

But this fact is unknown for the moment, although the fact of not having a large sternum that holds the muscles that have to do with flight as our current birds have makes us think precisely what we have said, that they would not fly.

On the other hand, we find that its feathers are advanced, as can be seen in today’s birds, which not only leads us to the conclusion that they began to evolve before the Upper Jurassic, but also makes us wonder whether this dinosaur really did fly.

But going back to the characteristics of the feathers, these are very similar to the ones our birds have nowadays, since they are asymmetrical with vexiles that give stability, however it is believed that these feathers would be similar to down or a mixture between feather and fur.

Archaeopteryx and similar characteristics with dinosaurs

It should not be lost sight of the fact that Archaeopteryx has many characteristics in common with dinosaurs, not in vain is it considered as such.

In fact, it has been said that it has more similarities with them than with today’s birds, although at first nothing makes us think about it.

What are these similarities? We show them to you below:

Evolution: From dinosaur to bird

Because of all that we have discussed so far, we must be guided by the evidence that exists and that tells us that this creature happens to be in the intermediate stage.

When we talk about this intermediate stage, we are actually referring to the transition between the dinosaurs and the birds that we know today.

It is for this reason that this animal is fundamental in order to understand the history of our planet, since its discovery meant a great advance in the knowledge of the origin of these mysterious birds and how it is that the dinosaurs became the birds with which we live today.

And if we add to all this the fact that two years before its discovery Archaeopteryx Darwin published “the origin of species”; everything seems to indicate that this is the link between dinosaurs and birds, as well as an important piece of information in favor of confirming the theory of evolution.

Where can you find Archaeopteryx

There is little more to tell you about Archaeopteryx, except that its fossil remains are widely distributed and thanks to this its reconstructions are exhibited in various places.

If you want to observe closely the remains of this animal, which is essential to understand the evolution of birds, you can do so in any of the following museums, all of which are located in Europe: