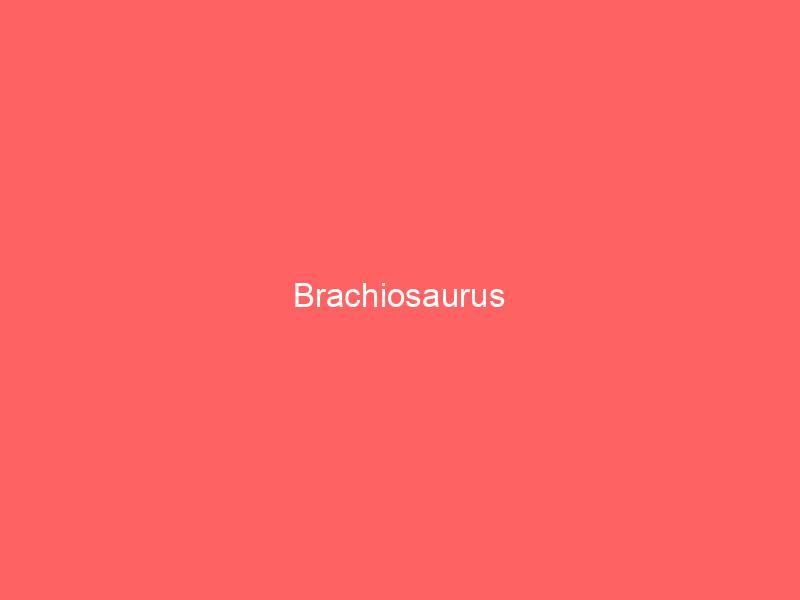 The Brachiosaurus was a genus of large herbivorous dinosaurs that inhabited our planet during the Jurassic period, approximately 154 million years ago.

It is a large dinosaur that has been classified within the group of sauropod dinosaurs.

This genus of dinosaur was quite large, with about 26 meters long and about 9 meters high. As for its weight, it would have been about 35 tons.

This specimen would undoubtedly have a place within a ranking of the largest dinosaurs ever found.

The Brachiosaurus is a clear example of the characteristics of the sauropod dinosaurs: a large body, it had a very long neck and a very small head in comparison.

If you are interested in knowing more about it… Keep reading because here is some complete information about the Brachiosaurus. Don’t go away and find out everything about this herbivorous dinosaur from the Jurassic period!

Taxonomy of the Brachiosaurus

We must emphasize at this point that at present this genus is represented by only one species, B. Altithorax, but this could change if new fossil remains were found that belonged to the same genus but could be considered as a different species.

For this reason, from this platform we will do our best to keep this section updated in case there are changes in the taxonomy of this dinosaur.

The fossil remains of this dinosaur were found in one of the most popular formations of this science, in the famous Morrison Formation, which is located in the northern area of the American continent, in the country of the United States.

The work of reviewing or describing this unique extinct animal was carried out by a famous researcher known as Elmer S. Riggs, three years after the beginning of the 20th century, in the year 1903.

This researcher took into account some fossil remains that were found in the Colorado River, which is located precisely within this state with the same name, specifically in the western region.

Characteristics of the Brachiosaurus

About this animal we can affirm that the area of its neck was not exactly short, on the contrary, its neck enjoyed being stretched, although we cannot say the same about the skull, since it turned out to be of a small extension.

However, its body did enjoy an exceptional size, although this turned out to be quite frequent in the specimens we know under the name of sauropods.

Taking into account this important fact we can affirm that the arms were a symbolic quality in this animal, due to this is that this dinosaur was given this official denomination, since its name is formed by the Greek words that mean “arm” and “lizard”.

Besides, the area of the tail also presents an interesting characteristic, and that is that it turns out to be of a smaller length if we compare it with the area of the neck, something that did not happen with other specimens known as sauropods.

At least this is a very noticeable difference in comparison with other sauropod dinosaurs that inhabited our planet during the same Jurassic period.

Additionally, we should know that Brachiosaurus actually turns out to be a genus, as we had already mentioned, but also thanks to this genus, a whole family of dinosaurs could be named.

This family is the one we can now know as Brachiosauridae, in which we can also find a huge group of sauropods from that time, a fact that we should not leave unnoticed.

However, a really interesting fact about this animal is that many of the data we know today and present in this article, have been discovered mainly due to a mistake.

Although later it would be found that such data also belong to the Brachiosaurus, and is that a scientist from the country of Germany, known under the name of Werner Janensch, was responsible for naming a group of fossil remains as Brachiosaurus by mistake.

These fossil remains were found in a formation that was located in another continent, and after a while everyone would realize this mistake.

However, thanks to that mistake is that it was possible to elucidate and reach a series of conclusions that finally helped to know much better both the Brachiosaurus and the other specimen called Giraffatitan brancai.

This last specimen is the one that actually owned the fossil remains found, which was also finally placed within the group of specimens known as brachiosaurus, this whole story began four years after the beginning of the 1910s.

What really happened is that after several studies they realized the differences between these two specimens, so they decided to create a different genus for each one.

In this way they were able to avoid the confusion between these two animals, which at first seemed to be the same and were thought to be individuals belonging to the genus Brachiosaurus.

What is interesting is that the same thing was repeated on several occasions, but taking into account other species and other remains found on the African continent, precisely in areas surrounding the country of Tanzania, where the Giraffatitan brancai could be found.

We must not forget to mention that similar cases have also arisen on the European continent, causing a series of mistakes and an atmosphere of confusion in the scientific world of that time.

In fact it is said that there are no more than five individuals that have been found in this formation, which really is a drawback to further study and analyze this dinosaur.

On the other hand, this animal has been considered for many years as a true ramoneador, which is equivalent to saying that this specimen was responsible for feeding on the vegetables that were located at the top of the trees.

It is believed that it could reach that height by using its extremities in the rear area, reaching the point of steepness in order to reach the maximum length possible.

At first it was thought that this was a cold-blooded animal because of its large size and especially because of the type of feeding it had to do, but as we mentioned, the scientific investigations themselves did their job.