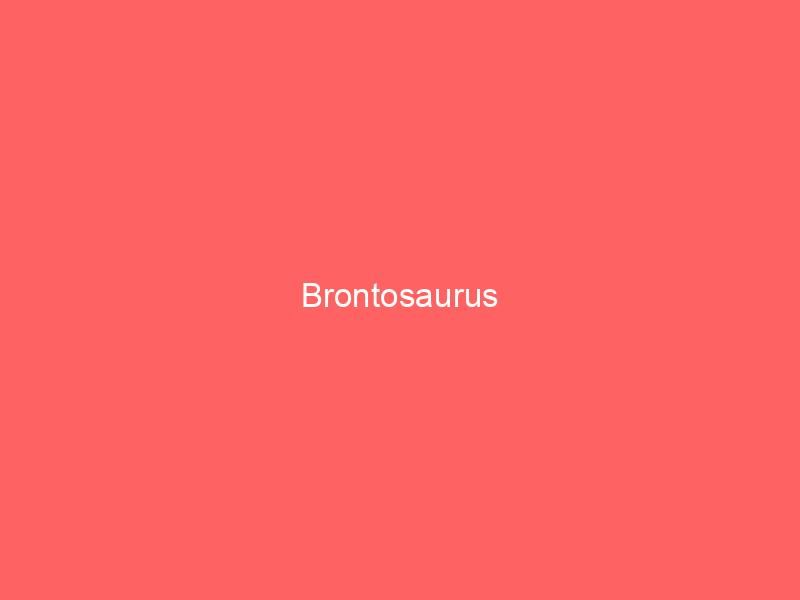 The genus Brontosaurus is a taxonomic group that includes a number of sauropod dinosaurs that have had problems with their biological taxonomy.

Finally this genus was used again at a scientific level after several studies of anatomy compared with other specimens of other genera of diplodocytes, which led to consider Brachiosaurus as a unique genus.

But we better tell you how everything has happened around this giant dinosaur for you to understand it much better. We encourage you not to miss this extensive and detailed information about the Brachiosaurus.

It is important to point out at this point that this dinosaur genus is represented by three different species, found between the year 1879 and 1994.

These three species are the following: B. excelsus, B. parvus and B. yahnahpin.

Comparison between Brontosaurus and Apatosaurus

The name Brontosaurus comes from the ancient Greek and means “thunder reptile” or “thunder lizard”; and among the genera where it has been introduced in other times, the most used has been that of Apatosaurus due to its great morphological similarity, in terms of longitude and altitude.

In addition, we must take into account that both species lived at the same time, in the Jurassic Period, approximately 153 million years ago.

And this has happened thanks to the study called Peerj, which is public so that anyone can access it; which has been published in April 2015 and has been carried out by Portuguese and English scientists, who are Emamuel Tschopp, Octavio Mateus and Roger B.J. Benson.

In this study, in addition to talking about these two types of dinosaurs, we find mentions of the Diplodocus, with which the Brontrosaurus has also been confused at some point, explaining the chronology of these giants as well as other data that leaves no room for doubt about the difference between species.

But let’s not get confused and see easily why these mistakes have taken place:

With these data and taking as a reference that the vertebral form is exactly the same in both dinosaurs (15 cervical, 10 dorsal, 5 sacral and 82 caudal) it is normal that they have been confused throughout all these years.

Now that we have clarified that Brontosaurus is a unique genus, and trusting that the scientific community will not go back on its word, let’s move on without further ado to get to know it a little better.

The first Brontosaurus was discovered by paleontologist Othniel Marsh in the western United States in 1870, and was later taken to the Peabody Museum at Yale, New Haven, to be studied.

In 1899 a team from the Field Museum in Chicago (USA) discovered another skeleton that seemed to be between the Apatosaurus and the Brontosaurus.

It was at this time that the “big mess” began because as it was so similar to the two species, no reason was found for them not to be included in the same genus. Thus, in the year 1903, Brontosaurus became Apatosaurus.

It was finally in the year 2015 with the last and new studies and discoveries made, that Brontosaurus became a single genus again.

The paleontologist Emanuel Tschopp justifies the fact that both genera have been unified into one with the data available so far.

At the same time, another researcher, Roger Benson, comments that the differences found between both species are very numerous and are closely related between the genera.

As we had already mentioned finally three species representing this genus were described, next you will be able to observe the data of the different discoveries in a more detailed way:

The Brontosaurus is a sauropod, that is, it walked on four huge and robust legs, although we must take into account that the front legs were slightly shorter than the back ones.

They also had a single, central claw on their front legs that they were supposed to use to pull the bark off of tree trunks or branches or the leaves off of branches that were within reach when they stood on their two hind legs.

Obviously, these are only assumptions made as a result of studying the fossil remains.
They were not at all fast, their enormous size and musculature were not “designed” for that, hence the speed they could reach was between 20 and 30 km/h; the tracks found of these sauropods show us that they were capable of covering in a single day 20 to 40 km.

No skull has been found, but it is believed that it could be similar to that of Apatosaurus louisae.

It has a long, wide neck composed of forked vertebrae, with air sacs that lighten its weight.

Its tail was long but much thinner than the rest of the dinosaurs of its same family, as well as the ribs, which were also longer, making it have a taller torso.

The life of the Brontosaurus on planet Earth

As we have already mentioned, the Brontosaurus lived during the Upper Jurassic period, in an area known as the Morrison Basin, which extends from New Mexico to the United States, as far as Canada.

This is an area full of swamps and rivers, which is why there is a debate as to whether it was a more aquatic than terrestrial animal, this being the way in which it could easily support its weight and also have greater agility of movement, as is the case with the hippopotamus, for example.

Although it is a hypothesis not often followed, since they believe that it was a totally terrestrial animal.

Likewise, the debate continues in the scientific community and perhaps one day it will surprise us with a new accepted theory regarding this genus of dinosaurs.

On the other hand, the diet of the Brontosaurus was totally herbivorous, feeding on conifers, mosses, ginkgos and similar plants.

A diet very rich in nutrients, which would be responsible in part for the large size that reached the Brontosaurus and the long life they could have that is estimated at about 100 years!

And here we arrive with all that is known about the Brontosaurus, one of the dinosaurs with more controversy about its existence but at the same time ironically the most represented in the cinema.