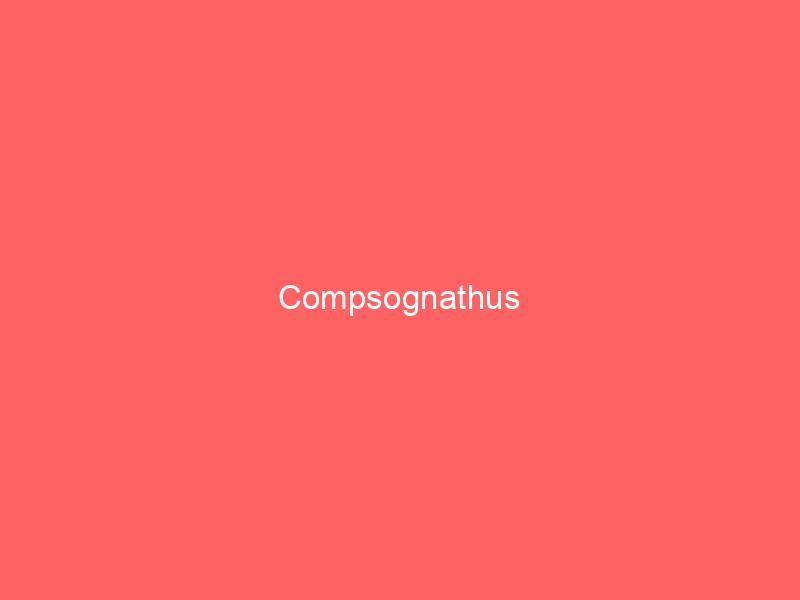 The Compsognathus was one of the smallest dinosaur genera that ever existed. They inhabited planet Earth during the Jurassic period, approximately 150 million years ago.

It is a peculiar specimen that belonged to the group of theropod coelosaurid saurischian dinosaurs.

This genus would have been very small, barely 1 meter long, which translates into a light weight of only 3 kilograms.

Undoubtedly, this specimen could be within a ranking of the smallest dinosaurs ever found. Even so, there is a dinosaur that is smaller than him, the Microraptor.

The Compsognathus, thanks to its small size and relatively long legs in comparison to its body, was a fast dinosaur, also due to its long tail that served both for balance and locomotion function.

Have you been left wanting more information about the Compsognathus? Then read on because there is still a lot to tell about this little carnivorous dinosaur from the Jurassic period!

At this point it is necessary to mention that this genus is formed by a single type species (through which all the scientific description is made), called Compsognathus corallestris.

However, this does not mean that there are no other species, since the discovery of new fossil remains belonging to the same genus but with evident differences could lead to the description of new species.

It all started when a group of paleontologists from the country of Germany, took charge of carrying out an expedition in search of traces of prehistoric animals, precisely in the middle of the 19th century.

These efforts had an excellent result, as they found a fossil that was in a very desirable state of conservation, which would later allow them a much more fruitful and complete study of the extinct specimen.

It was almost 100 years after this great event for the field of Paleontology, a little more to the south of the initial discovery, specifically in France, another encounter of fossil remains was carried out that would be highly enlightening.

These fossil remains found in France turned out to be from this same specimen, a fact that greatly benefited the process of studying and describing Compsognathus, an event that was greatly welcomed by many scientists.
Initially, German researchers believed that this specimen was actually quite small or of lesser magnitude, because the vestige they found on their land was particularly tiny.

It was even compared to a small domestic cock, but after what happened in the southern country, they realized that in reality it was a specimen that had not yet reached the adult stage, unlike the fossil found in France, whose size was much more considerable.

The diet of the Compsognathus

As for the diet of this unique specimen, much is known and quite certain, considering that this specimen was responsible for hunting smaller lizards but rich in protein, macronutrients essential for survival.

All these data are known thanks to the careful and conscious study of the belly of each vestige, which are still in an excellent state of conservation, so there is no doubt about the diet of this specimen.

A similar finding was made shortly afterwards, but it was only about some dental elements that were found in the southern European country known as Portugal.

However, even today it is not possible to say for sure that these vestiges belong to the Compsognathus, however, there are many possibilities that this is the case.

Since the remains of the animal could be found, it caused a lot of confusion initially, that is why initially it was not given a correct classification, despite the fact that it had a bone structure in a quite desirable state, a mistake that cost some prestigious researchers a lot.

For a long time this extinct animal was the smallest dinosaur that had been found throughout the history of Paleontology, so it was and remains a true symbol, a figure of study that so far continues to fascinate many amateurs and professionals.

However, the label of “tiny dinosaur” was not going to last long, because in the 1990s a new dinosaur was found and described that would actually become a prehistoric bird, identified under the name of Archaeopteryx.

The measurements of that animal have been constantly exposed and it is stated that it did not measure more than one meter long and its volume did not exceed 3 kilograms, as we have already mentioned, for a long time this was the smallest specimen that had been found and studied.

However, after years of consistent exploration, other extinct animals of much smaller size began to appear, such as the Microraptor and some others that we will gradually make known.

This dinosaur, Compsognathus, could walk in a bipedal position, on its two hind limbs, which were solid and at the same time quite fast.

The tail of this animal was quite useful since it served two fundamental functions in these specimens: balance, and in addition, locomotion.

These claws were totally and perfectly designed to be able to hunt their food very quickly, since the shape of the claws prevented the prey from escaping in any way.

As for the shape of its skull we can clearly see that it was long and at the same time thin, it also had a quite curious snout, this snout ended in a tip, which gave it a similar aspect to the birds we know in our times.

Now let’s focus our attention on what would be the area of the jaw, we can clearly observe that the lower area of the jaw presented an elongated shape as well, which did not possess any type of hole or opening, these holes (which it did not possess) were generally known in the arcosaurs, and other specimens also presented them.
As for their dental elements, we can say that they turned out to be terrifying, extremely sharp and ready to cut any kind of material, certainly we must admit that they were not of great size but they turned out to be quite useful.

This usefulness was due to the shape and the speed with which they could be used, as small blades ready for attack.

In addition we must emphasize the fact that the diet of the specimen was based on other animals of smaller size, as we have already seen.

This means that the little extension of the teeth was necessary for them to fulfill their function, even if they concentrated on hunting insects, the small teeth were more than enough to be able to grind that material.