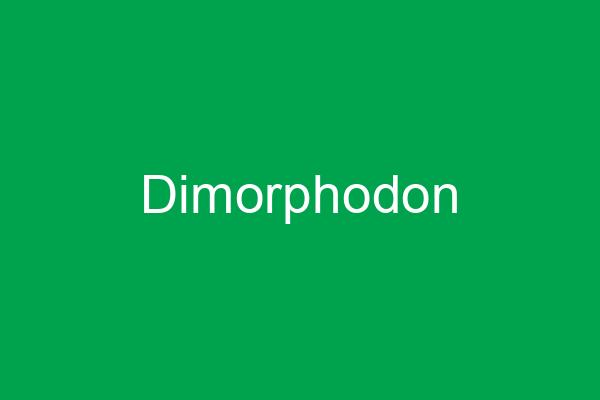 The genus Dimorphodon encompasses a series of aerial reptiles known as pterosaurs, so they are not dinosaurs, which lived on Earth approximately 200 million years ago, in the Early Jurassic.

The meaning of the word Dimorphodon that gives name to the group is “two-shaped teeth” since it has two groups of teeth.

This characteristic is very rare in pterosaurs and reptiles in general, since they have all the same teeth. This name was given by Richard Owen in 1859.

Two species have been found, an American called D.wientrabu, and a European found in the south of Great Britain called D.macronyx, being the English remains the first to be found.

Do you want to know more about this intriguing Jurassic aerial reptile? Then do not hesitate to read this article where we show you a wide and detailed information about the Dimorphodon.

Taxonomy of the Dimorphodon

So far, two species belonging to this genus have been adequately studied as we mentioned in the introduction, however, the discovery of new fossil remains could change this fact.

From this platform we will do our best to keep this information updated in case of any change in the taxonomy of this specimen.

This order is also informally known as “winged lizard or reptile”, which is actually the meaning of the word “pterosaur”.

They inhabited our planet more than 66 million years ago, this is the same as affirming that they lived during the famous Mesozoic era. The incredible thing about this great clade is that they were the first animals that had a spine and could perform flights without any problem.

An ability that was quite valued at that time, since it meant being out of reach of the most ferocious predators that were at ground level waiting for some prey or some victim to devour.

The structures that from now on we will call wings, which this reptile had, were composed or provided with a highly complex membrane, which initiated or was supported by one of the elements of the hand structure.

This is equivalent to saying that this membrane was born from one of the fingers and then distributed throughout the entire limb, it should be noted that the finger from which this structure was born was totally hypertrophied, a fact that we must take into account.

Additionally, the remaining body parts of these specimens were almost completely covered by a material that was similar to hair, remains of which were found in several places and in more than two different species, but which appears to be a structure in protofeather.

Moreover, we should mention that these pterosaurs lacked the upright posture characteristic of the members of this superorder.

The same goes for other animals like ichthyosaurs, and let’s not forget mosasaurs which are not found in the Superorder Dinosaur either, so they are not really dinosaurs.

On the other hand, a frequent mistake has been made, namely calling pterodactyls after pterosaurs, when this is not really their exact name, in fact pterodactyls are actually the reptiles found within the genus Pterodactylus.

It is for this reason that many press agents make a big mistake in confusing these official names, which later only succeeds in creating confusion among the public that is passionate about paleontology.

Discovery and history of the Dimorphodon

Several fossilized remains were found within a European country identified as England, where a researcher known as Mary Anning managed to find the first individual belonging to this genus.

This first individual found turned out to be from one of the mentioned species, Dimorphodon macronyx, all of which took place two years before reaching the 1830s, within a place known as Dorset.

We had to wait until 1998 for the second species known as Dimorphodon weintraubi to be described,

Characteristics of this airborne reptile

The length of this lizard could be more than 100 centimeters, while the thickness of the animal could not exceed 140 centimeters, if the measurement was made from the tail to the other end of its body.

On its skull we can indicate that it was of a considerable size and also had a greater volume, but the weight it had had to be reduced in order to facilitate flight.

For this reason it had depressions or holes in the structure of its head, which gave the animal much greater agility and, above all, reduced its weight.

About these famous cavities, Richard Owen himself made a statement to let the scientific world know how interesting this quality is, and he was really amazed.

The amazement of this great paleontologist was due to the fact that there had not been another known animal, within the vertebrates, that had so little volume considering the size of its bone elements.

Besides that, it became known that the brain mass was not as big as initially believed, while a series of primitive qualities that other ancient reptiles presented were also found.

About the structure of the snout we can say that it was a region with a lot of resistance, but it was also endowed with a lot of flexibility, inside this structure it could be placed a kind of bag formed by membranes, in the lower zone of it, which later would give rise to a beak.

The life of the Dimorphodon on planet Earth

Not much is known about a specific environment or habitat for this reptile, since it was found in various areas around the planet we can only say that the lizard preferred areas near the sea more than areas that were not.

In order to know what kind of food this animal carried, it is necessary to resort to the shape of its teeth and their consistency. This is a work that was already carried out by several scientists, who concluded that its diet was quite similar to that of other specimens placed inside the pterosaurs.

In other words, this animal was in charge of capturing fish with its beak, using the ability to fly in order to find them, although it has not been possible to deny that the animal could also have fed on other animals that were on land and that were of smaller dimensions.

Another important detail about this specimen is that it probably used only two of its extremities to be able to move when they were on land.

This is an important difference from other specimens placed inside the pterosaurs, which used all four extremities, because there are fossil traces that give us this information.