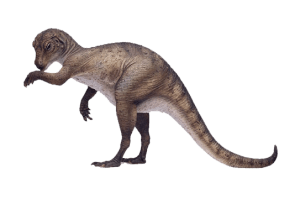 In this article we will deal with all the information related to heterodontosaurus: Was it carnivorous or herbivorous, what were its fangs for, all your questions answered below.

What does the name Heterodontosaurus mean?

The name “Tucki Tuck” honors the manager of the South African branch of the Austin Motor Company, which supported the expedition.

The first heterodontosaurus fossil was discovered by Robert Broom in the early 20th century but was recently recognized as such.

Broom sold the fossil in 1913, along with a large number of other fossils from South Africa, to the American Museum of Natural History in New York, where it was archived for study along with the fossil synapses from the Broom collection.

Barely a century later, Paul Sereno discovered the fossil during an inspection of the collection, which was still mostly enclosed in a block of stone.

During the subsequent preparation, a fragment of the skull of a young heterodontosaurus became evident.

In addition, parts of several cervical vertebrae were found behind the skull, indicating that parts of the remaining skeleton may also have been preserved at the site of discovery.

In 2012, Sereno published a monograph on the family Heterodontosauridae.

In the early 1960s, a partial skeleton with an almost complete skull appeared in the Transkei, located in the Eastern Cape.

The finding comes from the Clarens Formation and was excavated in 1961-1962 by Alfred W. Crompton during a joint paleontological expedition of the Iziko South African Museum and the British Museum.

In 1962, Crompton and Alan Charig published a preliminary description of the skull in Nature magazine and named Heterodontosaurus tucki as a new species and genus. 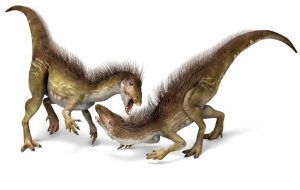 In 2011, David Norman and his colleagues published a more complete description of the skull; however, the rest of the skeleton has never been described and appears to be lost.

The skull is now preserved in the Iziko South African Museum in Cape Town.

The same area of findings was reexamined in the summer of 1966-1967 by another joint expedition;

In this expedition, five fossils of Heterodontosaurus were found, among which was the most complete discovery to date of this dinosaur: an almost complete skeleton with a skull.

This skeleton was also discovered by Crompton and was in better condition than the skull holotype.

The remaining findings include the frontal portion of a juvenile’s skull; two jaw fragments; and a partial skeleton, without a skull, that includes parts of the spine, the pelvic waist, and the front and back extremities.

A relatively large muzzle fragment was discovered in 1975 at Tushielaw Farm, about 60 km east of Voyizane.

This fossil has long been attributed to the Massospondylus prosauropod until Porro and his colleagues demonstrated in 2011 that the specimen preserved at the National Museum of South Africa is actually another Heterodontosaurus.

When and where did the Heterodontosaurus live?

The Heterodontosaurus fossils are from the Elliot Superior Formation and the Clarens Formation.

Formations dating from the Hettangian and Sinemurian Hettangiana and the Lower Jurassic Sinemurian, about 200 to 190 million years ago.

Heterodontosaurus probably lived in a dry, desert climate. Along with other dinosaurs such as Lesothosaurus, Megapnosaurus and Massospondylus, Amphibians, Turtles, Sphenodontia, Rauisuchia, relatives of crocodiles and various Cynodontia.

What did the Heterodontosaurus eat?

Given the characteristics of their teeth, there is a widespread debate about whether they were carnivorous or herbivorous, or even omnivorous.

All this controversy over relatively large fangs.

Some paleontologists claim that they did not play an important role in the diet and that they were only used to defend themselves against other males or predators.

While others claim that they were used to annihilate their prey.

The theory that also rests on the arms and hands, are relatively long and are also equipped with claws. Which allowed him to catch his prey.

In all this, some researchers settle the matter by establishing that it was most likely a herbivore and that they fed on small invertebrates within their reach.

Heterodontosaurus average only one 65 to 75 cm.

Despite its size, it is one of the representatives of the largest Heterodontosaurus, probably weighing between 1.8 and 10 kilograms. Only Lycorhinus could have been even bigger.

The skull was robust and appeared triangular in lateral view. The muzzle ends in a toothless corneal beak.

The orbits of the eyes were relatively large and round, their nostrils were small.

Undoubtedly the most striking feature of this dinosaur is the different types of teeth (heterodontics). 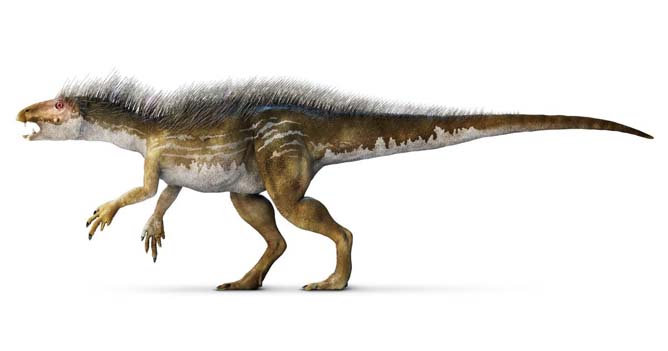 In addition, he had a pair of fangs in his lower jaw, which were larger than the upper fangs, and they fit perfectly between the three upper teeth.

The neck had a particular S-shaped shape, its body was short formed by only 13 vertebrae and about 6 sacral vertebrae located in the pelvic region.

The tail compared to its body was long; it consists of approximately 34 to 37 tail vertebrae.

His hind limbs were long, and they ended in 5 fingers that allowed him to hold what he wanted. The first three fingers had strong claws.