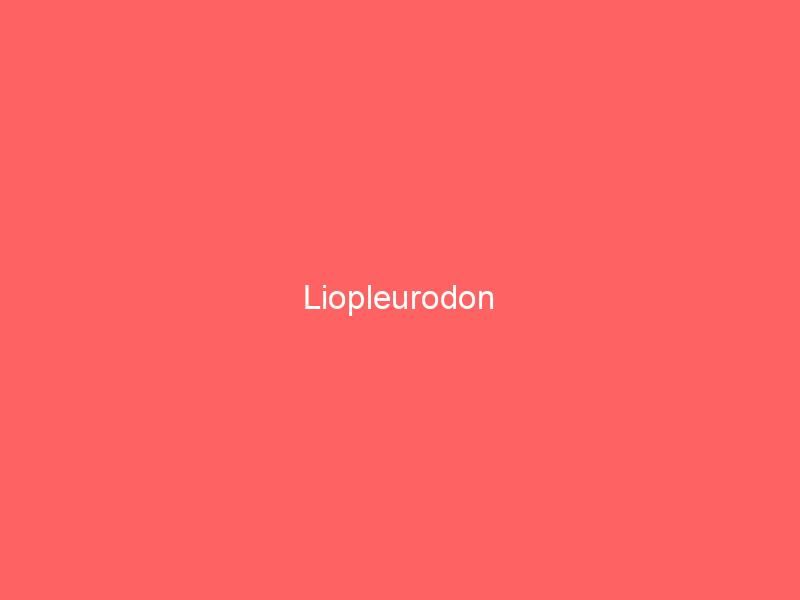 The continental seas of the Jurassic period encompassed a great variety of ecological niches which in turn led to the existence of a multiple diversity of food in the waters and therefore there was room for many different types of animal species to be supplied.

Thanks to this we can know the existence of many marine animals among which there are large predators like the one we are dealing with.

The Liopleurodon is one of the most terrifying sea animals of the middle and upper Jurassic. Its size and capabilities made it one of the most feared top predators of the Jurassic sea.

Just like the whales do today the Liopleurodon had to surface to get air this is because despite what many others think the marine reptiles were not equipped with gills.

This was a marine reptile, quite slim. In fact it’s considered one of the largest creatures to have existed in the Jurassic. It even takes the title of super predator, so let’s look at some of its features:

The taxonomy of Liopleurodon

The Liopleurodon belongs to the order of the plesiosaurs, which includes all the prehistoric marine reptiles. These were sauropods that appeared in the early Jurassic and inhabited until the end of the upper Cretaceous.

They are often mistakenly called marine dinosaurs, however, they are far from being so. They are mainly characterized by having a wide body and an elongated tail. Next, let’s see the taxonomy of the Liopleurodon:

About the species, have been found about 5 species over the years then I leave you the list:

Some scientists and paleontology fans have dared to say that it is very possible that some plesiosaurs did not become extinct and that today they live in the depths of the oceans. What do you think?

What does the name Liopleurodon mean?

Like many of the dinosaurs discovered, this one was named after fossils found in the area, trying to highlight its most remarkable feature. In fact it was named with virtually no fossil evidence, only three teeth.

Its name translates from Greek and means “smooth-sided teeth”. It comes from the words “λεία” (read) which means “side”, the word “plevrá” (plevrá) which is understood as smooth and “δόντια” (dóntia) which is translated as tooth.

The first remains found of this dinosaur were only about three teeth of about 70 centimeters long (Finding that defined its name). The name was assigned by the paleontologist, ichthyologist and herpetologist Henri-Emile Sauvage in the year 1873.

With respect to the third tooth there was first a confusion. It was first described as a Poekilopleuron. However, after comparing this tooth with the two previous ones, it was found that they belonged to the same genus and it was called Liopleurodon bucklandi. However, this fossil is not currently recognized as a species of this animal.

The fossils discovered in 1869 that were initially attributed to Pliosaurus are today attributed to Liopleurodon. More exactly like the species L. pachydermus which was described by Seeley.

Later the species Liopleurodon rossicus was found in the beds of the Volga River in Russia. It was first described as a Liopleurodon. However, in 2012, Knutsen reclassified it as a Piosarium.

Are there any more complete remains?

If there are more complete remains. In fact, as we well know when only dinosaur teeth are found, or in this case a marine reptile, Paleontologists rely on the characteristics of its closest relatives to draw conclusions about a genus of which there are no remains.

In this case it was initially done in this way, however. In 1873, very complete remains of the species L. ferox were found. It became then a great source of information to know a little more about this fascinating creature.

These fossils consisted of a single skull. This skull was in very good condition and almost all the teeth in the jaws were intact. Based on comparisons with the Kronosaurus, it was determined that the Liopleurodon skull was approximately one-fifth the length of the body.

It existed in the upper Jurassic period. It is believed to have inhabited the earth between 162 and 153 years ago. Being one of the largest creatures of that time, it is also part of a select group of mega predators.

About its habitat it is easy to deduce that it lived in the open sea, due to its large size which was not adapted to live in shallow water.

Liopleurodon was a fast swimmer, although they were one of the first creatures to populate the seas and were not perfectly adapted like sharks are today. Its four fins were enough to swim and hunt the most elusive of prey, as they were long, flat and wide.

The liopleurodon was a carnivore with a large mouth up to 2 meters long and a large row of sharp teeth (even larger than those of the T-rex). It is believed that it fed on other swimming reptiles.

In fact, some fossil evidence suggests that it fed mainly on Ichthyosaurs, and in some other fossil remains of plesiosaurs there are marks of liopleurodon teeth. Some palaeontologists even suggest that it fed on lamniforms.

It must be said that it basically fed on other predators, this was possible thanks to its great size and evident strength, which allowed it to face any creature that crossed it.

Physical features of the Liopleurodon

The Liopleurodon, is part of the plesiosaurs of the upper Jurassic, in this time of the Jurassic already towards the middle and end of the same one there was a clear difference between the plesiosauroids (plesiosaurs that were characterized by his long neck as for example the muraenosaurus) and the pliosauroids whose more notorious characteristic was his great head, the Liopleurodon forms a part of these last ones, the pliosauroids.

The body of the Liopleurodones is hydrodynamic and compact, perfect for swimming and having a great speed in the water. Together with the shape of its body its fins accompany it to be a perfect swimmer, the movement it has with its fins is very similar to that of today’s sea lions.

With all these data and latest findings in Mexico it is believed that this Jurassic marine animal was larger than the recorded size of 25 meters. Thus, the Liopleurodon became the largest carnivorous vertebrate known.

In addition to its size, its teeth are as surprising as powerful, 20 cm long, three quarters of which are roots that allow it to bite its prey with enormous force. The strongest teeth were in the front of the mouth.

The white shark of the Jurassic period

In the Jurassic period, the Liopleurodon could be like the white shark we know today since it was one of the great predators of its time. Fossils of half-devoured Ichthyosaurus skeletons and bones of other plesiosaurs have been found with marks of the Liopleurodon’s teeth, indicating the large size of the prey it was capable of hunting.

In addition to its strong and large teeth of twenty centimeters and its powerful fins, one of the characteristics that gave it great power was the location of its nostrils in the skull that enabled it to detect its prey from many kilometers away.

Of course, the Liopleurodon was a great marine animal of the Jurassic with a strong beauty and a devastating presence.

Liopleurodon had a highly developed sense of smell, thanks to the skull fossil. It can be deduced that he had a great sense of smell and was able to locate his prey from a considerable distance.

It is believed that it was a very territorial animal and therefore became aggressive. In fact, many biologists and paleontologists point out that it most likely had vast territories of home. Territories that it defended from any intruders.

Some believe that clashes between Liopleurodones were very frequent, whether over territory or females. The latter could go freely through the territories as it was the males who had the territorial behavior.

The cubs used to stay with the mother for a while until they were able to fend for themselves. In addition, the mother had to protect the calves from other males as they could devour them. This also caused clashes between males and females. So it is believed that not many youngsters reached a mature age.

Liopleurodon starred in one of the episodes of the popular bbc series walking with dinosaurs. In which they were depicted with huge bodies over 25 metres long. However, today we know that they could only measure between 6 and 7 meters.
No doubt this giant of yesteryear was at the top of the food pyramid, but fortunately for many animals today it is now extinct. What do you think, I hope you liked this article and I invite you to learn more about dinosaurs on this page.