Lusotitan is not a well-known genus of dinosaur, besides being commonly confused with Brachiosaurus, which is much more popular and actually has a more than curious resemblance.

The Lusotitan is a genus that only has within it a species with the same name. He lived at the end of the Jurassic period, some 150 million years ago, and most of the specimens found give clues that most of them lived in Europe and, above all, in Portugal.

It is part of the order of the saurísquios, exactly of the suborder of the sauropods, and was a herbivorous dinosaur. Their diet consisted mostly of plants, using their long necks to reach them regardless of the height of the trees.

As for its morphology, it was between 25 and 27 meters long and 11 meters high and weighed around 30 tonnes. It could be considered a dinosaur of more than great size and height.

The first skeleton of Lusotitan was discovered in Portugal in 1947 by Manuel de Matos, who found parts of the skeleton of a sauropod of considerable size.

It was not until 1957 that Albert-Félix de Lapparent and Georges Zbyszewski named this new dinosaur after him, naming it Brachiosaurus atalaiensis, believing that it was part of the Brachiosaurus genus and using the place of discovery (Atalaia) as a differentiating element of this specimen.

However, in 2003, Octávio Mteus and Miguel Telles renamed this dinosaur back to the name we know today: Lusotitan. The name is composed, as we can see, of’Luso’ (inhabitants of Lusitania or present-day Portugal) and’Titan’, which refers to the mythical giants of legends.

Similarities between the Lusotitan and Brachiosaurus 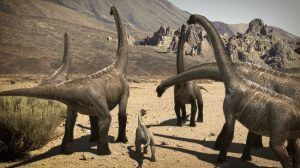 Finally, let’s see if the similarity that is so much talked about between the two specimens is true or not, as the morphology is practically similar.

In fact, both are part of the family of brachiosaurids and, in addition to resembling each other, they are very similar to others such as Diplodocus or Apatosaurus, although the latter has a characteristic tail that sets it apart from the rest.

There is not much more information about this Lusotitan and, in fact, his research is one of the most active on the Iberian Peninsula today in terms of dinosaurs. If you know more details about this giant or you want to add any detail to the article, you only have to comment and we will be happy to continue completing it.