A dinosaur who enjoyed birds

The Ornitholestes was a genus of dinosaurs that inhabited the Earth during the Jurassic period (approximately 145 million years ago). It is classified within the group of Saurian dinosaurs saurischian theropods celurosaurian.

The specimens of this genus would have been small in size. It was about 2 meters long, half of which corresponded to the length of its tail and about 80 centimeters in height. Not one of the smallest dinosaurs ever found, but perhaps one of the lightest, as it weighed only about 13 kilos.

Want to know more? Below you will find the most complete Ornitholestes information of the Spanish-speaking network. Read on and find out all about this carnivorous Jurassic dinosaur!

It is named that way because he was one of the most skilled animal hunters we identified as a bird, is also called a theropod and all the details or knowledge we could get to know about this unique specimen is thanks to a structure of fossils discovered in the early twentieth century, in a mine named Bone Cabin, in the state of Wyoming.

These vestiges were found in a place very close to what we know as Medicine Bow, from then on one of the most prestigious scientists of that time, Henry Fairfield Osborn, was in charge of reviewing the specimen, precisely three years after the discovery.

What is truly curious and mysterious is that of all the vestiges that were found in the aforementioned place, only one hand was considered part of the Ornitholestes, while the other vestiges found are supposed to belong to another specimen known as Tanycolagreus, a truly anecdotal fact.

Many of the qualities of this specimen are quite similar to those of a dinosaur that we have already studied on this site, the famous Compsognathus, however, these similarities are due to the fact that he was a celurosaurian (belonging to the Coelosauria clade), which explains everything.

It is an animal that based its diet or food on the consumption of meat, whose favorite habitat were places with lots of vegetation or lush forests, where it could hide very easily to hunt its next victims, thus obtaining food to survive in those prehistoric times.
Among his favorite prey we can mention several lizards and even many mammals that lived at the same time as him, but there is also the possibility that the Ornitholestes has taken behavior that is typical of a scavenger and has taken advantage of the opportunities and prey that other animals were able to capture, a quality that is not entirely ruled out today.

Previously we had mentioned that this specimen had a certain resemblance to the Compsognathus, however, this animal retained larger dimensions, because it could measure more than 200 centimeters in length and about 80 centimeters in height, while its weight rolled 13 kilos. 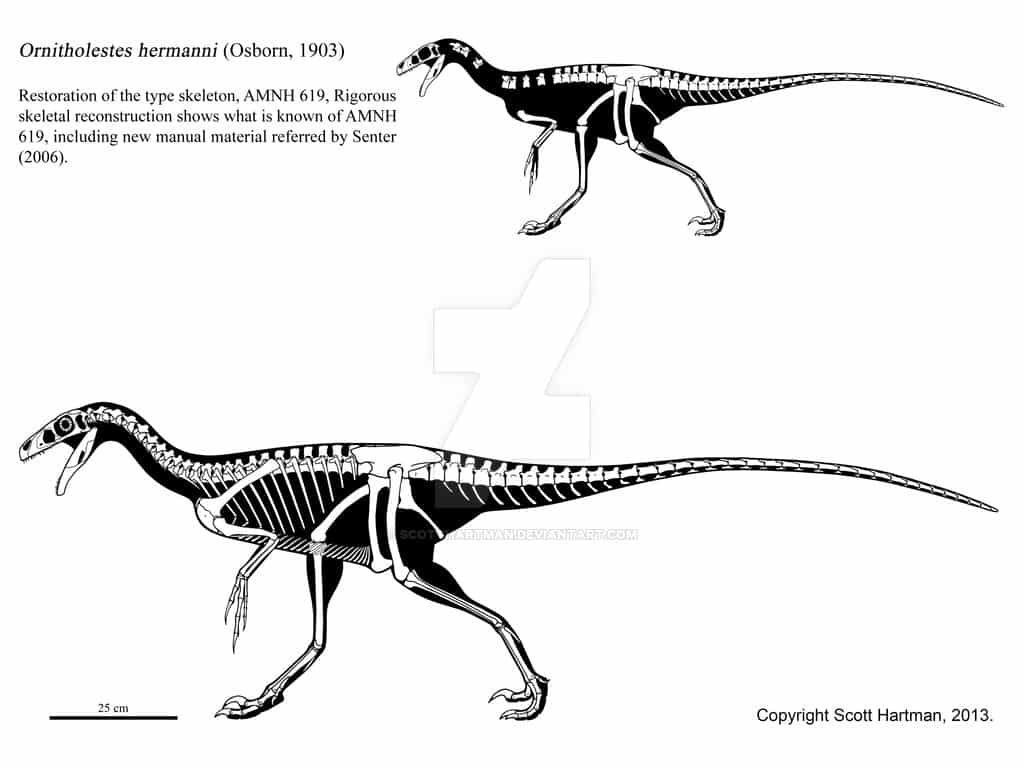 If we look closely at the animal’s skull we can see that in reality, it was not of a considerable size, the dental elements of the specimen had the quality of being sawn, so it can be assumed that their main prey were animals of a small size that did not cause much trouble when captured.

If we keep looking for similarities or differences of this specimen with other dinosaurs, we will soon realize that the skull, despite not being of a large size, was still much more robust than the skulls that we can observe in other small size theropods, so we can also presume that the shape and power of the bite of the Ornitholestes was not something to ignore.

Gregory S. Paul made the following statement: the protuberance found precisely in the area of the muzzle of this specimen was quite similar to the protuberance of the Proceratosaurus in the same area of its body.

On the same detail appeared another scientist, Carpenter, who said that the bump was actually a bony element that belonged to the nose, but at no time referred to it as a true ridge, something that fascinated many fans, so they believed it was a ridge.

As for its tail, we can say that it had a considerable length, so it was quite useful when the animal can control its own balance.

There are still many heated discussions about various details of the animal, however, in 1903, a researcher named Osborn was responsible for explaining to the world that this specimen would have learned the art of hunting very quickly, even though he had the great ability to hunt birds that lived at the same time, probably could make such catches only using his hands.

Osborn himself, after intense years of study and research, became obsessed with the fossil hand that had been found, and in 1917 he was in charge of denying his own theory. He clearly determined that the animal’s hand was incapable of carrying out his own hunting maneuvers, at least not bird hunting, for which he was criticized in a very ferocious way during those years, since he had managed to make the entire scientific community believe that a fact that was, in the end, totally wrong.

On the other hand, we will also meet a scientist named Bakker, who launches a less controversial statement and assures that the animal could only have fed on mammals of a small size, something that was quite obvious because the animal was not large either.

This Ornitholestes in our culture

If you’ve liked many cartoons and noticed a series called “The Consecration of Spring”, you probably would have seen it in those scenes, and you can also see other examples known as Archaeopteryx.

If you are a fan of the famous series called “Walking with Dinosaurs”, it is quite possible that we have seen this dinosaur represented as the powerful animal that hunted other smaller animals identified as Dryosaurus.
There is also a small work called “The Ballad of the Great Al”, in which this specimen makes its appearance and its intention, in this special one, is to devour all the brothers of the protagonist known as Al.

In addition to this, we also have a novel entitled The Lost World’, the author of which is none other than Crichton himself, in which one of the protagonists, who is actually a researcher, was studying in detail the remains of an animal that probably belonged to the dinosaur that was the subject of this text.