What does the name Shunosaurus mean?

The name of this dinosaur derives from the term’Shu’, the ancient name by which the Chinese province of Sichuan was known and the term’saurus’ meaning’reptile’.

While the name of the species “lii” pays tribute to the famous hydrologist Li Bing, governor of Sichuan in the 3rd century BC.

History of the Shunosaurus discovery

The first fossil remains of this dinosaur were found in 1997 by a group of young students in the middle of a practice excavation.

These fossils were described later in 1983 by the research group formed by Dong Zhiming, Zhou Shiwu, and Zhang Yihong, who called it Shunosaurus li.

The remains were found in what is known as the formation of the lower Xiashaximiao and consists of a well preserved partial skeleton.

However, it would not be the only discovery, as more than 20 more would be discovered later.

Complete and partial fossils, skulls and some young specimens could be found.

With a lot of fossil material, it was relatively easy to gather a lot of information about this dinosaur, making it the best-known sauropod with almost all of its bones identified.

Several skeleton skeletons are exhibited at the Zigong Dinosaur Museum in Sichuan Province and others at the Beijing Natural History Museum.

In terms of species, the Zigong Museum refers to the species S. ziliujingensis, which is mentioned in the museum guide and refers to a smaller and probably older specimen. But this species has never been made official.

At first, this dinosaur was classified as a Cetiosaurinae; then it was reassigned by Dong as a Shunosaurinae within the Cetiosaurus.

Later, after a cladistic analysis, Paul Upchurch assigned him to Euhelopodidae in 1995, as well as other Chinese Jurassic sauropods.

Later on, Jeffrey Wilson in 2002 would classify him as an Eusauropoda.

When did the Shunosaurus live?

According to where this dinosaur was found, the formation dates from the Middle Jurassic.

This formation is from the middle Jurassic age, probably from Botonian, that is, about 165 million years ago.

What did the Shunosaurus eat?

As is characteristic of all sauropods, they were herbivores; they grazed and ate tall plants.

Their teeth and jaws were designed to crush strong plant material.

First of all, it is estimated that it could reach a length of 11 meters, although the discovery of other fossils suggests that they could have been smaller.

It could also reach a weight of 3 tons. 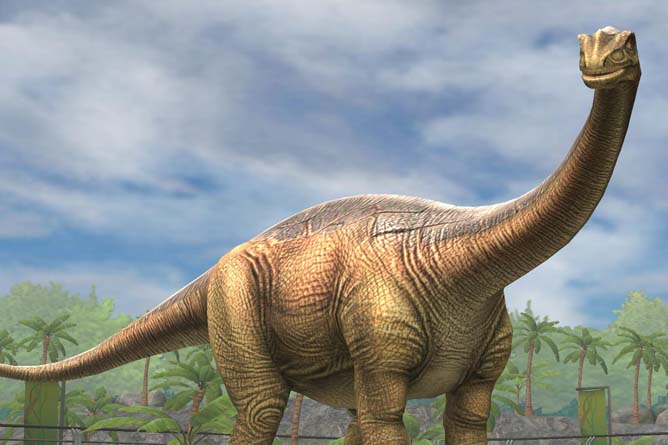 Unlike other sauropods, the Shunosaurus had a relatively shorter neck, being only “surpassed” in this sense by Brachytrachelopan.

As for his skull, most of them are not reliable enough to give an accurate description.

In fact, some suggest that the shape of his head was wide and short, while others suggest that it was narrow and elongated.

This is because most of them are compressed or disarticulated.

As for the jaws, they were facing upwards, which allowed him to cut the branches more easily as if they were garden shears.

On the other hand, the teeth were quite robust and elongated.

His body had a cylindrical shape, which sprouted into a pointed tail.

In addition, in 1989, it was revealed that its tail was possibly ended with a mace, accompanied by two peaks.

These peaks were probably used to defend himself against predators that were very diverse at the time.